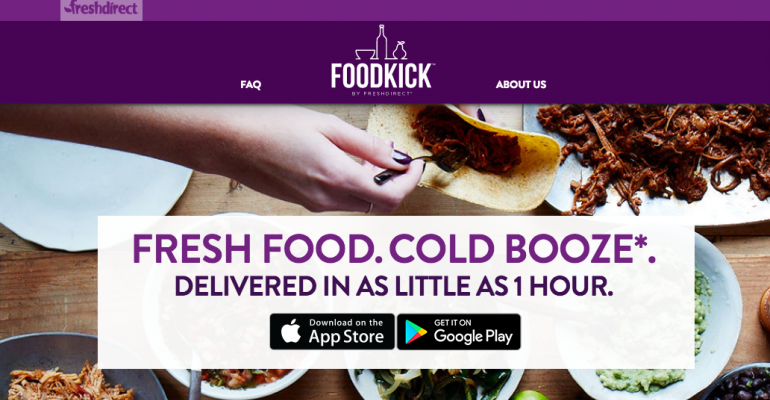 FreshDirect to expand behind $189M investment

Internet food retailer FreshDirect on Monday said it is eyeing new geographic markets and an expansion of its on-demand FoodKick brand after closing on a new investment of $189 million led by J.P. Morgan Asset Management.

J.P. Morgan made the investment on behalf of its PEG Digital Growth Fund II L.P. Other investors include returning investor W Capital and the AARP Innovation Fund.

The investment will help support expansion of FoodKick, FreshDirect's mobile-based "on demand" food delivery business that launched earlier this year in Brooklyn and Queens. FreshDirect said performance of FoodKick, which offers a curated selection of localized food, alcohol and essentials, exceeded expectations and will soon expand service to Manhattan.

“As demand for fresh ingredients delivered to your door continues to rise, high quality food, produce and packaged goods providers are drawing significant attention from the investment community,” Unrein said in a statement. “FreshDirect is one of the first to connect its customers with farmers and artisans at the click of a button. The company is also expanding its reach through the new mobile, on-demand offering FoodKick. By meeting the demands of the modern shopper on these two fronts, FreshDirect remains a forward thinking leader in this growing market segment.”

“We are thrilled to partner with a group of world-class investors led by J.P. Morgan Asset Management at this pivotal time for FreshDirect," Jason Ackerman, FreshDirect’s co-founder and CEO, added. "The funding will fuel expansion into new markets, increase capacity with new manufacturing and distribution facilities, and launch new businesses that meet today’s consumers’ needs as their preferences and buying habits evolve."

“FreshDirect is an established innovator, has a solid roadmap for growth and a large addressable market. We were passionate about FreshDirect a year ago and believe the company is well positioned to continue to lead the online food retail sector. We’re grateful for the opportunity to increase our share,” Katie Stitch of W Capital Partners, said.