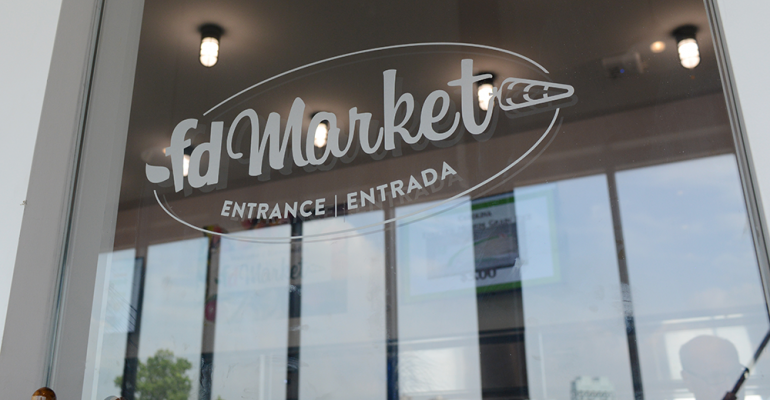 Photos: Gloria Dawson
Employee benefits at the new Fresh Direct facility in the Bronx, N.Y., include a small grocery store with discounted items for employees to purchase after their shift.
News>Online Retail

The 400,000-square-foot facility was celebrated for its potential for job growth

FreshDirect officially unveiled its new facility on Tuesday in the South Bronx. The opening of the 400,000-square-foot facility was attended by local politicians and community members. The company was celebrated for its commitment to the borough and the potential for job creation and collaboration.

"What is happening today is a catalyst for the borough moving forward,” said Rubén Díaz Jr., the Borough President of the Bronx, during the event. He noted that FreshDirect sells 60 products made by local businesses and helped launch a pilot program to deliver groceries to food stamp recipients in specific areas of the Bronx.

Jobs were on the front of mind for of all speakers at the event, which included a video address from Chuck Schumer, the U.S. Senator from New York. According to the company, FreshDirect has hired more than 1,500 employees from the Bronx since 2014.

“While our customers pay our bills, our employees get the work done,” FreshDirect CEO and Co-founder, Jason Ackerman during the event. Employee benefits include an apprentice program for skilled positions such as butchers, a cafeteria with subsidized meals and a small grocery store with discounted items for employees to purchase after their shift. Personal shoppers who pick products for customers’ orders work with the same 20 to 30 products in order to gain expertise, and these personal shoppers work from stationary pack stations for a more efficient and ergonomic environment, according to the company. The environmentally friendly and energy-efficient campus is also equipped with robotic pick towers, smart routing technologies and nine miles of conveyor belts. The new facility “enables FreshDirect to transition from cardboard delivery boxes to recyclable bags. There will also be less food waste through a combined approach of innovation and community outreach,” according to a release from the company. The campus is temperature controlled for specific grocery departments such as meat, deli and bakery, along with a specific freezer room for premium ice cream.

“The launch of the FreshDirect Campus is the culmination of 16 years of learnings that have enabled us to reinvent the grocery industry with customer experience, food quality, and sustainability at its core,” Ackerman said in the release. “This marks a pivotal moment for our business, while positioning us for future growth. We can also better serve the community by providing greater access to fresh food and significantly reducing food waste, cardboard use, and energy consumption. We are thrilled to officially be a part of the Bronx community and are very thankful for the local support we’ve received throughout this journey.”