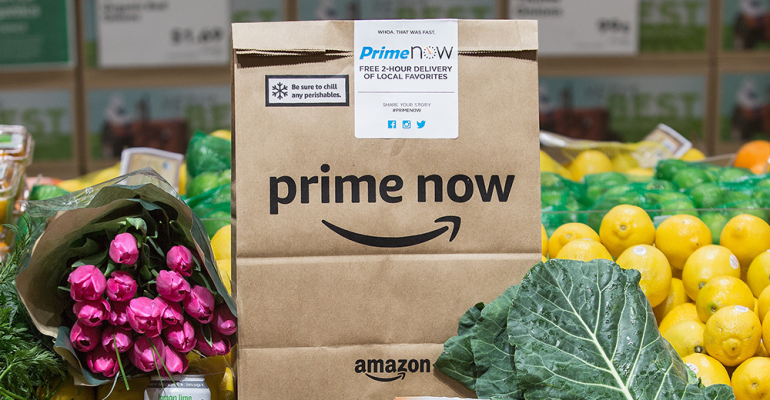 With the expansion, 53 metropolitan markets now offer the delivery service, which brings online grocery orders to consumers’ doors in as soon as an hour. In late September, Amazon and Whole Foods had rolled out Prime Now home delivery to another 10 cities, including stores in Detroit and Ann Arbor, Mich.; Jacksonville, Fla.; Milwaukee and Madison, Wis.; Omaha, Neb.; Orlando and Tampa, Fla.; St. Louis; and Tulsa, Okla.

Via the Prime Now app or website, Amazon Prime members can shop thousands of items in such categories as fresh and organic produce, bakery, dairy, meat, seafood, floral and daily essentials and have them delivered directly to their door or pick them up at a Whole Foods store. Select alcohol is also available for delivery or pickup to customers in Cleveland, Dayton, Omaha and the San Francisco Bay Area.

“Prime Now delivery continues to be a hit with our customers, and we’re excited to introduce the service in five new cities plus more neighborhoods in the San Francisco Bay Area,” Christina Minardi, executive vice president of operations at Whole Foods, said in a statement. “And for our customers in Dayton, Louisville and Omaha, we’re thrilled to also offer the option of grocery pickup. It’s just another way we’re making it even easier for more customers to enjoy Whole Foods Market’s healthy and organic food.”

Brick Meets Click reported that Amazon maintains a dominant position in online grocery but has room for improvement. The strategic advisory firm’s most recent consumer survey, which polled over 4,800 adults, found that Amazon captured 30% of U.S. online grocery spending — matching the share held by the overall supermarket channel.

“Amazon could still do it better, in that they've got too many portals, where it's Amazon, Amazon Pantry or Amazon Fresh. There needs to be some type of consolidation. It's too complicated,” Mandeville said at a recent Supermarket News financial analyst roundtable. “That's cost-prohibitive from their standpoint and from the experience of the customer.”