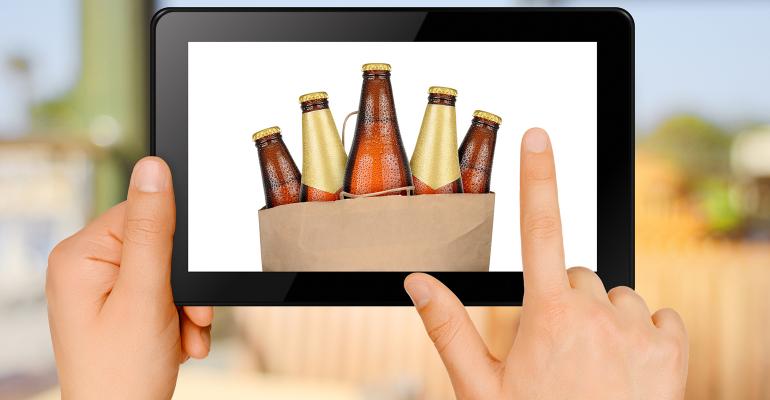 Grocery retailers that offer ecommerce are poised to gain significant market share in the home delivery of beer and wine to consumers, according to a report from investment firm Rabobank.

The growth of online alcohol sales through grocery ecommerce will be driven in part by the projected expansion of online grocery shopping overall, according to Rabobank. The firm cited a forecast from Nielsen that online grocery will grow from 2.5% of total sales currently to 14% by 2025 as traditional operators react to pressures from Instacart, meal kits and Amazon.

“The Google data suggest that the share of alcohol sales coming online (currently 1.6%) will eventually catch up to, or even surpass, grocery overall,” the report stated.

Rabobank predicts that online alcohol sales will follow the pattern that has occurred in Europe, where Amazon’s alcohol sales grew by 96% and 230% in the UK and Germany, respectively, in 2017, according to research firm OneClick Retail. In addition, in the UK, 34% of beer drinkers regularly buy beer online, according to Profitero.

Currently the large-format brick-and-mortar grocery channel accounts for 25% of beer and spirits sales and 44% of wine sales in the U.S., according to Rabobank.

“As physical retailers move online, why wouldn’t consumers leverage their grocery checkout to get a bottle of wine or a six-pack of beer they would have otherwise bought in person?” Rabobank said in the report.

The online grocery channel will be particularly big for wine and beer, the report predicted. Although most states do not heavily restrict direct sales to consumers of those types of beverages by supermarkets, several states do have tighter restrictions on spirit sales.

The wine category will also benefit from its strong association with food, Rabobank said. In states that do not allow supermarkets to sell wine, one option might be for them to partner with or open stand-alone liquor stores, the report suggested.

Also playing in the grocery channel’s favor is a crackdown on interstate wine shipments. According to Rabobank, last year carriers including UPS and FedEx began refusing to ship wines across state lines from retailers that were not legally authorized to do so. These retailers, often outlets with a limited physical presence, have been capturing a significant share of online sales.

Amazon, which shut down its online wine store after the acquisition of Whole Foods to conform with regulatory restrictions, could still be poised to capture a bigger share of the wine-delivery market by leveraging the 300-plus liquor licenses that Whole Foods has, according to Rabobank.

When Amazon last month expanded its Prime Now delivery service to include same-day deliveries from Whole Foods in a handful of markets, it included the availability of certain adult beverages in the product mix, Amazon said in announcing the new offering.

And Kroger stores in the Richmond, Va., area recently added beer and wine to the roster of items available for online ordering and pickup through its ClickList service, according to the Richmond Times-Dispatch. Virginia passed a law last year to allow such sales.

“We’ve had requests from customers to offer alcoholic beverages since we introduced ClickList in 2016,” Candace Bingham, a division e-commerce field specialist with Kroger’s Mid-Atlantic division, told the newspaper.