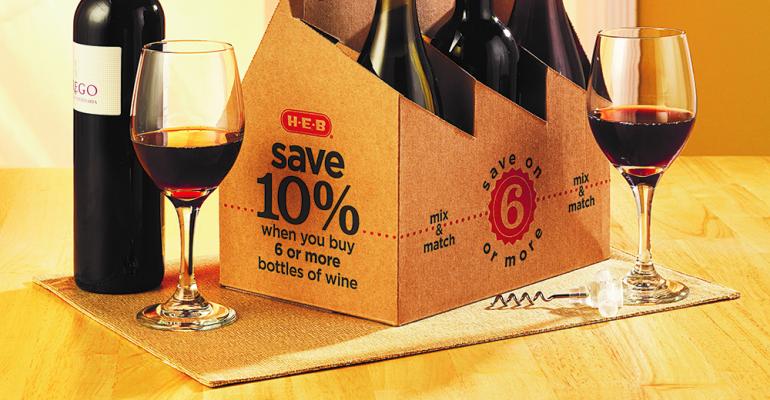 Heading into the Fourth of July holiday, H-E-B has launched same-day delivery for beer and wine order via its Favor e-commerce subsidiary.

The service kicked off just before the weekend in the greater San Antonio, Austin, Corpus Christi and Houston markets, the Texas supermarket chain said. Plans call for Favor to make the service available in more than 30 cities, with free one-hour delivery for beer and wine orders through Labor Day.

To order beer and wine for delivery, customers download the Favor app and tap on the H-E-B Beer & Wine banner or go online to FavorDelivery.com. Orders require a Runner tip, set at a minimum of $2, and the delivery charge for beer and wine is automatically waived. “The combination of H-E-B and Favor continues to be a win for Texans,” Jag Bath, CEO of Favor and chief digital officer of H-E-B, said in a statement. “Delivering almost anything in under an hour is what Favor is built on, and now with H-E-B we are excited to add the new category of beer and wine delivery to Favor’s on-demand platform.”

H-E-B said Favor will offer the grocer’s full selection of beer and wine at the prices found in stores, and there’s no order minimum. The chain noted that it’s the biggest craft beer and wine retailer in Texas, with offerings that include local, domestic and imported wine as well as craft brews from more than 100 Texas breweries, microbrews, seasonals, cider and sake.

Selections will vary by city, according to H-E-B. Customers can browse featured selections from the retailer’s expert wine and beer team or request custom beers and wines. Local selections will include craft brewers like Austin Beerworks, Big Bend Brewing Co. and Community Beer Co. and wines from the Texas Hill Country.

“This new service truly delivers the best customer experience — a fast, convenient solution with the best selection at the everyday low price our customers expect,” H-E-B Chief Operating Officer Martin Otto stated. “H-E-B and Favor joined forces to support and accelerate our collective growth throughout Texas, and this is only the beginning of what’s to come from our powerful partnership.”

H-E-B acquired Austin-based on-demand delivery provider Favor in February, and Bath’s appointment as chief digital officer — a newly created position — was announced in May. Favor’s service is now available in 50 cities across Texas.

Also on the digital front, H-E-B is working to expand its HEBtoyou Delivery and Curbside service to 200 locations this year from more than 100 locations currently. Customers also can order grocery, drug and general merchandise products online at HEB.com and have the items shipped to 48 states and military bases worldwide.