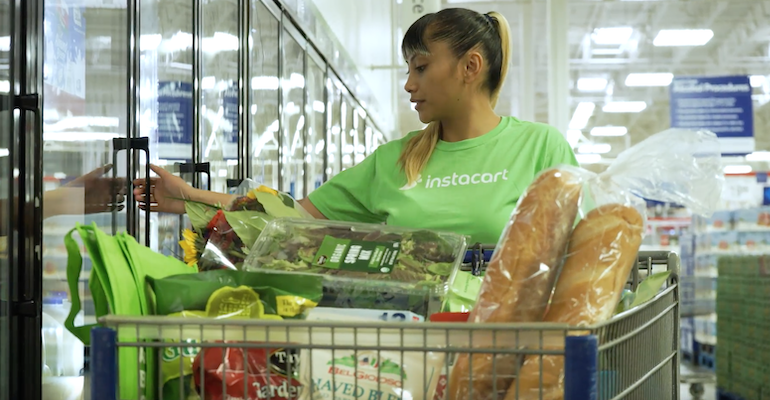 Instacart
Instacart said it added 70,000 jobs and $3.5 billion to the retail grocery industry in the early months of the pandemic, a time when many other sectors struggled.
News>Online Retail

Instacart has been a key job creator and revenue driver for the grocery industry, particularly since the onset of the COVID-19 pandemic, a new study from the online delivery giant finds.

From the start of 2013 through the second quarter of 2020, Instacart created about 186,000 jobs in the U.S. grocery industry and boosted total grocery revenue by $6.4 billion, according to an Instacart-commissioned analysis by Dr. Robert Kulick, associate director at NERA Economic Consulting. Those totals include roughly 116,000 jobs — or 70% of net grocery job creation — and $2.9 billion in grocery revenue generated by Instacart before the pandemic began, from the San Francisco-based company’s launch in 2013 through 2019.

Related: Instacart gets under way with 24/7 delivery 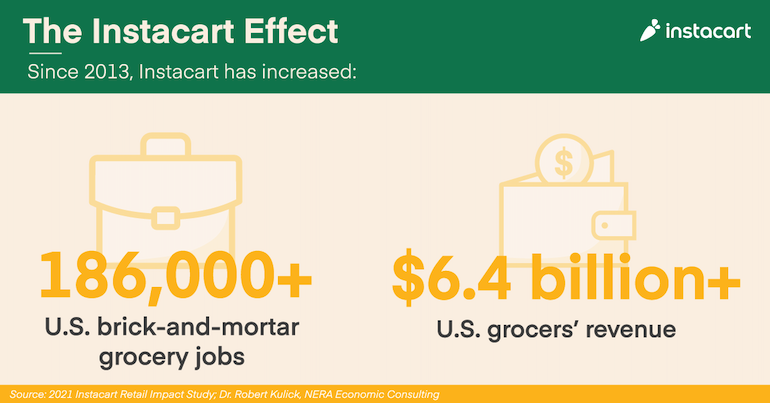 The research, released Thursday, revealed that Instacart also had a marked economic impact when the pandemic hit. During the early months of the crisis in the first half of 2020, Instacart added 70,000 jobs to the retail grocery sector, representing 92% of new grocery job creation at a time when many other retail segments, the company said.

Instacart also generated $3.5 billion in additional revenue for grocers amid that time frame.

“Instacart has been a catalyst for the U.S. grocery industry both before and during the pandemic,” Kulick said in a statement. “This analysis shows that, from its inception, Instacart has driven significant increases in U.S. grocery employment and revenue, and that during the COVID-19 pandemic, these effects have become even more pronounced.

"This ‘Instacart Effect’ — the causal relationship between Instacart’s growth and the growth of the grocery industry — is a national phenomenon benefitting retailers, workers, consumers and local economies," he noted.

The study’s results show that grocer adoption of Instacart’s service and technology to better compete spurs retailer growth, job creation and agility in responding to rapid demand changes, Instacart said. The company noted that the jobs created — such as cashiers, stock clerks, and bakery and deli counter associates, among others — would “not have existed in the absence of Instacart.”

The online grocery specialist added that it has “played a central role” in the grocery industry’s strong growth as many brick-and-mortar retail sectors stagnated in recent years amid the rise of e-commerce and the impact of the pandemic. 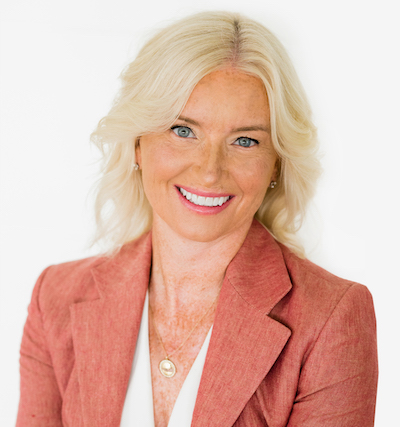 “If we can be that indispensable, strategic growth partner to help our grocers navigate the digital transformation and provide a great service to consumers, that’s a really great place for Instacart to be." — Carolyn Everson, Instacart

Carolyn Everson, president of Instacart, noted that the NERA analysis quantifies for the first time U.S. grocery industry job and revenue gains directly linked to Instacart since the company began commercial operations in 2013.

“What’s important about this is that we looked at it pre-pandemic and during the pandemic. One might just make an assumption, ‘Well, because of the pandemic, that is what drove the shift,’ ” Everson told Supermarket News in an interview. “But the shift in driving additional revenue online as well as additional jobs, that started before the pandemic.”

The NERA study’s findings attest to the power of Instacart’s e-commerce platform as an enabler for grocery retailers, according to Everson, who started as Instacart president earlier this month.

“What it says at the end of the day to us is that Instacart is very unique among e-commerce platforms. We are developing a symbiotic and mutually beneficial relationship with the grocery industry and its workers. And that, frankly, is what I’ve been hearing on my calls with our retail partners. The retail partners will say that Instacart is giving them a true, distinct edge in the area of accelerated e-commerce,” she explained. 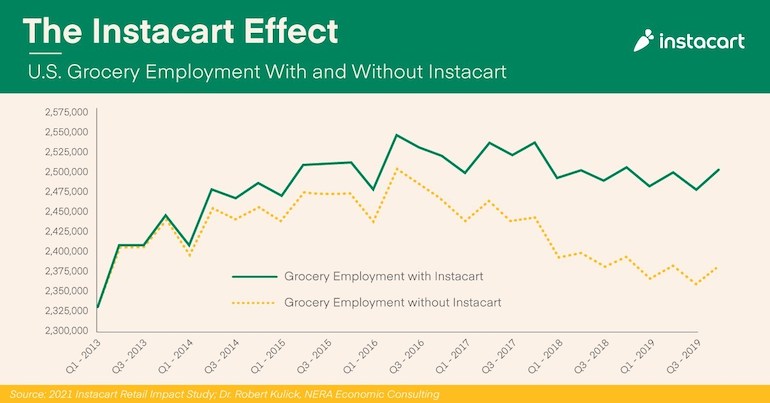 “If we can be that indispensable, strategic growth partner to help our grocers navigate the digital transformation and provide a great service to consumers, that’s a really great place for Instacart to be,” Everson added.

NERA’s latest Instacart research follows a smaller-scale study conducted by Kulick last year — and released just before the pandemic — that gauged Instacart’s economic impact  in California, New York, Illinois and Washington in 2019. Similarly, those findings showed that Instacart lifted U.S. retail grocery employment in those states by over 23,000 jobs, representing 4% growth in employment, and hiked revenue by more than $620 million.

Currently, Instacart partners with more than 600 national, regional and local retailers and delivers from almost 55,000 stores in over 5,500 cities (including all 50 states) in the United States and Canada. The company’s delivery service is accessible to more than 85% of U.S. households and 80% of Canadian households.

Boxed expands partnership with FedEx
May 12, 2022