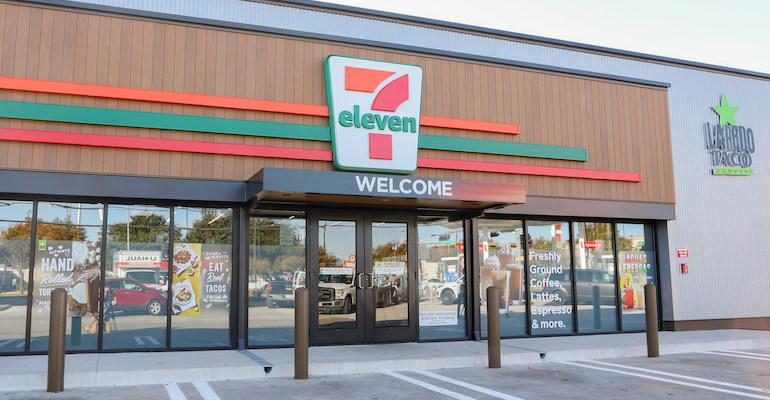 Eight months into their partnership, Instacart and 7-Eleven have rolled out same-day delivery to nearly 6,000 of the convenience retail giant’s U.S. stores.

San Francisco-based Instacart said Friday that the expansion brings its service to almost 4,000 new 7-Eleven stores nationwide. Last September, the companies announced the launch of their partnership with a rollout of Instacart delivery to more than 750 7-Eleven stores in the Dallas, Miami, Baltimore and Washington, D.C., metropolitan markets, with future expansion in phases to the chain’s 7,000-plus U.S. stores.

The 7-Eleven partnership marked Instacart’s entry into the convenience store arena. The expanded relationship reflects U.S. consumer’s embrace of convenience retailing for food, groceries and daily essentials as well as on-demand delivery, according to Chris Rogers, vice president of retail at Instacart.

“We know the way customers shop for their groceries and goods varies week-by-week. Sometimes people need a full fridge and pantry restock, and other times they just need a few things quickly like some snacks for the kids, a bottle of wine for dinner or over-the-counter medication to nurse a headache,” Rogers explained. “As more people turn to Instacart to help put food on their tables, we’ve seen customer demand for convenience retailers increase over the last year, with convenience orders on Instacart up by more than 350% since last August. To meet this growing demand, we’re proud to expand with 7-Eleven to nearly 6,000 stores, and give customers across the country access to thousands of essential goods they can now have delivered from the store to their door in as fast as 30 minutes.”

7-Eleven delivery via Instacart is now available in 33 states and the District of Columbia, extending access to the service to nearly 60 million U.S. households, the companies said. The convenience chain’s customers can shop online for thousands of products — ranging from pantry staples and household items to snacks and over-the-counter medicines — and have them delivered to their door in as soon as 30 minutes. 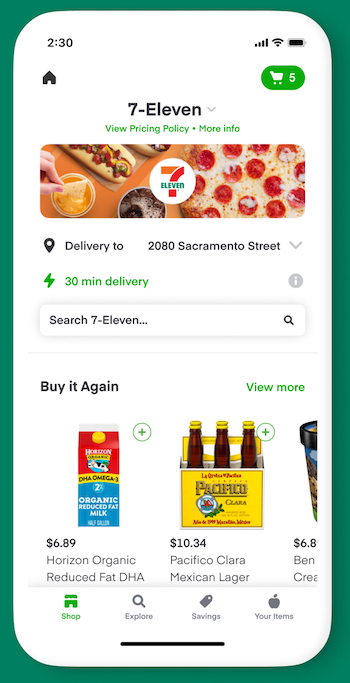 7-Eleven delivery via Instacart, accessed via Instacart's online marketplace or mobile app, is now available in 33 states and D.C.

To place orders for Instacart delivery, 7-Eleven customers go online to instacart.com/store/711 or access the free Instacart mobile app, enter their ZIP code, select the 7-Eleven storefront and begin adding items to their virtual shopping cart. Instacart personal shoppers then pick, pack and deliver the order within the customer’s designated time frame, which can be as soon as possible or scheduled days in advance.

In addition, consumers in seven states — California, Florida, Idaho, Illinois, Missouri, New York and Ohio — and D.C. now also have access to 30-minute alcohol delivery via Instacart from 7-Eleven stores. The companies said plan to enable alcohol delivery from more stores and in more states over the coming months.

“7-Eleven strives to be the world’s leader in convenience, which means giving customers what they want, when, where and how they want it,” Raghu Mahadevan, senior vice president and head of digital at 7‑Eleven, said in a statement. “Customers on Instacart can now benefit from thousands of products to be delivered from a 7-Eleven store to their door in 30 minutes or less.”

Overall, Irving, Texas-based 7‑Eleven operates, franchises and/or licenses more than 77,000 stores in 16 countries and regions, including more than 16,000 stores in the United States in North America. The retailer’s 7Rewards loyalty program has over 40 million members. Instacart’s service operates alongside 7-Eleven’s current delivery service, available in more than 1,300 cities through the 7NOW app.

Earlier this week, 7-Eleven finalized its $21 billion acquisition of Speedway convenience stores from Marathon Petroleum Corp., adding about 3,800 stores in 36 states to its retail network.