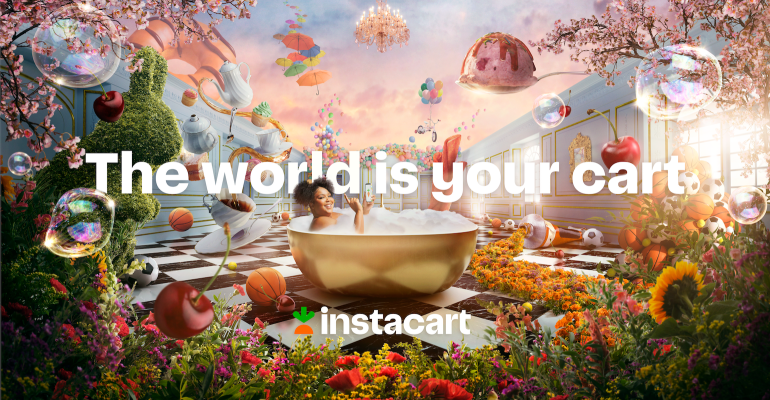 Instacart
The feature rolls out with the cart of musician and singer Lizzo — who is at the center of Instacart’s multi-faceted marketing campaign touting the new shopping option.
News>Online Retail

Move comes as company gears up for a much-anticipated IPO

As it gears up for an anticipated IPO, Instacart continues to invest in Gen Z-attractive features, with the launch of its new in-app shopping experience that leans into celebrity influencers.

Branded “The World is Your Cart,” the San-Francisco-based company is calling the shopping feature itself Carts, which encourages shopping centered around events (“Self Care Sunday,” “Game Day”) or via existing carts curated by celebrities. Users are then able to add the products to their own carts.

The feature rolls out with the cart of musician and singer Lizzo — who is at the center of Instacart’s multi-faceted marketing campaign touting the new shopping option. The campaign even kicked off during August’s VMA music awards ceremony (where Instacart was an official sponsor), with Instacart debuting a commercial starring Lizzo following an onstage performance by the singer.

The move comes as the company gears up for a much-anticipated IPO — Earlier this summer, Instacart rolled out a brand refresh, and in March the company launched another Gen Z-friendly shopping option, with shoppable recipes and a TikTok integration, which allows TikTok users to add grocery items used in the video to their shopping cart via one click.

So what can the grocery industry learn from Instacart’s latest moves? We spoke with Celia Van Wickel, senior director of digital commerce for data analytics and brand consulting company Kantar, about some key takeaways.

What do you think of this move by Instacart? And should traditional grocery be investing in influencer partnerships? Comment below and tell us.