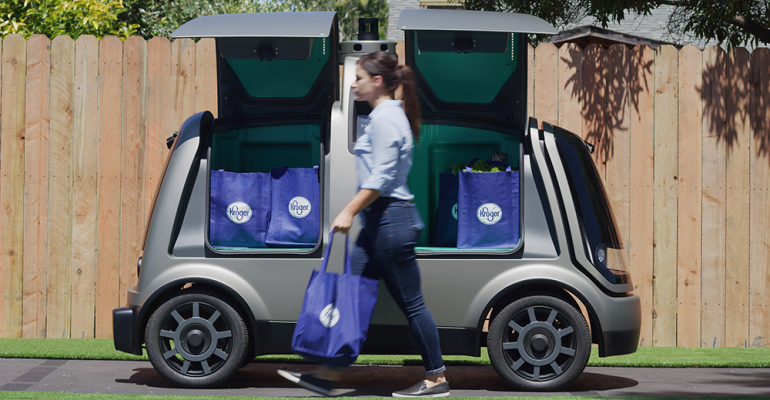 The Kroger Co. has kicked off online grocery delivery with Nuro self-driving cars in Houston.

Kroger said Wednesday that the Nuro delivery service is available now at its 10306 South Post Oak Rd. store and is slated to launch at its 5150 Buffalo Speedway store later this spring. Through the two locations, both under the Kroger banner, Nuro vehicles will serve the 77401, 77096, 77005 and 77025 ZIP codes.

Cincinnati-based Kroger and Nuro, a Mountain View, Calif.-based provider of robotics and artificial intelligence technology, had announced plans for the pilot last month. The test initially will use Nuro's manual and self-driving Toyota Prius cars and later this year will add Nuro's R1 custom unmanned vehicle.

The Houston pilot is Kroger’s second with the Nuro vehicles and will test the technology in a more populous metropolitan market. The companies, which announced their partnership last June, began testing autonomous delivery at a Fry’s Food Store in Scottsdale, Ariz., in August 2018 and then went live with the service in December.

"We're excited to launch our autonomous vehicle delivery pilot with Nuro in Houston, a leading city that embraces innovation and technology," Marlene Stewart, Houston division president at Kroger, said in a statement. "Kroger continues to redefine the customer experience, and we're thrilled to provide our customers with a new way to have their groceries delivered. We thank Texas Gov. Greg Abbott, Houston Mayor Sylvester Turner and the Houston community for being terrific partners and for supporting consumer-focused robotics."

Customers in the Houston ZIP codes served by the program will be able to place orders for same-day or next-day delivery via Kroger.com or the Kroger mobile app, based on time-slot availability. Available daily, the service will carry a $5.95 flat fee and require no minimum order.

In the Scottsdale pilot, which served one ZIP code, the service safely completed thousands of deliveries to customers, according to Kroger and Nuro. That test also started out using Nuro's Prius fleet and then switched to the driverless Nuro R1 vehicle.

Nuro noted that its latest launch with Kroger represents the first public use of its self-driving fleet in Houston.

"Nuro's initial application of transporting goods through self-driving technology has allowed us to build a real service and have immediate impact on communities," said Nuro co-founder Dave Ferguson. "We are excited to introduce Houston to our time-saving service that provides customers with their groceries quickly and safely."