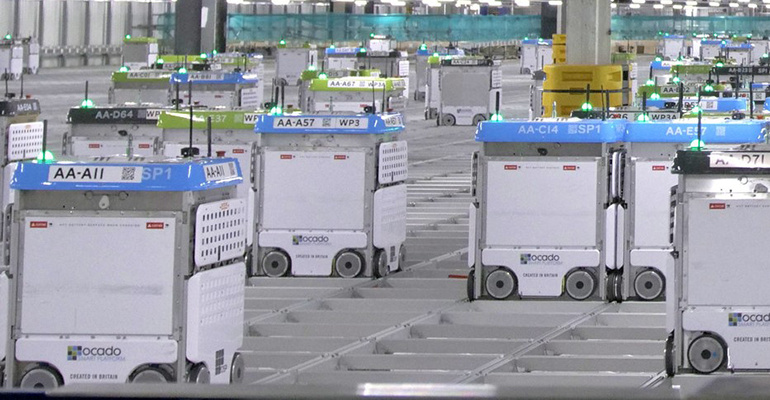 Continuing the ramp-up of its omnichannel capabilities, The Kroger Co. plans to build an Ocado-powered automated warehouse in between Milwaukee and Chicago.

“This project expands Kroger’s commitment to continued investment in Wisconsin and Illinois. With this cutting-edge technology, Kroger is confident our partnership with Ocado will play an integral role in the continued commerce growth of this dynamic region,” Kroger Roundy’s President Michael Marx said in a statement. “This transformative fulfillment center will create local jobs and accelerate Kroger’s ability to expand our products and services to a larger footprint, providing customers with anything, anytime, anywhere."

Cincinnati-based Kroger didn’t give a timeline for the groundbreaking at the Pleasant Prairie site but said the facility is slated to be up and running within 24 months thereafter.

“Kroger is incredibly excited to construct one of our industry-leading customer fulfillment centers in Pleasant Prairie, Wis., in relationship with Ocado, to bring fresh food to our customers faster than ever before,” said Robert Clark, senior vice president of supply chain, manufacturing and sourcing for Kroger. “Through our strategic partnership, we are engineering a model for the region, leveraging advanced robotics technology and creative solutions to redefine the customer experience for our customers in Wisconsin and Illinois.”

The Monroe, Groveland and Forest Park facilities are slated to become operational in 2021, with the Dallas center coming online by 2022. In February, Kroger also said it plans to build an Ocado automated warehouse in the Mid-Atlantic region, but it hasn’t yet specified a location.

Dubbed a “shed” by Ocado and Kroger, the automated warehouse uses digital and robotic technology to fulfill online grocery orders. When unveiling their partnership in May 2018, Kroger and Ocado said they plan to open 20s CFCs in the United States over the next three years. The companies aim to replicate the CFC model as they build the facilities across the country, extending Kroger’s online grocery reach, potentially into new markets where the retailer doesn’t have stores. The company has said the CFCs cost about $55 million apiece to build.

As with the other CFCs, the Pleasant Prairie facility is expected to provide up to 400 jobs, Kroger and Ocado said.

“We are excited to bring Kroger and Ocado’s latest automated warehouse to Pleasant Prairie. As this site develops and goes live, it will be instrumental in delivering fantastic grocery experiences and exciting job opportunities to households across Chicago, Milwaukee and beyond,” said Luke Jensen, CEO of Ocado Solutions, which has its U.S. headquarters in Tyson, Va. “Today’s announcement marks another big milestone on the road to developing a seamless fulfilment ecosystem for Kroger customers across the United States. Ocado’s proven technology will allow Kroger to achieve the lowest cost-to-serve in the market, combined with the best freshness, accuracy and service.”

The Ocado CFCs employ a centralized fulfillment model, which also has been adopted by other big grocery retailers such as Amazon, Ahold Delhaize USA/Peapod and Sobeys in Canada (another Ocado partner). These large facilities offer a high degree of automation — meaning greater productivity and order capacity — and because of their size can accommodate a broad assortment of products and serve a wide area.

However, a recent deep-dive report on online grocery fulfillment by analysts at Jefferies cited significant downsides to this model: CFCs are capital-intensive, can take years to build, are far away from customers (increasing time to serve) and may siphon store sales.

For Kroger, it will be couple of years before the first CFC opens, and the potential returns remain questionable on a total capital commitment of over $1 billion for 20 facilities, Jefferies noted in its analysis.

“Although Ocado has shown itself capable of standing up a profitable CFC operation in the U.K., we’d argue the U.S. is a completely different animal given lower population density, less-favorable income demographics for Kroger markets and the need to drive incremental sales — not cannibalize existing Kroger stores — to realize sufficient capacity utilization,” Jefferies said in its Oct. 10 report. “This also runs counter to our preference for a ‘test small, fail fast’ approach, as it could take three to five years before proven successful. Such risk gives us great concern.”

Amazon to receive warrants for stake in Grubhub
Jul 06, 2022