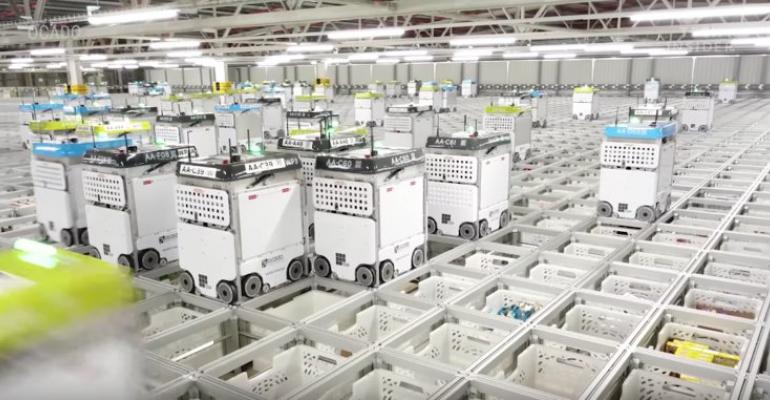 Ocado
Robots collect and pack orders at an Ocado fulfillment center in the U.K.
News>Online Retail

Automated warehouse facility to be first of online retail partnership

The Kroger Co. and the U.K.-based Ocado Group, partners in a highly vaunted online grocery business, announced today that their first customer fulfillment center (CFC) will be located in Monroe, Ohio, just outside of Kroger’s headquarters city of Cincinnati.

The CFC, also known as a “shed,” will be an automated warehouse facility with digital and robotic capabilities. Based on Ocado’s existing sheds in the U.K., the CFC model will be replicated to serve customers across America. Under the terms of the deal, Kroger plans to order three CFCs by the end of 2018 and 20 CFCs during the first three years of the agreement.

Ocado has agreed to deploy and maintain modules of mechanical handling equipment to provide a certain level of throughput. The company said the goal is for Kroger's CFCs to be up and running within about two years of each order being placed.

"Kroger is joining with the best partners in the world to co-innovate and leverage technology to redefine the customer experience," said Rodney McMullen, Kroger's chairman and CEO. "We are incredibly excited to partner with Ocado to transform the industry and deliver on our ‘Restock Kroger’ vision to serve America through food inspiration and uplift. This Kroger shed, powered by Ocado, will accelerate our ability to provide customers with anything, anytime and anywhere." (The video below illustrates how robots operate at an existing Ocado shed.)

Kroger is investing $55 million to build the first shed, which will measure 335,000 square feet and is expected to generate more than 410 new jobs.

"Kroger is committed to helping position Cincinnati and Ohio as a destination for digital and technology talent. We are proud to choose our HQ state of Ohio as the first location for this first-of-its-kind customer fulfillment center in the U.S.," said McMullen.

Earlier this year, Kroger and Ocado announced an alliance to bring to the U.S. Ocado's innovation and technologies. In October, the companies signed a master services agreement to further solidify their partnership.