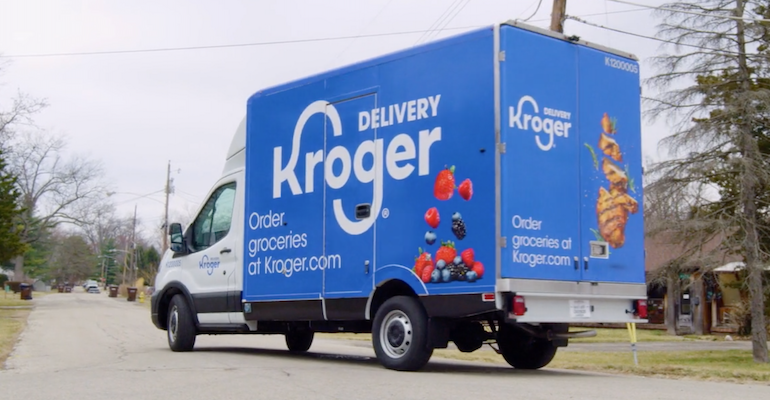 The Kroger Co.
Kroger said the 48,000-square-foot spoke site in Indianapolis will work with the 375,000-square-foot CFC “hub” in Monroe to process online orders with fresh food.
News>Online Retail

The Kroger Co. has launched an e-commerce “spoke” facility in Indianapolis to help fill online grocery orders in concert with the company’s Ocado-automated customer fulfillment center (CFC) in Monroe, Ohio.

Kroger said Thursday that the 48,000-square-foot spoke location, at 9222 E. 33rd St. in Indianapolis, will create 150 jobs and work with the 375,000-square-foot CFC “hub” in Monroe to process online orders with fresh food. At launch, the spoke will support Kroger Delivery service in 35 ZIP codes in central Indiana, mostly in the Indianapolis area but also in Richmond, Ind., which is near the Monroe facility.

“We’re proud to welcome the Kroger fulfillment network to Indiana,” Kroger Central Division President Colleen Juergensen said in a statement. “The new service is a wonderful addition to the expanding digital experience available to Kroger customers. The network’s delivery spoke will provide unmatched customer service and improve access to fresh food in areas eager for the variety and value offered by Kroger.”

Opened in April, the Monroe CFC was the first to go live among some 20 robotics-driven warehouses planned under Kroger’s partnership with United Kingdom-based Ocado. The Cincinnati-based supermarket giant has announced 16 CFCs so far, and two have begun operation: the Monroe facility and a 375,000-square-foot CFC in Groveland, Fla., which opened in June in a state where Kroger doesn’t have physical stores. 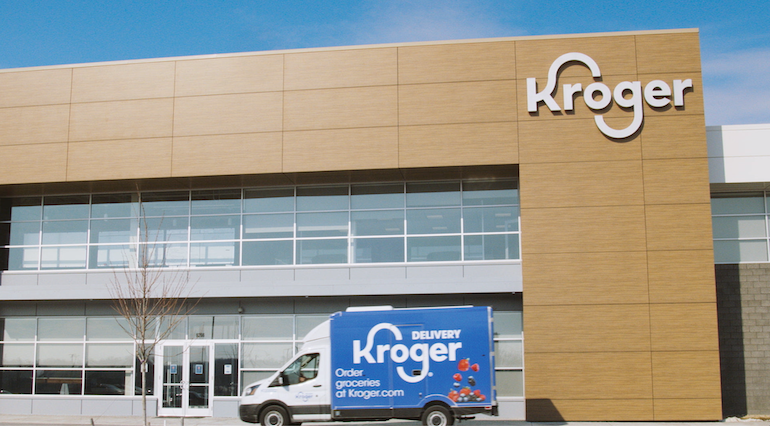 Thus far, Kroger opened two Ocado automated CFCs in Monroe, Ohio (above), and Groveland, Fla. The latter is supported by spoke facilities in Tampa and Jacksonville.

Last week, Kroger unveiled plans to build a 200,000-square-foot CFC in North Carolina, slated to go into operation within 24 months after ground-breaking on the site. The other Ocado CFCs disclosed by Kroger range in size from 135,000 to 375,000 square feet and include locations in Forest Park, Ga.; Dallas; Frederick, Md.; Phoenix; Pleasant Prairie, Wis.; and Romulus, Mich., as well as unspecified sites in the Pacific Northwest, West and Northeast, the latter representing another location where Kroger lacks stores. The retailer also has announced plans for two CFCs in Southern California and two more in Florida.

Kroger executives have said the company’s e-commerce fulfillment network will include not just the Ocado CFC hubs but also smaller facilities and spoke sites that will extend the area served by each CFC beyond its 90-mile range. Along with the Indianapolis spoke location, Kroger also has spoke facilities in Tampa and Jacksonville, Fla., working with the Groveland CFC. The network will also leverage stores and third-party partners to deliver certain orders.

“This fulfillment center is another example of how Kroger is transforming e-commerce in the grocery industry using a vertically integrated network to provide a reliable and consistent delivery service that repeatedly receives favorable customer feedback like a best-in-class Net Promoter Score,” Bill Bennett, vice president and head of e-commerce at Kroger, commented about the new Indianapolis spoke facility. “Our expansion in Indiana represents our commitment to delivering fresh, affordable food in both existing and new geographies.”

Kroger Delivery will offer variable delivery fees that don’t require customers to give a tip and are shaped by such factors as customer loyalty, delivery window popularity, route optimization and order lead time, Kroger said.

“As our e-commerce business accelerates,” Bennett stated, “we’re excited to continue expanding our reach and loyalty by delivering our customers an exceptional service for as little as $6.95, powered by high-tech facilities.”

Also expected to propel e-commerce growth is Boost by Kroger Plus, an annual membership program announced last month. The subscription comes in two membership tiers, priced at $59 or $99 per year. All members get free delivery for online orders of $35 or more and double fuel points (up to $1 off per gallon of gas) for each dollar spent on groceries and general merchandise. The $59 annual membership provides delivery within 24 hours, while the $99-per-year option offers delivery in as soon as two hours.

Kroger launched Boost by Kroger Plus through its Cincinnati-Dayton, Columbus and Atlanta and Central (Indianapolis) divisions. Plans call for the program to roll out to more regions next year.

Through the fiscal 2021 third quarter ended Nov. 6, Kroger’s digital sales were up 103% on a two-year stack. According to Kroger Chairman and CEO Rodney McMullen, Kroger Delivery “underpins the permanent shift in grocery consumer behavior and elevates our position as one of America’s leading e-commerce companies.”