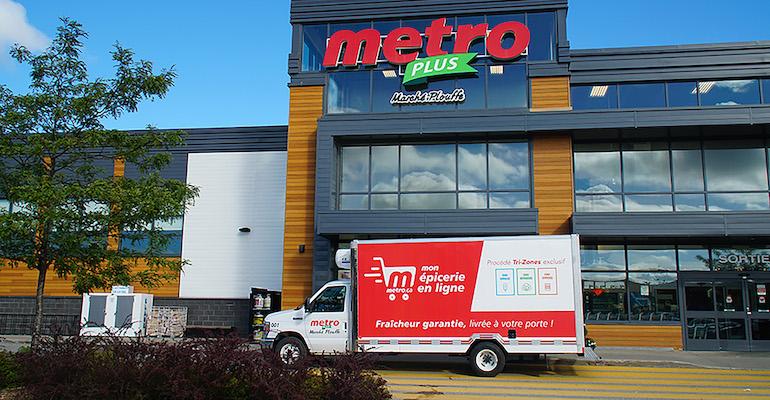 Metro Inc.
Metro plans to expand it hub store model to offer pickup service in about 30 stores in Quebec and Ontario in 2021.
News>Online Retail

Pickup and delivery services expand in Quebec and Ontario

Metro Inc. is pushing ahead with its omnichannel strategy with the opening of its ninth e-commerce hub store in Quebec.

The Canadian food and drug retailer said online grocery service kicked off yesterday at the Metro Plus Plouffe supermarket in Sherbrooke, Quebec. Serving that community and surrounding areas, the new hub store will give more than 73,000 households and over 160,000 consumers access to online grocery shopping and pickup service.

Metro noted that the Plouffe hub store extends its e-commerce reach in Quebec’s Eastern Townships and builds on online grocery deployments in the greater Montreal area and Quebec City and Outaouais regions. Launched in 2016, Metro’s online grocery service is currently accessible to more than 61% of Quebec’s population.

The Montreal-based company also is growing its online grocery presence in Ontario. Plans call for a third store to offer the service in the greater Toronto area (GTA) this fall. In addition, the company aims to expand it hub store model to offer online grocery pickup service in about 30 Metro stores in Quebec and Ontario next year.

“Today, the popularity of e-commerce is at a level we had expected to reach in the next two or three years. Over the past few months, we have been working very hard to meet unprecedented demand, and the addition of a store in Sherbrooke is part of our growth plan,” according to Christina Bédard, vice president of e-commerce and digital strategy at Metro. “Customers in the region will certainly appreciate this service, which the [store owner] Plouffe Group will offer with the same high standards of quality for which they are renowned in the region.”

With a mantra of “Fast and Fresh,” Metro’s e-grocery delivery service transports customer orders in a truck equipped with Tri-Zones temperate, refrigerated and frozen compartments to maintain food freshness. Products ordered for delivery or click-and-collect also are held in Tri-Zones inside the store as orders await pickup. In-store employees, too, are trained to select the freshest foods for customers, “as they would choose if they were shopping for themselves,” Metro said. The company added that delivery and pickup service is supported by Metro.ca and allows metro&moi loyalty program members to use their benefits online. 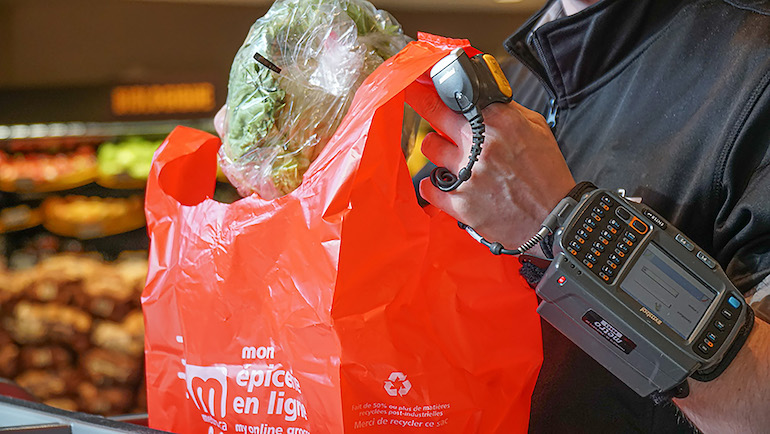 Metro noted that it trains its associates to pick the freshest foods for customers, “as they would choose if they were shopping for themselves."

In Metro’s third-quarter earnings call this month, executives noted the company’s efforts to accelerate its plan to increase online grocery capacity. Online food sales jumped 280% in the quarter, and the hub store model is expected to help the retailer better meet surging demand.

“We have learned a lot in the last four years, and we will be deleveraging the investments we made in building teams and expertise in the delivery of a full fresh basket to the homes of Quebecers and Ontarians, including robust technologies and competencies and customer web interface, picking and home delivery,” President and CEO Eric La Flèche said in the call. “In the short-term, after adding a second hub store in Quebec City earlier this year, we have just added a new hub store in Sherbrooke, Quebec, bringing to nine the total of number of stores in Quebec offering our online service. In Ontario, we will be adding a third hub store in Scarborough in October to serve the East End of the GTA.”

In late April, Metro unveiled a partnership with on-demand grocery service Cornershop to provide same-day grocery delivery in Quebec and Ontario. Orders are picked and packed by a personal shopper in a Metro store and delivered in one to two hours.

“We are pleased with the results so far,” La Flèche told analysts in the third-quarter call.

Overall, Metro’s retail network encompasses about 950 food stores under the Metro, Metro Plus, Super C, Food Basics and other banners in Quebec and Ontario, as well as 650 drugstores mainly under the Jean Coutu, Brunet, Metro Pharmacy and Food Basics Pharmacy banners.