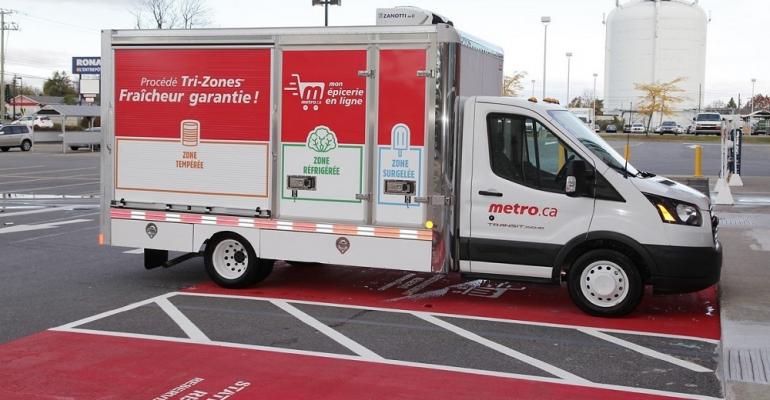 The Canadian supermarket operator said orders placed before 1 p.m. can now be picked up in-store as soon as 4 p.m. or be delivered as early as 6 p.m. Delivery carries a $10 fee, while the click-and-collect service costs $4.

For freshness, Metro uses Tri-Zones technology for online grocery orders. Items purchased online are gathered in-store by personal shoppers and brought to a dedicated Tri-Zones station for temperate, refrigerated and frozen storage. The orders remain in the Tri-Zones area until they’re picked up by customers or collected for home delivery and brought to trucks, which also are equipped with Tri-Zones storage. Dedicated Tri-Zone stations for temperate, refrigerated and frozen storage are used at Metro for online pickup, and Metro employs dedicated teams in stores to pick and assemble all orders. “At a time when consumers are looking for easy and quick solutions to eat healthy without sacrificing product quality, there has been an increasing demand for same-day delivery from our online grocery customers” Gino Plevano, vice president of digital strategy and online shopping at Metro, said in a statement. “We’ve noticed that many online orders are made during lunch hour. Being able to receive their purchases that same evening will be a great benefit for those customers, and for a great deal of families.”

Metro launched its online grocery service, including in-store pickup and home delivery, in October 2016 at two Metro Plus stores in Montreal and one in Laval. The service was expanded to the greater Quebec City area in September 2017, to the greater Montreal area in October 2017 — which gave 1.7 million households and nearly 4 million consumers access to the program — and then to Quebec’s Outaouais region in November 2017.

Currently, Metro’s online grocery program serves 60% of Quebec’s population through seven stores, and the retailer said it’s working on expanding the service to Ontario. Metro employs dedicated teams in stores to pick and assemble all orders. The company said it owns the delivery vans, but delivery is performed by an external partner.

“We’re pleased with the results so far,” commented Metro spokeswoman Geneviève Grégoire. “The demand is rising, and we continue to focus on delivering a consistent customer experience.”