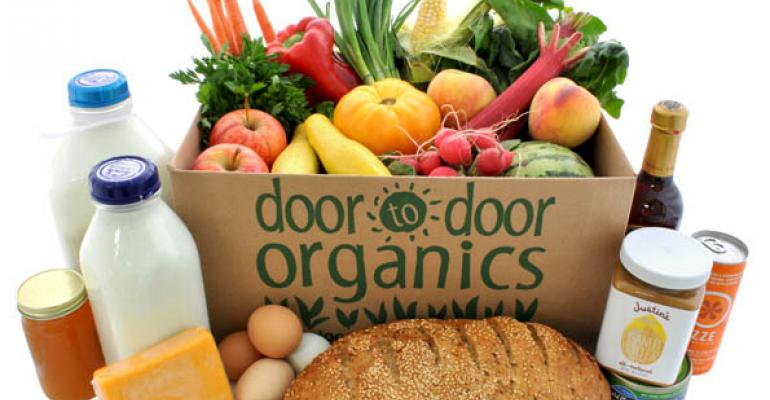 &ldquo;Rather than offering a flat list of categories as most online sites do, we think a guided experience will make it easier for consumers to shop with us.&rdquo; &mdash; Chad Arnold, president and CEO, Door to Door Organics

LOUISVILLE, Colo. — Door to Door Organics, an e-commerce company that specializes in home deliveries of natural and organic foods, is scheduled to introduce a new element to its website in mid-October — a program that will allow consumers to move smoothly from one department to another, the online equivalent of what they might do in a brick-and-mortar supermarket.

“Rather than offering a flat list of categories as most online sites do, we think a guided experience will make it easier for consumers to shop with us,” Chad Arnold, president and chief executive officer, told SN — though shoppers will also be able to move from any point to another at their own discretion, he added.

He said Door to Door Organics also plans to roll out an offering of prepared foods over the next couple of years following a successful test in one of its distribution areas; and to expand its base of five distribution centers to two additional sites next year.

According to Arnold, the move to a directed shopping experience “is a more visually energized approach to the website than most other companies offer in an e-commerce environment. And it’s the optimal way to get through a grocery store.”

The guided program will end with a re-stock page that lists basic items the customer buys regularly, such as milk or coffee, that will enable them to re-order those products with a single click.

The new approach will be personalized, based on a customer’s shopping history, he pointed out; and it will suggest products from local farmers and other vendors that might be of interest to buyers, as well as offer enhanced suggestions on how to cook with each product.

Door to Door Organics presents its product offerings in a specific context — for example, breakfast, lunch or dinner — with fruit and vegetable components leading to ingredients shoppers can buy to complete a meal.

That has led the company to test prepared meals offerings. According to Arnold, the response to the initial test in the Kansas City area that began in April has been strong enough to prompt the company to add similar offerings through its distribution center here later this year, with expansions set for its three other facilities next year.

“So rather than simply offering products that consumers can use as ingredients to make their own meals, they can buy finished meals that are delivered ready-to-eat,” Arnold said.

In developing the test, the e-grocer partnered with Conveniently Natural, a Kansas City, Mo.-based foodservice company that also sells to a variety of supermarkets while also marketing between 10 and 15 pre-made products each week through Door to Door.

Door to Door plans to partner with a foodservice company in Colorado — which it has not yet selected, Arnold noted — and to begin offering prepared foods from its Louisville facility in November, with similar partnerships at other distribution centers being added next year.

Door to Door Organics, founded in 1997 by David Gersenson, has grown from distributing out of a garage in Ottsville, Pa., to a company with five warehouses servicing customers in nine states — Colorado, Kansas, Missouri, Michigan, Illinois, Pennsylvania, New Jersey, Delaware and New York State; it will begin distributing in New York City’s Staten Island in October.

The distribution centers, which each covers about 15,000 square feet and serves customers within a 250-mile radius, are located in Louisville, a suburb of Boulder, Colo.; Kansas City, Mo.; Livonia, Mich.; Chicago; and Otttsville, Pa., about 60 miles north of Philadelphia.

Door to Door Organics contemplates opening two more distribution centers next year and additional locations in 2015, Arnold said, though he declined to pinpoint where they would be located. However, he ruled out warm-weather locales, “where there is no real winter” because the company prefers to serve a customer base that can’t find top-quality perishables in the winter months.

The SKU count at each facility is typically about 1,000 — triple what it was a couple of years ago, Arnold noted — including about 200 fresh items and 800 grocery items.

Arnold declined to specify the number of customers the company serves nor its volume, though he said annual sales are below $50 million.

That compares with about $400 million for Fresh Direct, he noted, “which is the largest e-commerce grocer and which does 10 times the volume of the rest of the e-commerce food companies.”

Door to Door focuses on buying organic, natural and local produce as much as possible. Up to 20% of products are acquired locally, Arnold said, though the percentage can be as high as 50% during the summer when it’s able to buy more local produce.

Door to Door isn’t trying to replace or eliminate traditional grocery shopping, he noted, but rather to focus “on helping people feed their families good food — more like a virtual neighborhood grocer or an online Trader Joe’s.

“What sets us apart is our ability to empower grocery shopping by integrating it with a person’s lifestyle goals and becoming their good food hub.”

“Both have been hugely impactful on the operational and supply chain side,” Arnold said, “particularly as we’ve been adding more SKUs.”

He said he sees a tremendous future for e-commerce grocery, especially with Amazon.com getting into the grocery business and putting pressure on conventional chains.

Amazon’s entry is likely to change the industry significantly, Arnold said, “because it eliminates the attitude that e-commerce is something grocery operators can ignore — and it has also prompted more capital investors to look at online groceries as a viable option.”

Though e-commerce in food currently accounts for only about 2% of the $600 billion in annual at-home food sales,” Arnold said, “if you look at other retail consumer industries, grocery is the last frontier in e-commerce, and because the penetration so far has been so low, the trajectory for growth is clearly upward.

“The big question for brick-and-mortar companies is how to adapt their models into that space vs. the folks like us who are already there. As we see it, most of them still have severe challenges to confront in e-commerce as well as simply online.”

At Door to Door Organics, all orders start with produce.

Basic orders, consisting of mixed boxes of organic fruits and vegetables, begin at $24.99 with a selection of produce geared to the needs of one or two people (including two tomatoes, two nectarines, two apples and two bananas, plus a single green pepper, one cucumber, one mango, one bunch of broccoli and one bunch of green beans.).

Each higher-priced order adds items and varieties, with a medium-sized box for two or three people priced at $34.99; a selection serving a family of four priced at $41.99; and the largest size, adequate for a party, priced at $59.99.

Though each box has a set selection of items, customers can substitute up to five items per order.

Shoppers are also able to navigate to a recipes section on the website that indicates ways to use some of the products in each box; when shoppers click on a specific recipe, a list of ingredients that can be ordered pops up, along with cooking directions.

Customers can opt to order either weekly or biweekly, with deliveries dropped off on a specific day of the week at designated spots outside the home in corrugated containers that customers can return or dispose of on their own.

Deliveries are free, with the cost of the service included in the price of the merchandise.

Door to Door relies heavily on word-of-mouth to add to its customer base, though it does some conventional print advertising.

The Lempert Report: Online Delivery Is a Battle for Speed (Video)
Sep 20, 2013
Retailers’ Online Holiday Campaigns to Start Before Halloween Is Over
Sep 20, 2013