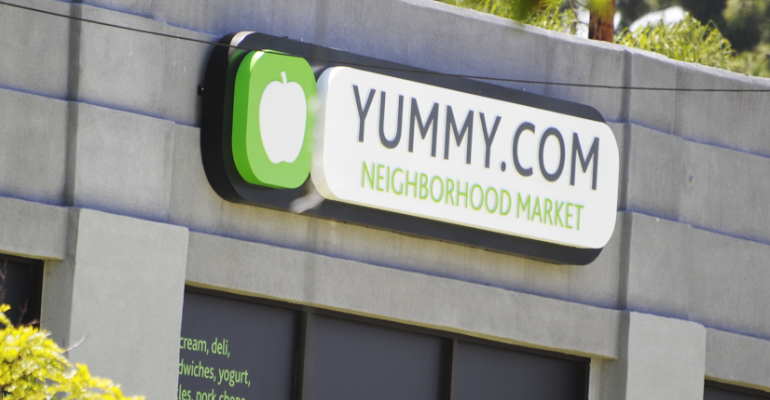 &ldquo;In the grocery category, customers might reasonably expect to fulfill an order by going to the store in 45 minutes. So our desire is to fulfill the order faster than they could do it themselves, giving them that 45 minutes of life back.&rdquo; &mdash; Barnaby Montgomery, co-founder and CEO, Yummy.com

Yummy.com, based here, operates out of four small, neighborhood grocery stores, touting delivery “in about 30 minutes” via its fleet of dedicated trucks. The service is expanding to new areas of Los Angeles just as AmazonFresh recently launched delivery of perishables — including limited same-day service — from a new warehouse in the market.

Meanwhile Instacart, based in San Francisco, where AmazonFresh is said to be planning an opening later this year, uses what its founder calls a “crowd-sourced” model of same-day delivery, through which freelance delivery drivers pick orders in local grocery stores and deliver them using their own vehicles.

“The expectation of the consumer offline is to take possession of the product as soon as they realize they need something,” he told SN last week. “As soon as it is convenient for the customer, they go to the store and they get it. That’s the on-demand fulfillment vision — to give customers the option to fulfill orders online in the same way they would do it themselves.

“In the grocery category, customers might reasonably expect to fulfill an order by going to the store in 45 minutes. So our desire is to fulfill the order faster than they could do it themselves, giving them that 45 minutes of life back.”

Montgomery — who worked in online grocery fulfillment for several years before founding Yummy.com — said the key to success is having a strong system that supports delivery on demand. Yummy.com com uses a proprietary software system that drives order efficiency, he said.

“The quality of your fulfillment has an impact upon demand,” he said. “This is a key insight that most retailers don’t see.”

By allowing customers to make small orders, and charging a relatively low delivery fee, Montgomery said Yummy.com has a natural appeal. Customers pay $3.99 for delivery, regardless of order size and can order as little as $17.50 worth of product. The average order size is $60, and the company is fulfilling about 20,000 orders per month.

“The economics of this work … because it is an efficient way to fulfill online orders, and because there is demand,” he said.

AmazonFresh, in contrast, charges $8 to $10 per order for delivery in its home market of Seattle, and in Los Angeles is coupling the service with its Amazon Prime membership for a flat fee of $299 per year. It also offers same-day delivery on minimum orders of $35 placed by 10 a.m.

Montgomery said Yummy is “not looking to get people to order unnaturally.”

“A system that incentivizes you to order $150 worth of product is getting you outside of your comfort zone,” he said, referring to traditional supermarkets and other services that offer discounted delivery for large orders. “We are very happy with a $20 order, because it is profitable for us, and because it gets that customer integrated into the system, so when they want to order $80 or $100 worth of stuff, they know where to go.

“Part of our marketing system was to allow people to order $20 worth of groceries, because that’s the way customers order in real life. They don’t order $150 worth of product, unless they go to Costco.”

Yummy.com’s stores themselves measure between 5,000 and 7,500 square feet, and carry about 3,000 SKUs — a combination of a limited assortment of conventional grocery items and a selection of meats and produce. Fifteen of the top-20 selling SKUs are produce items, Montgomery said.

He said the stores target “Millennials and Millennial-minded people” who have an interest in high-quality product.

“We carry a core selection of conventional, important grocery brands, and what we consider an interesting and appropriate product mix for our audience.”

The stores also carry some pet supplies, OTC medications, cleaning products and household necessities. They are supplied by Los Angeles-based wholesaler Unified Grocers and through other vendors for fresh and specialty product.

The stores are located in Silver Lake, Hollywood, Santa Monica and Playa Vista. Between 50% and 70% of volume is ordered online and delivered, with the rest coming from foot traffic in the two locations that accommodate customers as well as fulfill online delivery, Montgomery said.

In contrast to Yummy.com’s model leveraging its own grocery stores and an internal workforce of order pickers and drivers, San Francisco-based Instacart instead uses the stores of others and hires its picker/drivers as contract workers.

“We use personal shoppers to connect customers with individual stores, and our personal shoppers have their own cars, to provide customers who want that Amazon experience with one-hour or two-hour delivery options,” said Apoorva Mehta, a former Amazon logistics engineer who founded Instacart. “It is like a three-way marketplace between consumers, the stores and personal shoppers.”

Instacart allows customers to order product online that is sourced from local Safeway, Costco, Whole Foods and Trader Joe’s stores, at a slight markup. Drivers — about 200 are on contract — are paid based on units picked and per delivery.

Customers pay $3.99 for delivery, with a $10 minimum order. About 90% of Instacart’s orders are for same-day delivery.

“One of the things we found out is that people don’t like to see all the extra fees at the end of their order, so we’ve added some additional cost into each item,” explained Mehta.

Instacart’s user interface allows shoppers to compare prices online, and to shop multiple stores within a single delivery order. Many customers, Mehta explained, like to pick up frozen foods from Trader Joe’s, for example, within the same order as organic produce from Whole Foods. 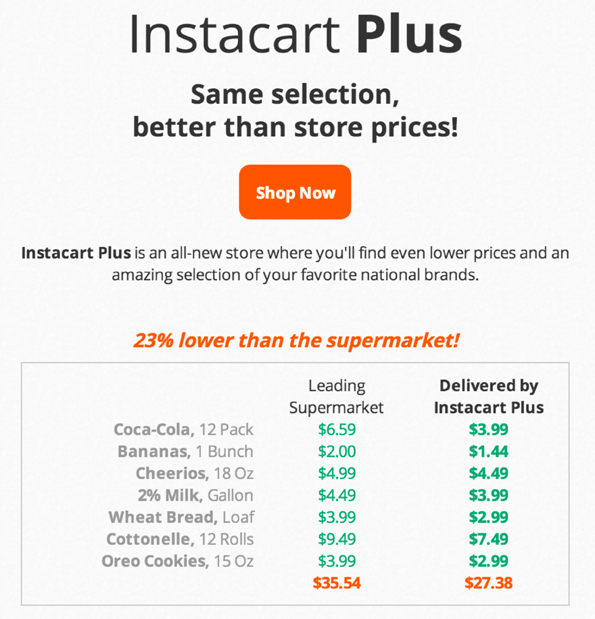 “Now you can shop from all those stores with a couple of clicks, and we think a lot of customers find that a huge value proposition,” he said.

Customers are often very loyal to certain brands they can only find at each of the stores where Instacart shops, Mehta noted. About 40% of the orders through Instacart are picked from Safeway stores, he said.

He declined to provide data about sales volumes at Instacart.

A key factor driving Instacart’s growth since it was launched seven months ago has been the ubiquity of smartphones, Mehta explained. They enable instant communication among the company, its customers and the personal shoppers, who are equipped with electronic store maps to guide them efficiently though their store picks and deliveries.

“Practically speaking, everyone in the age group we are targeting has a smartphone,” Mehta said. “And all of the personal shoppers we use have smartphones in their cars, so they basically have become the fulfillment infrastructure that we need instead of having the fleet of trucks that companies like AmazonFresh and FreshDirect have.”

Turnover has been surprising low among the personal shoppers, who are carefully screened and trained in picking product, Mehta said.

“They have found they can make more money than they were before, and they provide great customer service,” he said.