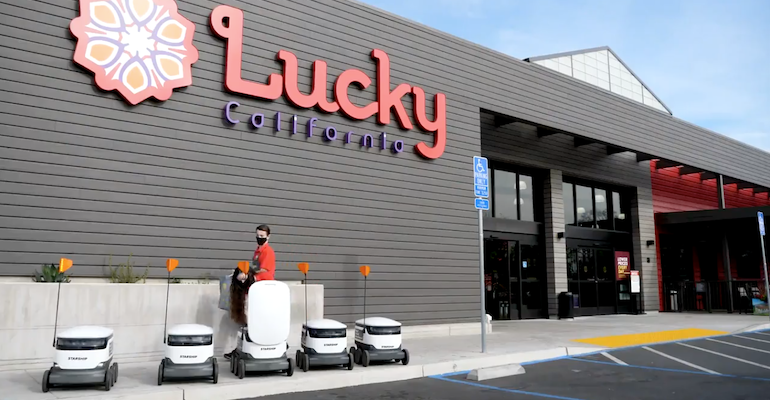 Save Mart
Via the Lucky California store in Pleasanton, Calif., over 1,500 households will have access to the Starship robotic delivery service, The Save Mart Cos. said.
News>Online Retail

The Save Mart Cos. has kicked off robot-powered online grocery delivery at its flagship Lucky California store in Pleasanton using autonomous vehicles from Starship Technologies.

Save Mart said Wednesday that the program makes the Pleasanton Lucky California the first San Francisco Bay Area supermarket to use the compact delivery robots from San Francisco-based Starship. The launch also marks an expansion of Save Mart’s partnership with Starship, which in September 2020 began e-grocery delivery with its robotic vehicles at the flagship Save Mart store in Modesto, Calif.

With the technology’s premiere at Lucky California Pleasanton, more than 1,500 households will have access to the robotic delivery service, which is expected to grow rapidly in the upcoming months, according to Save Mart. The grocer said that since the autonomous vehicles’ launch at the Modesto store — the first U.S. supermarket to employ the Starship solution — the service area has expanded to more than 55,000 households.

“Since the debut of our contactless delivery service at the Save Mart flagship store, feedback from the Modesto community has been incredibly positive,” Barbara Walker, senior vice president and chief marketing officer at The Save Mart Cos., said in a statement. “We are thrilled to expand this service to Lucky California in Pleasanton and offer a safe and efficient grocery delivery solution, along with some joyful entertainment, especially as the service area progressively expands over time. Bay Area shoppers continue to discover our diverse assortment of products and fresh, quality groceries and, during these challenging times, Lucky California is working hard to keep prices low and shelves stocked.”

Related: Save Mart kicks off pilot of shelf-scanning robots 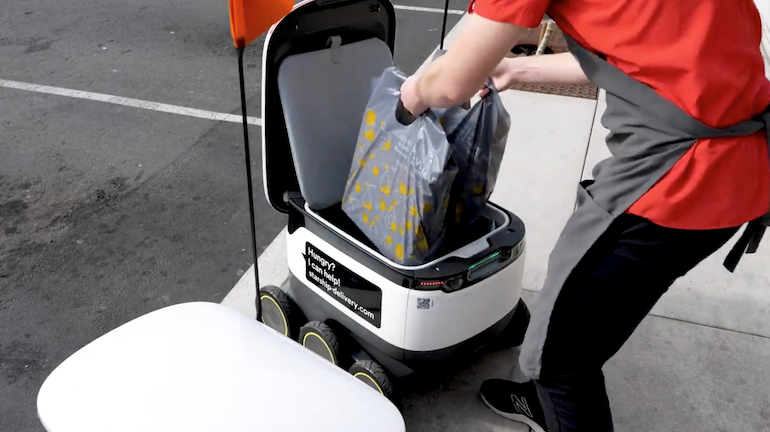 Starship's compact autonomous vehicles use machine learning, artificial intelligence and sensor technology to navigate and can tote up to 20 pounds of groceries.

To use the on-demand service (click here for video), customers download the free Starship Food Delivery app (available in iOS and Android version), shop for groceries among the thousands of Lucky California items available. After adding products to their virtual cart, they drop a pin to designate where they want their items delivered. Lucky California personal shoppers field the online order, pick and bag the products, and place them a Starship robot, which has its interior and exterior sanitized before each delivery. Customers can track the robot’s journey via an interactive map, and when the vehicle arrives at their home, they receive an alert to go outside, unlock the robot’s lid using their mobile device and retrieve their order. 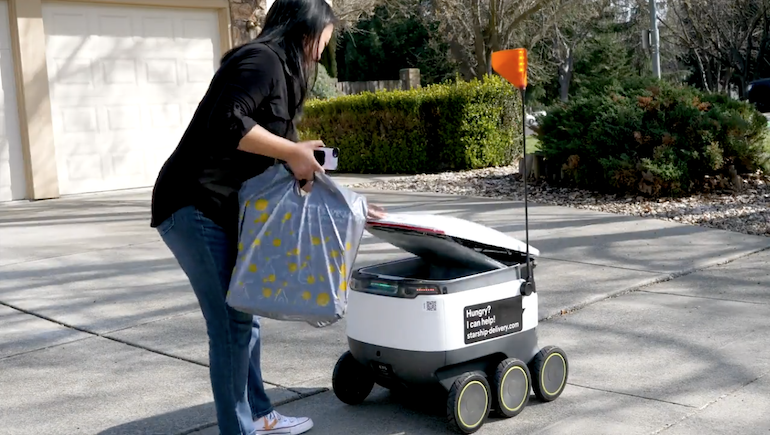 Upon the robot's arrival, customers get an alert to go outside, unlock the vehicle’s lid using their mobile device and collect their order.

Save Mart said the delivery typically takes minutes, depending on items ordered and the distance that must be traveled. Each of the knee-high, six-wheeled robotic vehicles can carry up to 20 pounds of groceries, or about three full shopping bags. According to Starship, the autonomous vehicles move at pedestrian speed and use machine learning, artificial intelligence and sensor technology to travel on sidewalks and navigate around obstacles. The robots can cross streets, climb curbs and operate at night, as well as in rain and snow. Starship reported that its zero-emission robots make more than 100,000 road crossings daily and have completed more than 2.5 million commercial deliveries and traveled 3 million miles globally.

“We are very pleased to bring the benefits of autonomous delivery to Pleasanton, in partnership with Lucky California,” stated Ryan Tuohy, senior vice president of sales and business development at Starship Technologies. “Since launching our service in Modesto in 2020, we’ve been excited to see the extremely positive reaction to the robots and how they were embraced as part of the local community. We think the residents of Pleasanton will appreciate the convenience and positive environmental impact of autonomous delivery, and we fully expect the service area to quickly expand to more households.”

Save Mart added that the new service follows the May 2021 reopening of the Pleasanton Lucky California store, which was revamped to better meet the shopping needs of the community. The retailer said the store serves as the banner’s flagship location as well as an innovation lab.

Overall, Modesto-based Save Mart Cos. operates 206 stores in California and Nevada under the banners Save Mart, Lucky and Lucky California (supermarkets); FoodMaxx (warehouse grocery stores); and MaxxValue (discount grocery).