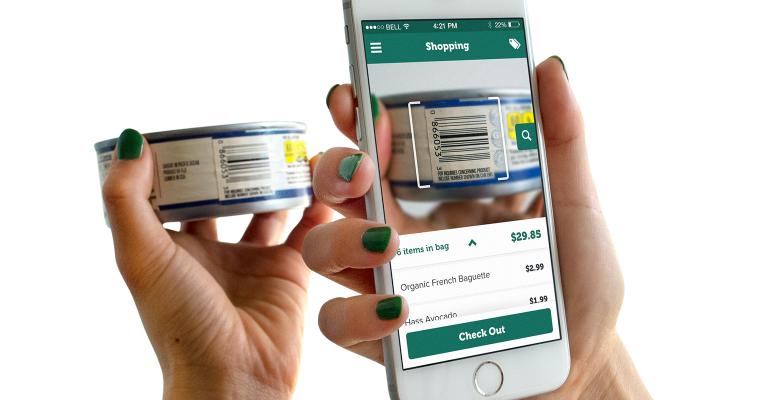 Alfred Holzheu, co-owner of three-store California Fresh Market, has been waiting for a decent self-checkout service since he was a college student in the late 1970s.

A little over a year ago, Holzheu finally found a solution in the form of an app from developer FutureProof Retail.

“Obviously it’s a brand new concept. It’s radically different from anything anybody’s done in the grocery business before,” said Holzheu.

California Fresh Market had been somewhat quietly testing the app in two existing stores but earlier this month announced the self-checkout feature would be available in its newest location in San Luis Obispo.

Customers who use the app scan items with their smartphones as they shop. When they are ready to check out, shoppers head to a check stand and scan a checkout code, then pay with Apple Pay or a credit card.

Holzheu said the main goal of the app was customer convenience.

“It’s noticeable when other shoppers are checking out with it. You’re standing in line and you’re kind of waiting in line and you see someone walk by, scan the code and breeze on out of there,” said Will Hogben, co-found of FutureProof Retail.

Fellow co-founder Di Di Chan said they tested the app on her grandmother to make sure it was easy to use.

San Luis Obispo is a college town, and Holzheu said he hoped the younger clientele would be more likely to use the app. He also added Wi-Fi access throughout the store to keep customers connected.

Still, the app has been slow to catch on over the year of testing. Holzheu said only five or six customers per store per day opt for self-checkout.

“A while back we did a big push, and unfortunately we ran into some of the bugs, which made a lot of people who were using it, or had started to use it, it was just like, eh, it’s too much trouble,” said Holzheu.

Now that the bugs have been worked out, app users seem pleased.

“The people who do use it rave about it. They think it’s just great,” said Holzheu.

By January, California Fresh Market hopes to add the ability to order directly from the deli or other areas of the store from the app, which should increase overall usage.

Hogben and Chan noted the app has benefits for retailers. When customers receive their receipts, there is an option to leave instant feedback on their shopping experience, allowing retailers to learn in real time if a certain item was out of stock, for example. In addition, retailers can personalize advertising and offers to app users in the same way online retailers do.

“I think there is a lot of evidence that this is the direction that shopping is going to go. And I see it, if we’re zooming out a little bit, as being a broader step in how people interact with businesses. And that step being a shifting to interacting with businesses through their phones,” said Hogben.

While that may be the case, not all customers are quite there yet.

“The interesting thing is people still want to have the human touch,” said Holzheu. “They like talking to the checkers. Like at a coffee bar you develop a relationship with a barista who knows what you want every day. And I think it’s the same thing with checking and with the butcher and all that sort of thing.”

As previously reported by SN, Albertsons has removed self-checkout stations from many of its stores for that reason.