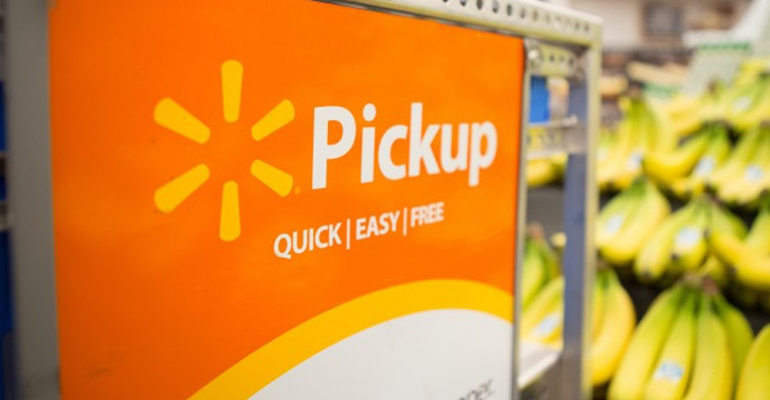 The share of U.S. consumers who purchased groceries online in the past year has jumped from less than a quarter to well over a third, with Amazon and Walmart by far the top purchasing venues, according to Coresight Research.

In its U.S. Online Grocery Survey 2019, released Tuesday, Coresight said 36.8% of 1,888 internet-using adults polled bought groceries online in the previous 12 months, up from 23.1% in the 2018 study. Based on U.S. Census Bureau data, the 2019 percentage equates to approximately 93 million online grocery purchasers, a gain of nearly 35 million from last year.

“This year, some 39.5% said they expect to shop online for groceries in the next 12 months, representing only a minor uplift from actual shopper numbers (past 12 months),” Coresight founder and CEO Deborah Weinswig wrote in the report. “The potential to grow the online market lies in the 21% who say they don’t know if they will buy groceries online in the next year.” 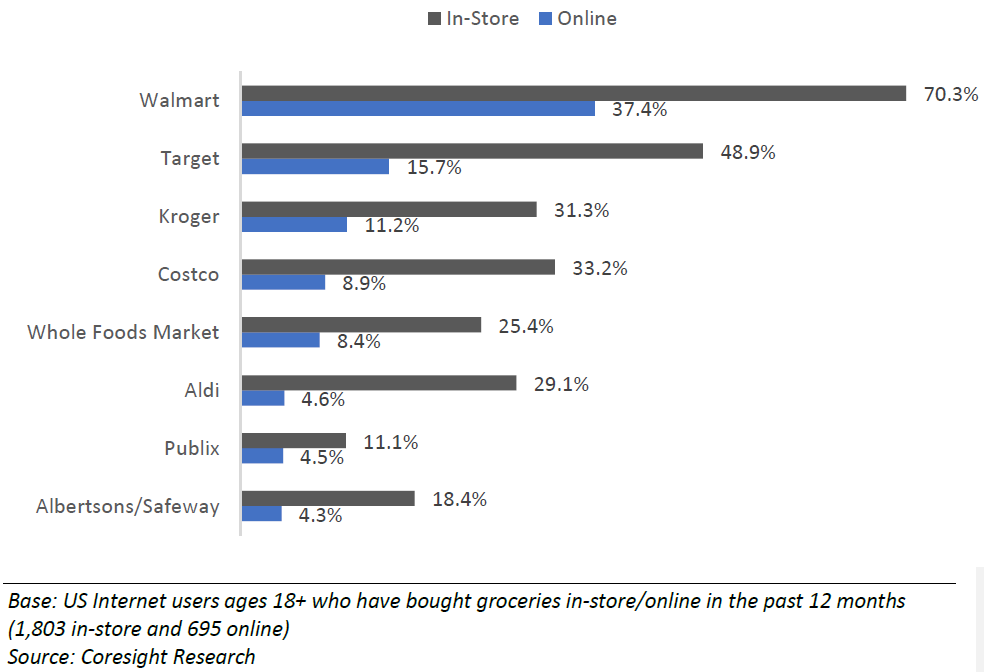 Online grocery spending growth, however, hasn’t matched the sharp expansion in the shopper base, Coresight noted. Of U.S. food and beverage retail sales in 2019, the research form forecasts just 2.7% to be online, up slightly from 2.2% in 2018.

“The online grocery market has a sizable number of shoppers, but they generally buy online infrequently,” Weinswig observed.

The bottom line: 72.4% of respondents purchased “a little” and only 11.6% bought “a lot” of their groceries online, compared with 71.7% and 14.3%, respectively, in the 2018 survey, Weinswig reported. The study includes food and nonfood items typically purchased from a grocery store.

“The proportion of online shoppers saying they do ‘most’ or ‘all or almost all’ of their grocery shopping online declined year over year in 2019,” she explained. “The biggest year-over-year uplift was in the proportion doing a small amount of their shopping online, suggesting that the market is primarily adding tentative or occasional shoppers.”

On the retail side, Amazon remains the dominant online grocery purchasing destination, but Walmart has narrowed the gap, Coresight’s study showed.

Of those surveyed, 62.5% said they bought groceries online in the past 12 months from Amazon, compared with 59.5% a year ago. Meanwhile, 37.4% reported purchasing groceries online from Walmart during that time span, up from 25.5% in the 2018 study. 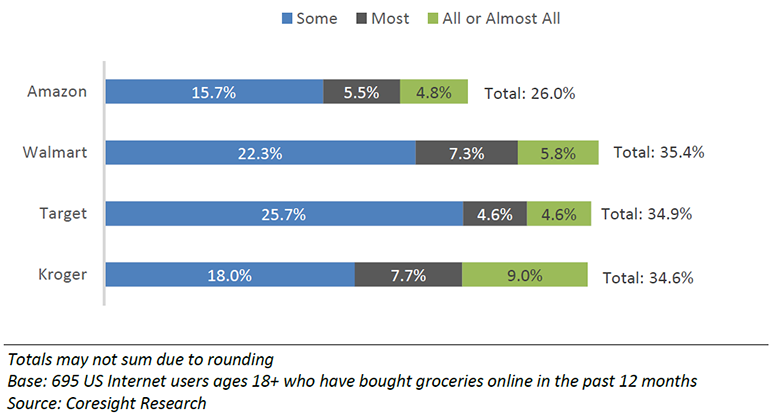 Based on census data, Walmart and Kroger have more than doubled their online grocery shopper numbers over the past 12 months, adding about 20 million and 6 million online customers, respectively, Coresight said in the report. Target has more than tripled its online grocery shopper count, adding an estimated 10 million customers during the past year.

“We also asked respondents where they bought groceries in-store,” Weinswig wrote. “Of the major retailers, Walmart has the lowest ratio of in-store to online (very roughly 2:1), suggesting that it is converting shoppers to grocery e-commerce faster than its rivals are. Target and Kroger each have an in-store/online ratio of very roughly 3:1.”

Although Amazon is well-ahead of other retailers in drawing online grocery shoppers, the e-tail giant “underindexes” on regular, full-basket grocery purchases, Coresight found. Twenty-six percent of shoppers surveyed said they bought “some,” “most” or “all or almost all” of their groceries online from Amazon, compared with 35.4% for Walmart, 34.9% for Target and 34.6% for Kroger.

“Amazon shoppers appear to be occasional or small-basket online grocery shoppers,” said Weinswig. “Amazon may underindex in grocery because the most popular Amazon service is its regular website, used by around 53% of Amazon’s grocery shoppers. Amazon’s regular site is limited to ambient grocery products that can be sent by mail, which makes it all but impossible to shop for a basket of conventional groceries.

“Apparently offsetting this was a jump in respondents saying they used AmazonFresh, Amazon’s full-service grocery service, from 12% of Amazon grocery shoppers in 2018 to 25% in 2019,” she added.