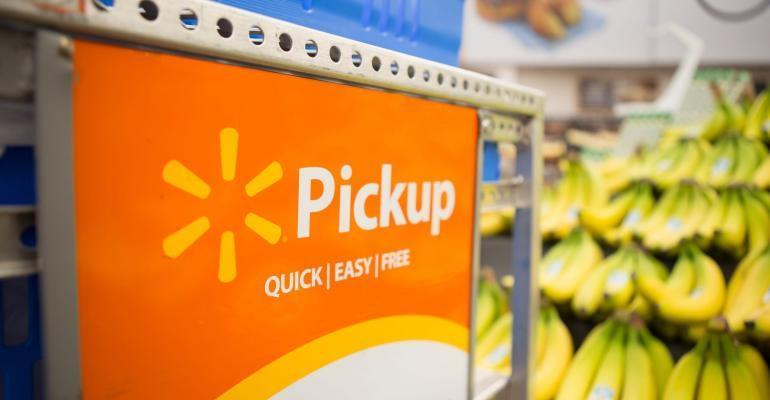 Walmart
Walmart has garnered a 30% share of online grocery retail transactions, compared with 27.1% for Amazon, according to the TABS Analytics 8th Annual Food and Beverage Consumables Study.
News>Online Retail

Shelton, Conn.-based TABS said Monday that Walmart garnered a 30% share of online food and beverage retail transactions, down slightly from 30.4% in 2019 but pushing the retail giant ahead of Amazon for the first time in the study. Amazon saw its online grocery transactions drop more than five points to 27.1% from 32.6%, according to the study.

Also seeing declines in online food and beverage retail transactions from last year’s study were traditional grocery stores, to 15.3% from 15.7%, and Target, to 11.2% from 13.4%.

For the study, TABS surveyed 1,000 U.S. adults in early August about their food and beverage purchasing habits, including online.

“Walmart has vanquished Amazon as No. 1 in [online] grocery. We didn’t do nonfood, but because they [Walmart] have always had such an inherent strength in personal care and HBC, I would imagine that applies to the entire CPG universe,” Dr. Kurt Jetta, founder and executive chairman of TABS, said in a webinar on the study. “What was interesting was that Amazon lost so much transaction share. Target dipped a bit as well.” He added that the study didn't measure transaction size.

Meanwhile, e-commerce grocery players like FreshDirect, NetGrocer, Peapod and Instacart, among others, achieved significant gains in online transaction share, Jetta noted. Grouped as “other” in the TABS study, these operators had a 16.7% share of online grocery transactions, up from 7.9% a year ago. TABS also estimated this group’s percentage growth in online grocery transactions at 140%, compared with gains of 14% for Walmart and 12% for conventional supermarkets and 4% decreases for Amazon and Target.

The e-grocer group’s transaction growth was “eye-popping,” according to Jetta. “A projected 140% increase in transactions? I said no way. So we went out to validate that and looked at what’s FreshDirect saying, what’s Peapod saying, what’s NetGrocer saying and what’s Instacart saying about their growth. And sure enough, they were reporting some big-time numbers.” 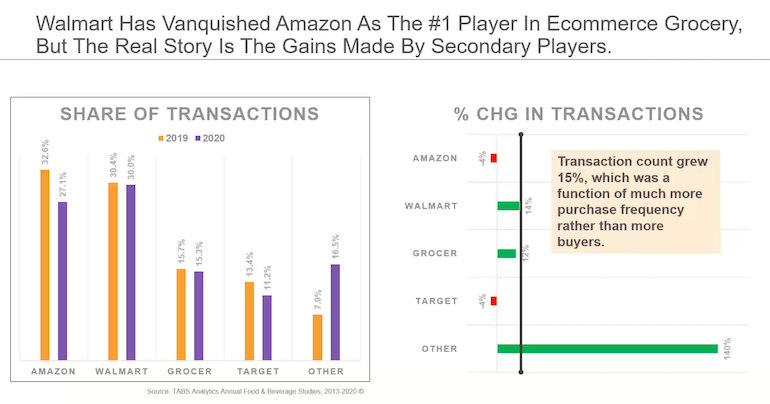 A factor behind Amazon’s decreased transaction share and growth, according to TABS’ findings, could be consumables penetration among online shoppers. In the 2020 study, 30% of respondents said they purchased groceries at Amazon, down from 35% in the 2019 research. Walmart also had 30% penetration, but that marked growth from 28% last year. Target held roughly steady at 14% penetration (versus 15% a year ago), while traditional supermarkets saw their online grocery penetration rise to 14% from 10%.

“Grocers went from 10% to 14%  [in penetration], and that was pretty healthy growth in their [online] buyer base. Amazon actually went down, and the fact that they went down leads me to think, was there a supply chain issue?” Jetta said.

Amazon disagreed with the TABS study findings. "We've seen online grocery orders more than double in August year over year and online grocery sales triple year over year, based on Q2 earnings results," an Amazon spokesperson said in an email, "and it continues to be one of the fastest-growing businesses at Amazon."

TABS said e-grocery players saw online penetration jump to 20% this year from 7% in last year’s study. “Some of these guys were just struggling, and all of a sudden they got this bolt of energy and more than doubled their penetration,” Jetta said.

“Everybody did well, but you see declines among [traditional] grocers and ‘other’ [e-commerce players], and that would be expected as you’re bringing in new and marginal buyers,” Jetta explained. “Grocers have this inherent strength of purchase frequency. People are already used to going there all the time. They go to their grocer 40 times a year.” 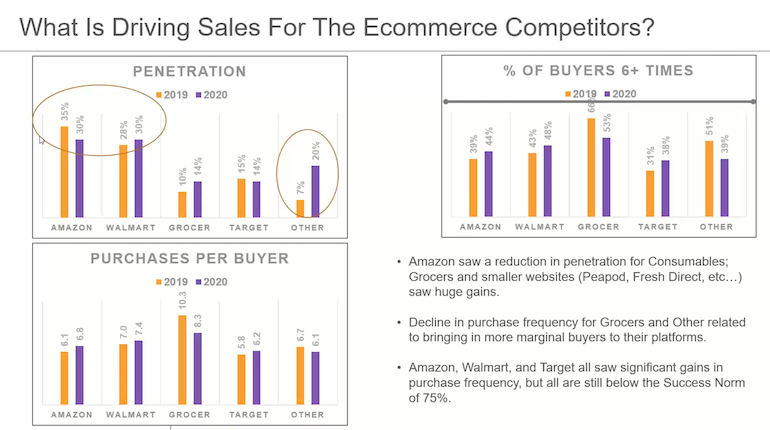 “So less than half of the people [surveyed] report buying [online] from either Walmart or Amazon at least six times a year,” Jetta said in the webinar. “Albertsons is probably at 21-22 [trips], Kroger is at 23-24 and Stop & Shop is around that rate. They [conventional grocers] are all in that 20-30 range, probably an average of 24-25. So there’s still this big repeat issue that food e-commerce is still dealing with.

“The thing about e-commerce is that it’s relatively small — about 7% [market share] — and it has all of these inherent demand issues and some really profound cost-of-service issues,” he added. “But the big thing is that it’s incremental.”

Overall, online grocery transactions climbed 15% year-over-year. However, penetration among consumers was flat, with a notable drop in regular buyers, indicating that the base of e-commerce grocery customers didn’t expand, according to TABS.

Jetta noted that the threshold for success in brick-and-mortar is 75%. “That means if I’m below 75%, I get on this replenishment wheel where I’m losing people — regular buyers — faster than I can bring them in. When I’m up at 75%, I don’t have to work as hard to bring people in because I have such a sticky shopping experience. Now, this big drop isn’t cause for alarm because there are big gains among individual [retail] banners. But the fact that [stated loyalty] didn’t go up a lot suggests that a lot of people didn’t return [as online grocery buyers] from last year.” 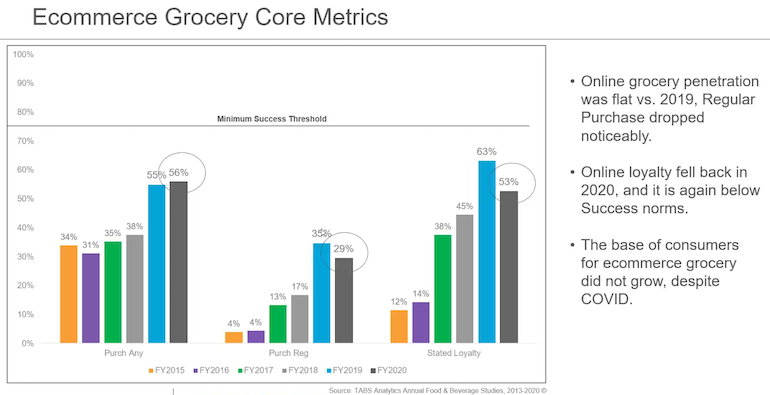 TABS pointed out that e-commerce is complementing — not cannibalizing — brick-and-mortar grocery retailers, which are still reporting strong sales, indicating that they’re not having business siphoned away from online channels. Most brick-and-mortar channels remained consistent year-over-year. Value grocery chains like Aldi saw a significant rise in regular shoppers, while dollar stores and Costco Wholesale experienced declines.

“Given the focus on online shopping as the nation navigated stay-at-home orders and quarantines during the COVID-19 crisis, we expected online grocery to see a massive upswing this year. But, in reality, that was not the case,” Jetta said in a statement. “Since e-commerce grocery has not succeeded in expanding the pool of buyers at a time when demand is expected to be greatest, it has become even clearer that this channel will never have the scale necessary to be profitable with the current business model. New, creative approaches are needed to address pricing and streamline the supply chain.”