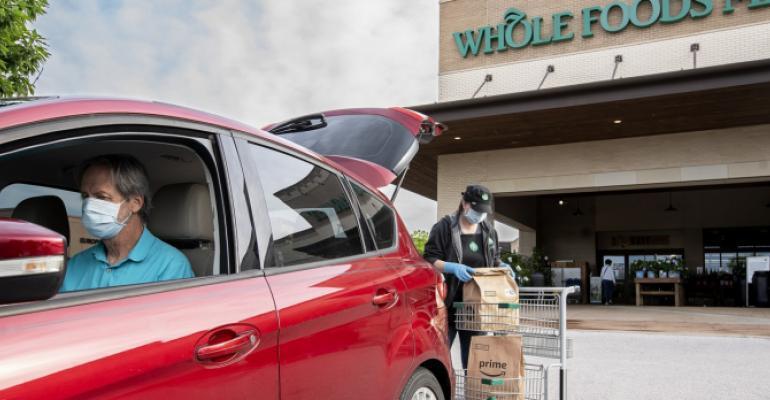 Whole Foods Market
In a poll of more than 2,300 U.S. consumers, 76% reported grocery shopping online for ease and convenience versus 56% saying they do so to avoid the risk of COVID-19, ACI Worldwide said.
News>Online Retail

In a poll of more than 2,300 U.S. consumers, 76% reported grocery shopping online for ease and convenience versus 56% saying they do so to avoid the risk of COVID-19, according to ACI, which conducted the “What Consumers Expect From Their Grocery Shopping Experiences” study with its PYMNTS.com media arm. Thirty-four percent of shoppers said it’s faster to buy groceries online, and 53% indicated they had a good online experience and want to continue shopping that way.

Related: Increased use of online grocery shopping ‘here to stay’

Overall, 34% of respondents said they shop for at least some of their groceries online, yet that percentage jumps to 57% for Millennial shoppers, ACI said. Twenty-three percent use home delivery, with 8% indicating that it’s their preferred channel, while 20% use curbside pickup, with 7% preferring that channel. Similarly, 14% of shoppers reported they buy groceries online for delivery more since the start of the pandemic, with the same percentage doing so via curbside pickup. 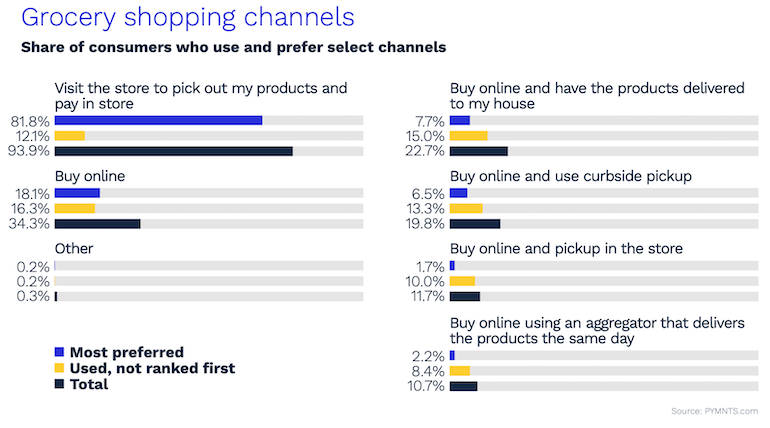 At the same time, grocery shoppers are not abandoning brick-and-mortar. ACI found that 94% of consumers surveyed shop in physical stores at least some of the time. Fifteen percent said they have stepped up in-store grocery shopping in stores since the onset of the pandemic, and 21% have shopped in stores less since the COVID crisis began.

ACI’s research revealed that online grocery shoppers are more likely to use mobile devices (55%) than laptop or desktop computers (38%) to place their orders. The broad use of mobile devices also corresponds to a wider use of payment methods. Thirty-one percent of online grocery shoppers said they use PayPal, while 22% use other mobile wallets like Apple Pay or Google Pay.

“While the pandemic drove an undeniable shift to digital shopping, it’s clear that consumers are more likely to continue to use these methods due to their ease and convenience than for the safety reasons that initially led them there,” according to Debbie Guerra, executive vice president at ACI Worldwide. “These consumers have discovered the benefits of digital shopping and like what they’ve found.”

“The survey suggests a potential lack of knowledge around contactless terminals that may be leading to low adoption of contactless payments,” Guerra explained. “This presents a significant opportunity for grocery stores to educate consumers on in-store contactless payment options.”

In other findings, ACI’s poll of 2,342 U.S. consumers, conducted from June 9 to June 13, showed that 31% of shoppers shifted to digital channels to shop for retail products online versus 17% who have gone online to buy groceries. One-stop shopping weighs heavily for many consumers, who favor grocery stores that also sell nonfood items such as cosmetics and clothing. Fifty-six percent of respondents said they would consider switching to grocery stores that offered additional products and services.

“While the shift to digital shopping has been a boon for merchants, the challenge is that a competitor is only one click away,” Guerra added. “That’s where loyalty programs can make a difference. Offering consumers financial incentives to stick with their preferred stores can go a long way for merchants.”

In terms of retailers, 39.1% of consumers polled in June reported shopping at a large national supermarket chain for their groceries, up from 27.8% in ACI’s October 2020 survey.