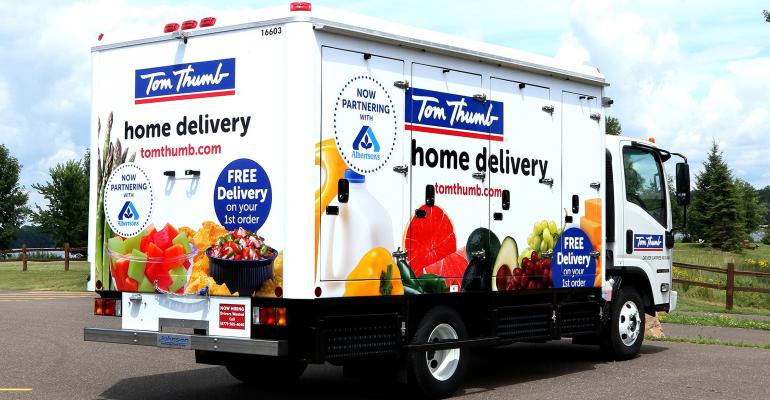 <p>Albertsons is partnering with Tom Thumb for home delivery in the Dallas-Fort Worth area.</p>
News>Online Retail

These major retailers recently announced plans to add or augment their e-grocery offerings.

Tom Thumb and Albertsons shoppers in the Dallas-Fort Worth area will be able to order grocery delivery through a new program announced Wednesday. The retailer is offering $10 off and free delivery for the first order. Available through www.tomthumb.com or a Tom Thumb delivery app, the service features one-hour delivery windows.

The retailer highlighted a new fleet of delivery trucks, which have multiple temperature zones for refrigerated and frozen items.

During Supervalu’s earnings call Wednesday, CEO Mark Gross told investors the company has been testing three e-commerce providers at its retail banners in separate markets. Home delivery and click-and-collect options will be available by the end of the year in 25% of retail stores, which is about 50 stores.

Gross noted Supervalu already has 660,000 digital accounts from its retail banners, which include Cub Foods, Farm Fresh, Hornbacher’s, Shop ‘n Save and Shoppers.

Charlotte customers who sign up for an annual membership with Shipt prior to the launch on Oct. 26 will receive $25 off their first order. Shipt membership costs $99 per year for unlimited deliveries; delivery is free on all orders over $35.

Harris Teeter already offers delivery in Charlotte through its ExpressLane program. In a press release, the retailer said Shipt would give its customers more choices.

It’s possible Harris Teeter sees a different type of customer using Shipt from those that use ExpressLane. In an earnings call in August, Ahold Delhaize noted its customers use Instacart for quick fill-in trips and tend to shop Peapod for larger orders.