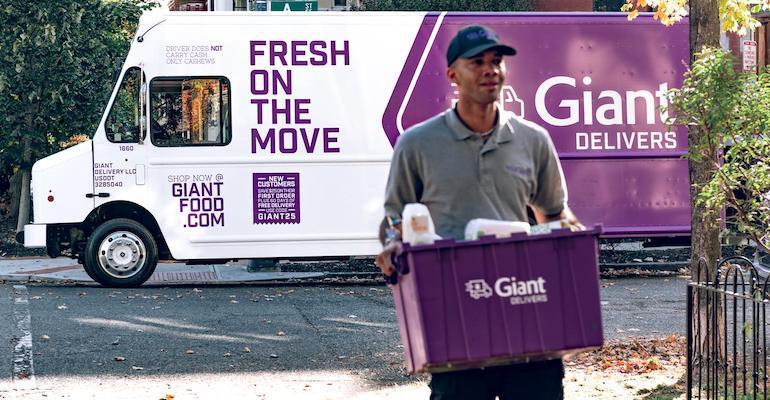 Giant Food
In March, delivery sales climbed 9.3% from February and were up 20.7% versus March 2021, Brick Meets Click reported.
News>Online Retail

The U.S. online grocery market totaled $8.7 billion in March, the same as in February but down 6.5% from a record high of $9.3 billion a year ago, strategic advisory firm Brick Meets Click reported.

Month-to-month, ship-to-home online grocery sales held firm at $1.4 billion for March, the same as in February. Still, that channel continues to shrink, as sales on a year-over-year basis fell by a third in March after a 22.2% drop in February. 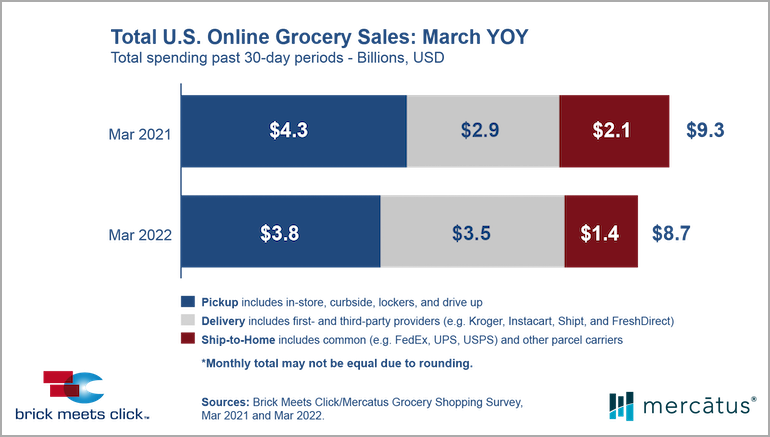 Online grocery sales represented 13.1% of total U.S. grocery sales in the first quarter of 2022, down from 13.7% a year earlier. However, Brick Meets Click pointed out, combined delivery and pickup wallet share — excluding ship-to-home, a service not offered by most conventional grocers — has gained around 40 basis points, accounting for 10.9% of total grocery spending during the first quarter.

The strong delivery sales growth in March reflects year-to-year increases of 13% in the number of orders placed by monthly active users (MAUs) and 7% in average order value (AOV), according to Brick Meets Click’s analysis. Meanwhile, click-and-collect saw order frequency fall by 8% and AOV by 4% from a year ago. The drop-off was much larger for the ship-to-home segment, which had a 13% reduction in the number of orders placed by MAUs and a 23% plunge in AOV.

“A key takeaway from March’s report is that online grocery sales have retained much of the gains from a year ago, proving the resilience of grocery eCommerce,” according to Sylvain Perrier, president and CEO of Toronto-based Mercatus. “Even so, conventional grocers need to develop and strengthen their first-party web and mobile channels, leverage third-party solutions to fill in the gaps and excel at executing the services they offer.”