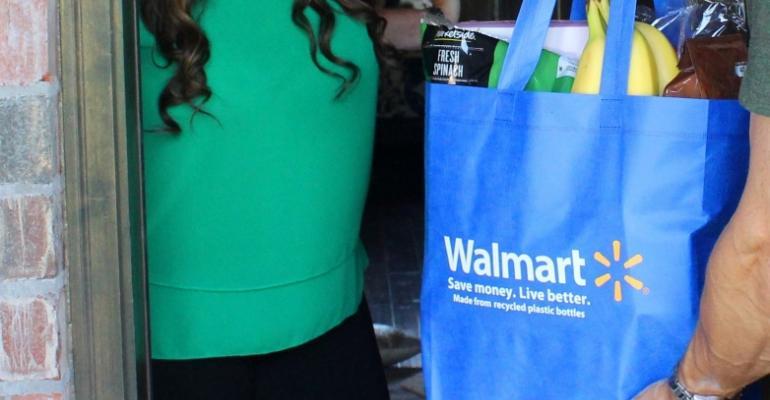 Walmart
Over 35% of consumers polled by Chicory cited Walmart as the retailer they use most often to buy groceries online, compared with about 23% naming Amazon.
News>Online Retail

Of more than 1,000 U.S. adults polled in January, over 35% named Walmart as the retailer they use most often to buy groceries online, the third annual Chicory Online Grocery Usership Survey found. E-tail giant Amazon finished a distant second, cited by about 23% of respondents as their most-used online grocer. Third-party online grocery provider Instacart was the only other company to reach double digits, named by 10% of survey participants. 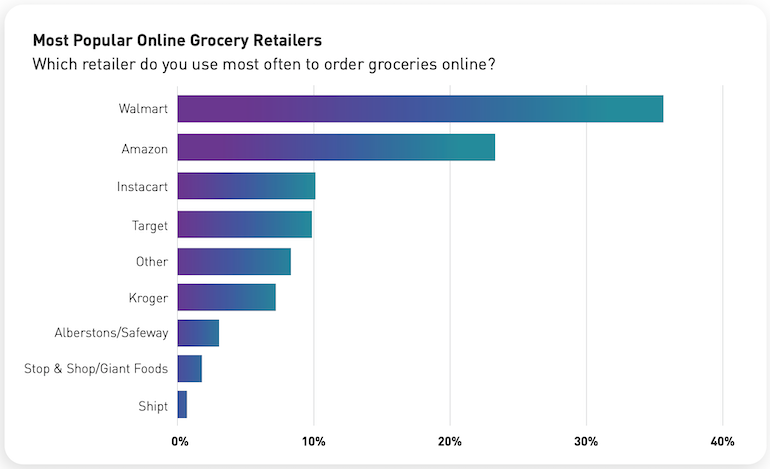 “Walmart and Amazon come in as the top online grocery retailers for the third year in a row,” New York-based Chicory stated in the study. “Instacart, notably, held its position at No. 3. Considering Instacart has no brick-and-mortar locations, and is solely focused on grocery delivery, its place at No. 3 is impressive and reflective of the overall rise in popularity of digital grocery solutions.”

By age, Target draws a significant percentage of 18- to 44-year-olds as their online grocer of choice, but Walmart and Amazon respectively led across all generational groups as the most-chosen e-grocers. Amazon was the top choice for those ages 60 and older, while Walmart had the most traction among 45- to 60-year-olds. Conventional supermarket chain Kroger also had its largest share of online grocery users in that age group. Instacart, meanwhile, had its biggest online grocery usership in the age 18-29 segment.

“Digital grocery adoption has steadily increased over the past two years, with the largest jump in adoption occurring between January 2020 and April 2020, of course,” Chicory observed. “January 2021’s survey respondents purchased groceries online the most over a 60-day period, at 70.27%.”

Fifty-two percent of January 2022 respondents placed online grocery orders at least once weekly, including 10% doing so more than one time per week. Roughly 33% order groceries online once a month, and about 14% buy groceries online for special occasions or holidays.

“For 33% of shoppers, it’s pantry staples and supplies that are driving the majority of their spend. This suggests that shoppers are relying on online ordering for essentials, not just spur-of-the-moment wants, like snacks. These items also hold up during transport well, making them a no-brainer to add to cart,” Chicory explained in its report. “Surprising to some, dairy or meat comes in as the second-most-popular item to make up an online shopper’s cart. Again, this may be a nod to the fact that shoppers are using digital solutions to quickly get must-have items, like milk, cheese and eggs. As online grocery shopping adoption increases, we expect shoppers’ comfortability ordering perishable items, like dairy or produce, to grow.” 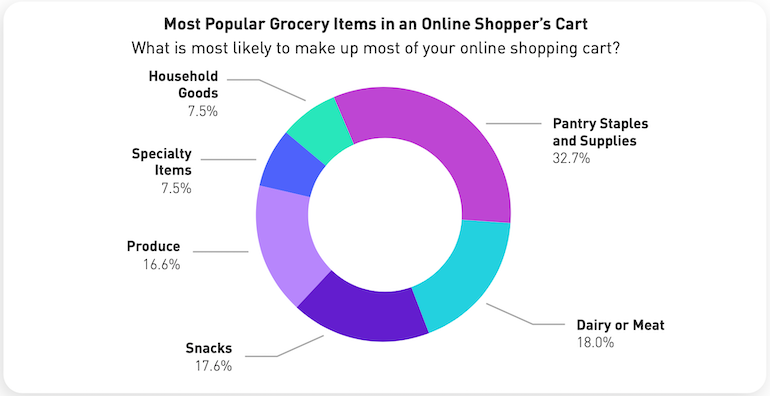 The fact that just 10% of shoppers named health/safety concerns indicates that elevated online grocery use “is not merely a byproduct of the pandemic,” Chicory added.

“The results of this latest survey reaffirm that digital grocery is here to stay, as consumers continue to prioritize convenience and simplicity,” Chicory CEO and co-Founder Yuni Sameshima said in a statement. “Brands looking to reach today’s grocery shopper in high-intent moments need to be investing in solutions that will extend the on-site experience to off-platform locations like digital recipes.”