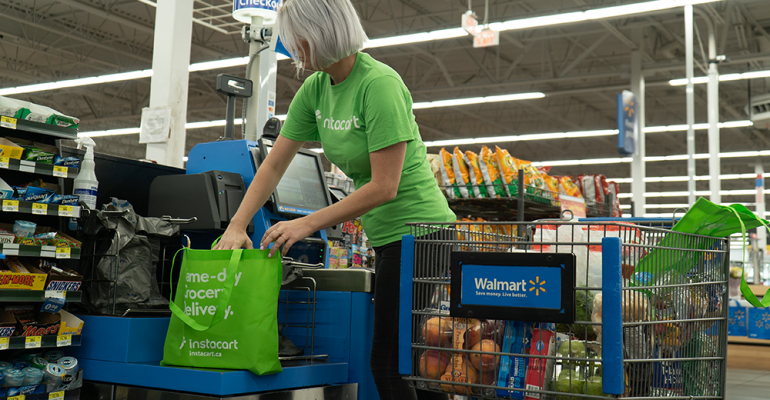 Walmart Canada teams up with Instacart

The pilot marks the first time that Walmart Canada and Instacart have collaborated, the companies said Thursday.

In addition, the launch expands Walmart’s relationship with Instacart. The Bentonville, Ark.-based retail giant previously only worked with Instacart through its Sam’s Club division, which introduced the service in late February.

“In the United States, we work with Sam’s Club. So this will be our first Walmart banner stores,” said Nilam Ganenthiran, chief business officer at San Francisco-based Instacart.

Under the new partnership, Instacart delivery for 12 Walmart Canada stores in the Toronto area is scheduled to begin on Sept. 13, followed by a pilot of the service launching at five stores in Winnipeg on Sept. 27. Customers will be able to have their grocery orders delivered in as soon as one hour.

For Walmart Canada, the Instacart pilots represent the first time that Toronto customers will have same-day grocery delivery and the first time Winnipeg customers will have access to grocery home delivery. Walmart Canada already offered next-day grocery delivery and Walmart Grocery Pickup in much of greater Toronto, and earlier this year the retailer launched the Walmart pickup service at all Winnipeg stores.

“Canadian families are busy, and saving time is as important as saving money,” Walmart Canada President and CEO Lee Tappenden said in a statement. “By teaming up with Instacart, we’re providing our customers with express home delivery of fresh, quality groceries at Walmart’s low prices every day in as little as an hour.”

To use the Instacart service, Walmart Canada customers download the Instacart app or go online to Instacart.ca to find their local Walmart Supercenter and place their order. Instacart personal shoppers then pick and pack the items, which are delivered to customers’ doors in the designated time frame.

The companies said Instacart delivery will be rolled out to Walmart Canada stores in more markets based on customer engagement and use of the platform. Overall, Walmart Canada operates 410 stores across Canada and serves more than 1.2 million customers daily.

In the past year, Instacart has signed new partnerships with top North American grocery retailers such as Albertsons Cos., Aldi, Sam’s Club and Loblaw Cos. Late last month, Instacart announced a major expansion with The Kroger Co. that will grow their same-day delivery footprint by 50%.

Overall, Instacart has more than 300 retail partners, including large players like Publix, Costco, Ahold Delhaize USA and H-E-B as well as regional and local supermarket chains. Its service is accessible at 15,000 stores in the United States and Canada and reaches over 4,000 cities and covers 70% of all households, or 82 million households. According to Ganenthiran, Instacart aims to reach more than 80% of households in North America by the end of 2018.