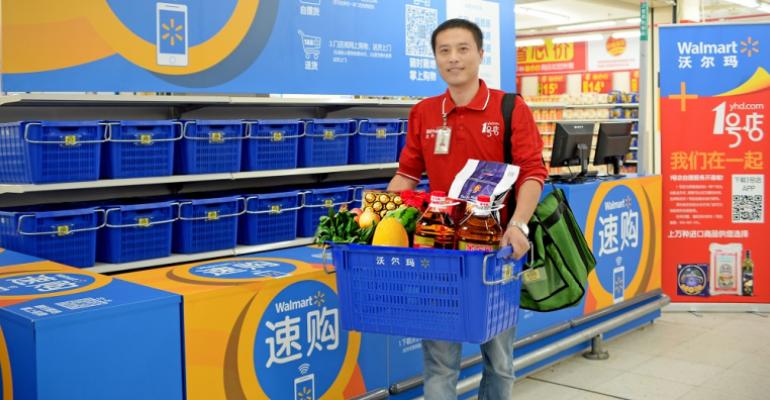 Walmart has begun testing its Walmart To Go same-day grocery delivery service, in one of its new stores in Shenzhen, China. The service can be accessed through a mini program on Tencent's WeChat, the leading mobile messaging app in China. Earlier this year Walmart partnered with Tencent in an effort to better reach Chinese customers.

According to a TechCrunch report, the test is taking place in the main Walmart WeChat mini-program, and appears when customers select the store where the delivery service is enabled.

The feature allows Walmart’s WeChat customers to place orders on mobile and then receive delivery in as little as one hour. Nearly 8,000 SKUs are available on the service, Walmart says, including fresh products, condiments, snacks, baby items, personal care items, homecare items, a range of products from Walmart’s private brand Great Value and Walmart’s Direct Import products sourced from around the world.

The deliveries will be fulfilled by Dada JD-Daojia, the crowdsourced online grocery delivery service partly owned by Chinese e-commerce giant JD.com. Walmart and JD co-invested $500 million into the platform earlier this year to shore up their defenses against e-commerce powerhouse Alibaba. However, Walmart To Go and Dada will continue to operate as separate platforms. (As for Alibaba, China’s largest e-commerce retailer inked a deal in August with The Kroger Co. to test sales of Kroger’s private grocery brands online.)

Walmart has been working on integrations with WeChat since the beginning of the year, then began scaling the programs in earnest in late March to early April 2018. It rolled out its Scan-and-Go technology, which allows Chinese shoppers to scan items in their shopping cart, then pay using a program within WeChat. In a five-month period, Walmart scaled this from 10 stores to more than 400 stores.

Although no official announcement about Walmart To Go in China has come out of its Bentonville headquarters yet, TechCrunch reported that “the service is being tested while Walmart collects customer feedback. However, there is signage in the store that informs customers about the option.”

Walmart’s moves in China, following its $16 billion acquisition of India’s e-commerce leader Flipkart in August, show the company’s serious ambitions in the Asian marketplace where it faces off against Amazon and a number of powerful homegrown players, most notably China’s Alibaba.