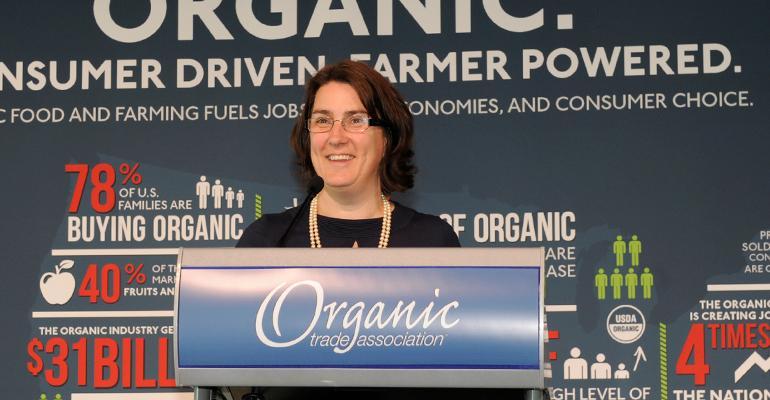 Laura Batcha will forever be known for her work with the Organic Trade Association. A bold thinker, Batcha championed the association's efforts as it transitioned from a niche industry trade group into mainstream policymaking organization.

Her 13-year tenure, the past 8 as a CEO and executive director, includes directing the 2017 lawsuit against the U.S. Department of Agriculture for its withdrawal of the final Organic Livestock and Poultry Production regulation. She also worked on three farm bills; notably, the 2018 Farm Bill set uniform standards for the industry and established permanent funding for Organic Agriculture Research and Extension Initiative.

For Batcha, there hasn't been one defining moment.

"It's healthy to have new leadership periodically. You can't stay for too long because you can't be a creative force at something over and over again."

"My approach is more step by step," said Batcha, the fourth director in the 37-year history of the association, as she prepares to move on. "I'm a small ball person, someone who tries to get on first base to get on second. I'm not a slugger."

That consistency has been a strong offensive strategy for OTA, allowing it to score in the long run.

Batcha substantially grew and expanded OTA's reach within Washington, D.C., developing task forces to tackle climate change and animal welfare. Under her helm, the industry has secured federal funding including the National Organic Program, the Organic Certification Cost Share Program and the Environmental Quality Incentives Program's National Organic Initiative. She's pushed for a modernized approach, with public-private partnerships to improve organic standards and championed the Continuous Improvement and Accountability in Organic Act, which calls on the USDA to clear National Organic Standards Board's backlog while improving transparency and accountability.

With the current farm bill set to expire in 2023, Batcha says there's a greater need for investment in organic research and cost sharing to support transitioning farmers and ranchers for "climate-smart" agriculture.

"The next leg of the journey will require some creativity and energy," said Batcha, who announced in 2021 she would step down this spring. Tom Chapman, who served as senior director of supply chain at Kinder's Sauce and Seasonings, is stepping into her position.

Her internal clock knows it is time, she says, because there's a 10- or 12-year expiration limit on anything.

"That's the outer edge of a creative burst," Batcha said.

"It's healthy to have new leadership periodically," she said. "You can't stay for too long because you can't be a creative force at something over and over again."

Batcha's journey into organics began as the owner and farmer of Green Mountain Herbs, an organic botanical business she sold to Tom's of Maine, where she served as the director of grassroots strategic planning and development. She stayed for a decade before deciding it was time to try something else.

Missing the organic industry, Batcha came to the association. "I honestly didn't know that much about OTA," she said. "But I knew was completely committed to organics and I really liked politics."

"Businesses in the natural and organic space are more capitalized than they were 20 years ago, but it's still an industry that draws people who want to do better and do good in the food system," Batcha said.

Throughout her tenure, Batcha says seeing members come to Washington, D.C., has been one of her most satisfying experiences.

"The empowerment you see from people in the political process when it's more than just a business to them," Batcha said. "There's always a handful of folks, first-timers, and their minds are just blown."

One of her favorite experiences was watching Jayson Werth, a former Major League Baseball outfielder who has an organic farm in Illinois. "Even though he's a major all-star, he was completely awestruck," said Batcha, who is a Washington Nationals fan.

Batcha had a similar transformative experience. Her first time lobbying on the Hill began after she started working at OTA. Back then, she said, "We were lobbying Congress to just support organics."

The USDA's organic program was in its infancy and had almost no staff and no money, Batcha said.

"It was so hard to for them to do the job the industry was expecting them to do," Batcha said. "We were primarily lobbying for appropriation dollars to the National Organic Program so they could grow with the industry."

To help the movement, Batcha said the OTA, which now has more than 9,500 organic businesses across a nearly $62 billion sector, used a metaphor comparing the organic industry's growth to a mustard seed that had matured into a watermelon.

"It's a life-changing experience to engage with your government, to try and make change happen that you believe in," she said.