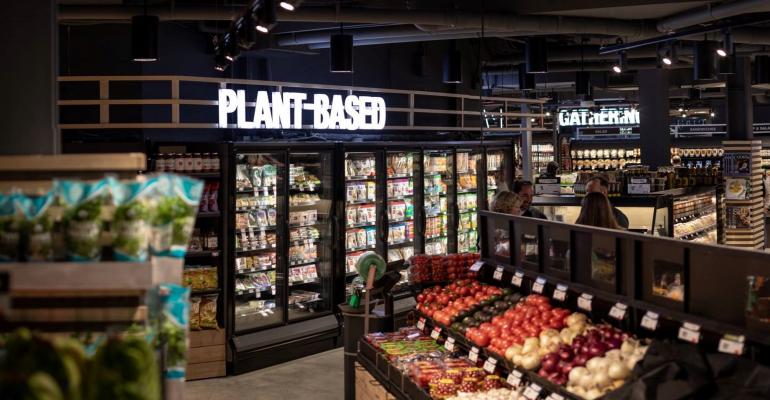 Giant Heirloom Market
The two largest subcategories of plant-based alternatives —milk/dairy and meat —will continue to dominate sales in the segment, according to a new report from Bloomberg Intelligence.
Issues & Trends>Organic & Natural

Plant-based foods are here to stay — and grow

Global retail sales of plant-based food alternatives may reach $162 billion by 2030 — up from $29.4 billion in 2020, according to a new report from Bloomberg Intelligence, “Plant-Based Foods Poised for Explosive Growth.” With that figure, the projected plant-based food market would comprise 7.7% of the global protein market.

The two largest subcategories of plant-based alternatives —milk/dairy and meat —will continue to dominate sales in the segment.

“Food-related consumer habits often come and go as fads, but plant-based alternatives are here to stay — and grow,” said Jennifer Bartashus, senior consumer staples analyst at Bloomberg Intelligence. “The expanding set of product options in the plant-based industry is contributing to plant alternatives becoming a long-term option for consumers around the world. If sales and penetration for meat and dairy alternatives continue to grow, our scenario analysis suggests that the plant-based food industry has the potential to become ingrained as a viable option in supermarkets and restaurants alike. Meat and dairy alternatives could even obtain 5% and 10% of their respective global market shares in the next decade.” 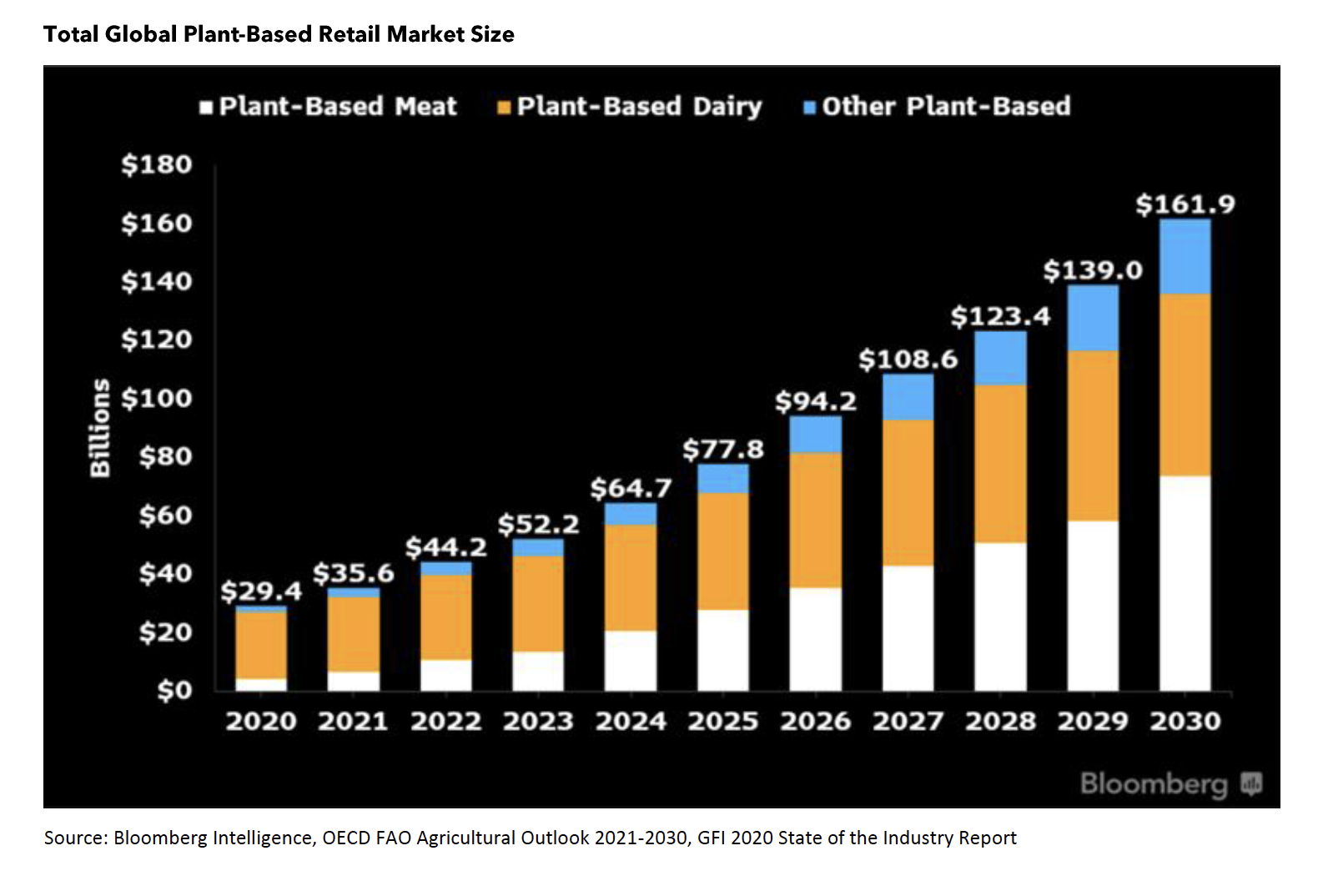 Related: In the dairy case, making more space for plant-based

The global plant-based alternative-meat market may grow to $28 billion by 2025, based on Bloomberg Intelligence analysis. This could translate into a $74 billion opportunity by 2030 if sales growth and penetration levels mimic those of plant-based milks to reach 5% of the total meat and fish market. Plant-based meat accounted for just 0.3% of total meat sales in 2020, but growth is accelerating as products become more widely available, consumer awareness grows, prices come down and the perceived health and sustainability attributes gain traction.

“Should the pace of these drivers be stronger than expected, plant-based meat retail sales could reach $118 billion in 2030,” the report noted.” A slower uptake, limited by regulatory issues and supply constraints, could result in a $37 billion market size.”

Growth in plant-based alternative-meat products will largely stem from shoppers looking to occasionally swap out meat proteins with something perceived to be healthier, the report said. Americans who follow a flexitarian diet — primarily vegetarian with occasional meat and fish — make up as much as a third of the population and are a key demographic for plant-based meat alternatives, according to the Good Food Institute. Households that favor meat alternatives tend to have children, skew to college-educated and have incomes over $50,000.

“The plant-based alternative meat market has the potential to significantly increase in size if sales growth and penetration levels follow the path of plant-based milks,” said the report. “Alternative meat accounts for under 1% of total meat category sales, while plant-based milks have grown to almost 15% of total milk sales as being added to the dairy cases makes it more easily discoverable for shoppers. Improved taste, broader availability and the commingling of plant-based alternatives in grocers’ refrigerated meat sections should help propel a similar surge in consumer adoption and sales growth.”

In addition, decreasing the price gap between higher-priced plant-based alternatives and conventional meat products will be another significant catalyst to drive regular consumption of plant-based meats. Both raw-material and manufactured product supply is improving, Bloomberg Intelligence noted, which supports the sales of plant-based alternative meat. “Scale is key because higher production volumes will help lower costs, which in turn will help shrink the price gap with conventional proteins and aid long-term adoption,” the report said. “Major players in the global plant-based protein market — including Archer Daniels Midland, Cargill, Roquette, Ingredion, Glanbia and Kerry Group — have expanded their plant-protein capabilities in recent years.”

While the plant-based dairy market is a more mature segment, Bloomberg Intelligence projects that the category has the potential to reach $62 billion by 2030, up from $23 billion in 2020 — reaching 10% of the total dairy market, up from 4.5% in 2020. Growth is aided by new formulations and products such as plant-based ice cream, cheese, sour cream and butter, as well as growing consumer concerns about health and sustainability. Nearly 75% of the global population is lactose-intolerant, the report noted, which forms a sustained driver for alternative milk and other dairy products.

Should the pace of these drivers be stronger than expected, plant-based dairy retail sales could reach $81 billion in 2030; a slower uptake, limited by less adoption or limited appeal, could result in a $50 billion market size.

Alternative milk is by far the largest component of the plant-based dairy market, accounting for about 75% of sales, according to Bloomberg Intelligence. “This is a much more mature category after the rapid adoption following the inclusion of Danone’s Silk soy milk in the refrigerated milk case in 1999,” the report said. “The largest players in the alternative-milk category include Danone, Hebei Yangyuan, Blue Diamond, Coconut Palm Group and Vitasoy. These companies have broad distribution networks that make products easily accessible to consumers. New formulations, such as oat milk — which claims greater sustainability benefits and a neutral taste — are driving growth for newer companies such as Oatly.”

Outside of plant-based meat and dairy, plant-based condiments and dressings as well as eggs and other items are still fairly nascent, the report noted. These items could still grow to $25.7 billion in 2030 from $2.3 billion in 2020.

Demographic and industry catalysts should help accelerate growth of plant-based alternatives and help differentiate the category as a long-term trend versus a fad, according to the Bloomberg Intelligence report. “This includes expansion of retail distribution points, growing consumer interest in healthier lifestyles, more consistent supply as companies improve forecasting and manufacturing capabilities, greater raw material availability, achieving price parity with conventional products and ongoing trials at restaurants,” said the report.