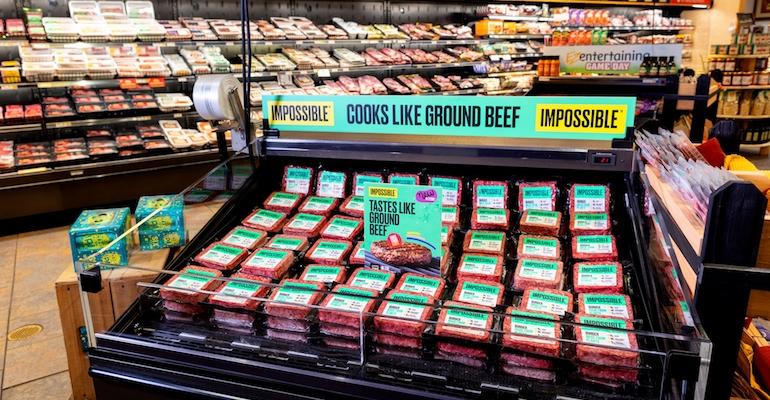 Less than a week after making its supermarket debut, the Impossible Burger is set to hit grocery stores tomorrow on the East Coast, starting with Wegmans Food Markets and Fairway Market.

Redwood City, Calif.-based Impossible Foods said Wednesday that all 100 Wegmans stores in seven states and two Fairway locations in Manhattan will begin selling the plant-based Impossible Burger on Sept. 26. The product made its global debut in grocery stores on Sept. 20 at all 27 Gelson’s Markets supermarkets in Southern California.

“Wegmans has offered the Impossible Burger in its burger bars and pubs in select stores since the spring of 2019, and our customers absolutely love it,” according to Ann Johnston, category merchant at Rochester, N.Y.-based Wegmans. “There’s a growing demand for plant-based options, so the fact that customers will now be able to prepare Impossible Burger at home is a big deal.” 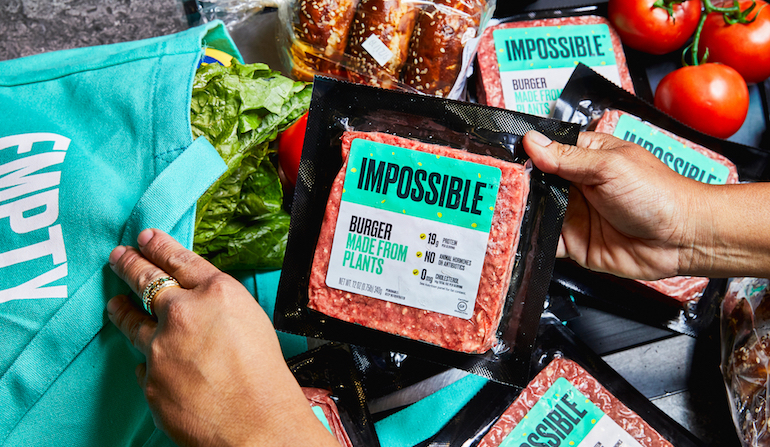 New York City-based Fairway, which operates 15 upscale supermarkets in New York, New Jersey, and Connecticut, also will carry a 12-ounce package of Impossible Burger priced at $8.99. Customers will find the item in the meat aisle and in the plant-based food section in Fairway’s stores at 74th Street and 86th Street in Manhattan.

“Fairway Market started as the city’s premier produce market in 1933, with the freshest fruits, vegetables and other plants. So being the first East Coast retailer to sell the world’s hottest plant-based food harks back to our roots,” Fairway CEO Abel Porter said in a statement. “We can’t wait for New Yorkers to experience the Impossible Burger, whether in our in-store gourmet kitchen or in their own homes.”

Despite being widely available in restaurants since 2016, the Impossible Burger wasn’t sold at grocery stores until last week when it launched at Encino, Calif.-based Gelson’s. Impossible Foods reported that the Impossible Burger, during its first full weekend at Gelson’s, outsold ground beef from cows based on revenue and total number of pounds sold and was the retailer’s No. 1 packaged good sold from Friday through Sunday.

"The Impossible Burger generated more excitement than any other single product we’ve seen in more than a half-century of operations,” stated Gelson’s CEO Rob McDougall. “In addition to exceptional sales and volume, the launch initiated a historic consumer reaction from both our loyal and new customers, who were thrilled to play a part in the future of food. We look forward to the continued success of our relationship with Impossible Foods.”

According to Impossible Foods, the Impossible Burger is on menus at more than 17,000 restaurants in all 50 states. Tomorrow’s East Coast launch at Wegmans and Fairway will quintuple the number of retail outlets that sell the product.

Plans call for Impossible Foods to roll out the Impossible Burger at leading grocery chains in key regions during the fourth quarter and in early 2020, as the company boosts production and capacity at its plant in Oakland, Calif., and with food co-manufacturer OSI Group.

“Three years ago we introduced plant-based meat to the world in Manhattan at Momofuku Nishi, where Chef David Chang said the Impossible Burger blew him away,” commented Impossible Foods CEO and founder Patrick Brown. “Now all home chefs in the Northeast can experience their own ‘David Chang moment’ in their own kitchens and accelerate the inevitable consumer movement toward plant-based food.”