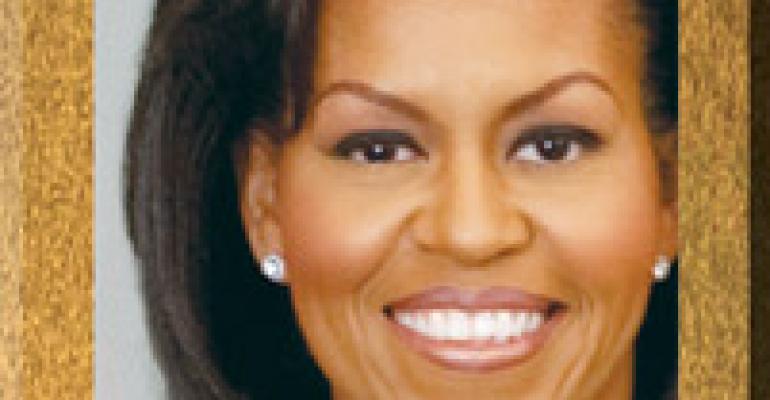 When Michelle Obama took the stage with Wal-Mart Stores executives in January to announce the retailer's landmark nutrition goals, it seemed an odd alliance. Why, critics wondered, was the first lady of the United States partnering with a retailer, much less one with an often-maligned record on health and wellness?

Those who closely followed her fight against childhood obesity, however, knew Obama didn't want to exclude anyone from the table. Wal-Mart's plan was significant: By 2015, the company promised, it would reduce sodium by 25%, sugars by 10% and eliminate trans fat in many of its private-label products. It would also establish a labeling system to identify nutritious foods, and build more stores in underserved neighborhoods.

“When 140 million people a week are shopping at Wal-Mart, then day by day and meal by meal all these small changes can start to make a big difference for our children's health,” Obama remarked at the time.

From corporate partnerships to tending the White House garden, the first lady has championed a broad range of initiatives, all leading back to her umbrella program, Let's Move! Established early last year, that platform has since joined with a variety of industries and audiences, seeking to improve meal options and promote regular exercise among children. Recent examples include Let's Move! in Indian Country, aimed at Native Americans, and Let's Move! Museums and Gardens, which has partnered with cafeterias at zoos, parks and museums across the country.

“I always say it's like a tree with a lot of fruit on it,” said Eddie Gehman Kohan, who tracks Obama's progress on her blog, obamafoodorama.com.

Her impact on the supermarket industry has been significant, with companies frequently invoking her name when announcing new health initiatives. When the Grocery Manufacturers Association unveiled its Nutrition Keys labeling program last year, it claimed to be answering the challenge Obama had set forth. And when manufacturers banded together to form the Healthy Weight Commitment Foundation, they vowed to work with the first lady to cut 1.5 trillion calories from the products they make.

With this increase in awareness have come legislative victories. In December, President Obama signed into law the Healthy, Hunger-Free Kids Act, a $4.5 billion bill backed by the first lady that expands the availability of free lunches and improves the nutrition quality of meals in schools.

Look for Michelle Obama to continue expanding Let's Move!, and to accelerate her efforts to promote it. She travels frequently to schools around the country as well as internationally, like a recent trip to Africa. Last year, she tapped former White House chef Sam Kass to become a senior policy advisor, a position that has him traveling the country promoting Let's Move! and other healthy-eating initiatives.

Other promotions and partnerships are sure to come as Obama seeks to do no less than change America's attitude towards health and wellness.

“She truly has created a national conversation about food, and an incredible coalescing of people who want to work on food and fitness issues,” said Gehman Kohan.