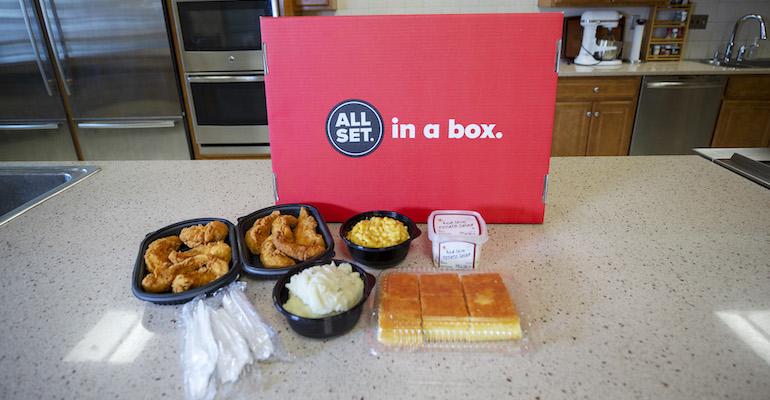 The Giant Company
Customers call ahead or order in-store for an All Set in a Box meal, which is ready within 15 minutes, according to Giant.
Product Categories>Prepared Foods

Expanding its lineup of family meal solutions, The Giant Company has launched “All Set in a Box,” a ready-to-eat hot dinner package that offers a main course and sides for four people.

Carlisle, Pa.-based Giant said Monday that customers call ahead or order in-store for an All Set in a Box meal, which is ready within 15 minutes. Entree choices include taco kits, eight pieces of chicken, ribs, rotisserie chicken and chicken tenders. Side dish and bread options range from mashed potatoes, mac and cheese, coleslaw, macaroni salad and pepper slaw to cornbread, biscuits and more. 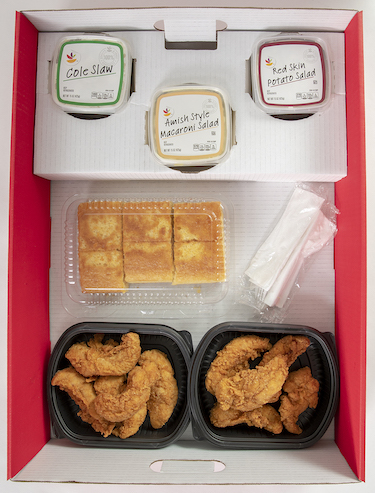 The All Set in a Box concept offers an entire family meal "that is all set to eat at prices that won’t break the budget," said Giant's John MacDonald. (Photo courtesy of Giant)

Most All Set in a Box meals cost less than $5 per serving, according to Giant. The offering is available in-store at Giant and Martin’s supermarkets from 3 p.m. to 7 p.m. daily.

“While families are spending more time gathered around the table enjoying meals together, many are also facing meal fatigue when it comes to what they should prepare,” John MacDonald, director of meal solutions and marketing operations at Giant, said in a statement. “The Giant Company regularly inspires our customers with various quick, easy and affordable meals for busy families from ready-to-eat, ready-to-heat and ready-to-cook.”

All Set in a Box joins Cook-in-Bag, a new private-label line of ready-to-cook dinner entrees that Giant rolled out last summer. Including pork, chicken and seafood dishes, the Cook-in-Bag entrees come already flavored in an oven-ready bag for easier cooking and cleanup. Other Giant meal offerings include in-store meal kits, ready-to-heat entrees and sides, and a range of grab-and-go items, such as prepared sandwiches, salads and hot foods.

Giant noted that its focus on convenient meals reflects its “For Today’s Table” company mantra, which focuses on bringing families together over a meal. The grocer also cited an October 2020 FMI-The Food Industry Association survey, which found that 47% of respondents had difficulty in coming up with new meal ideas, and 53% were challenged by not being in the mood to cook.

“Everything we do is ‘For Today’s Table,’ and our new All Set in a Box takes it to the next level, offering an entire family meal that is all set to eat at prices that won’t break the budget,” MacDonald commented.