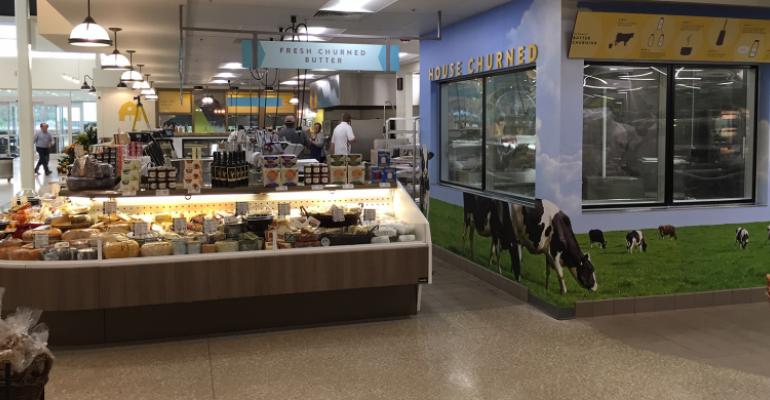 Niemann Foods Inc. was venturing into new territory in more ways than one when it opened Harvest Market last October in Champaign, Ill.

Niemann Foods Inc. was venturing into new territory in more ways than one when it opened Harvest Market this past October in Champaign, Ill.

The store was the first of its kind for NFI: a market for foodies with a high level of local sourcing and a carefully curated product assortment. But it also housed NFI’s first-ever restaurant, a chef-driven eatery called The Farmhouse that adheres to the foodie philosophy of the overall store.

“We felt this would be a very natural extension of the supermarket,” said Gerry Kettler, director of consumer affairs at Quincy, Ill.-based NFI, which operates the County Market chain and other banners in the Midwest. “It’s a whole new concept for us. We are used to people buying groceries and taking them home, but it adds a whole new level of connectedness when you are actually feeding them a hot meal.”

The restaurant is open for breakfast, lunch and dinner, with menus featuring locally sourced ingredients — including butter that is churned right in the store.

“There is nothing better than bread made from scratch using locally sourced grains with butter that was just made 20 feet away,” said Kettler. The in-store restaurant — The Farmhouse — has generated “overwhelming” positive feedback from customers. Adjacent seating is offered in the mezzanine. The Farmhouse and its adjacent seating areas — including a mezzanine level and an outdoor balcony — form the centerpiece of the store’s prepared foods offerings, which also include a bakery and deli area displaying a variety of chef-driven prepared foods, sushi and a salad bar.

True to its focus on culinary creativity, the deli offers salads and other fare prepared by a professional chef garde manger, who works in the produce department crafting fresh offerings not typically found in traditional supermarkets. The chef garde manger also supplies all of the vegetables used in the restaurant.

NFI’s staff took great care in selecting products and vendors for the Harvest Market supermarket, and visited its suppliers to become familiar with the products it offers, and to be able to tell the story behind them.

The restaurant and other prepared foods offerings also reflect that approach. For example, the breakfast menu explains that the eggs are free range, and harvested from Little Farm on the Prairie in Saunemin, Ill. The lunch and dinner menu includes a variety of sandwiches and salads, along with what it calls “simmering pots” — soups, stews and casseroles made from scratch each day and served with scratch-made buttermilk biscuits.

“These are chef-driven recipes, and the chefs understand the need for transparency with our customers,” said Kettler. “If there’s an omelet, the eggs come from within an hour of the store, and the grain in the muffin is being grown and milled probably within an hour of store.”

Service is conducted akin to some fast-casual restaurants, with customers placing orders at the counter and having the food delivered to their table by The Farmhouse staff.

Even the design and layout of The Farmhouse — with seating overlooking the floral department and the produce offering — signal the concept of “fresh and open” that the store seeks to convey.

While fresh and local are paramount to the restaurant concept, it does not necessarily tout itself as healthful, and instead seeks to appeal to a broad range of customers, Kettler explained.

“We can still be indulgent,” he said. “We take a practical approach to feeding people — the overriding concept is offering great food that tastes good, and the fact that you know what you are eating.”

Lunch has by far been the leading offering at the store, followed by breakfast and then dinner. The Farmhouse also draws a crowd for its weekend brunch — Kettler said the weekends seem to attract a lot of couples shopping together, who often dine together at the restaurant as part of the trip.

Kettler said the company conducted its hiring for the store differently than it usually does, taking special care to find workers who had a passion for food and a passion for service. Butter is made "just 20 feet away" from where bread is made from scratch.

“We have been very lucky, and found that crowd, and now we are learning what it means to nurture that spirit,” he said.

The hiring for the restaurant has also broken new ground for the company.

“We are hiring chefs and creative people, which doesn’t always fit into that nice tight box that we are used to operating,” said Kettler. “We are learning how to enjoy the fruits of creativity.”

Kettler said he thinks the restaurant is having a positive impact on sales throughout the store.

“For one thing, our customers get to sample a lot of the things that are available in the store, such as the eggs and the bacon,” he said. “Plus, it gives customers a whole new way for them to experience the store. They can relax and have a meal, and spend a moment with the family, or with their kids.”

Kettler described The feedback from the customers as “overwhelming,” but admitted that the company still has a lot to learn about foodservice before expanding the restaurant concept to additional locations.

“It is a whole new way to engage with our customers,” he said.