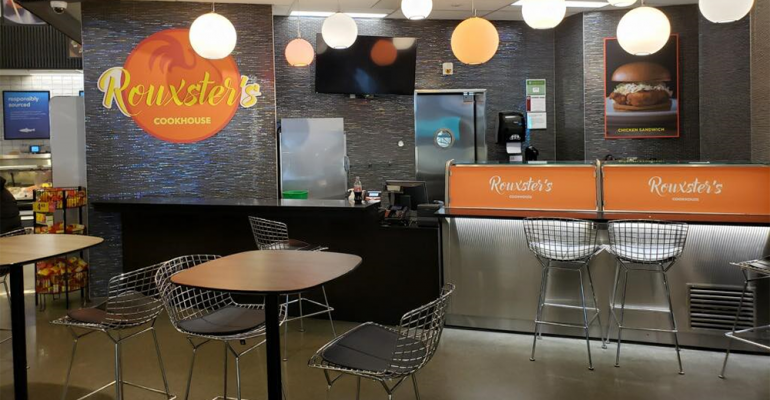 Upscale grocer Mariano’s has expanded its foodservice offering with the addition of two restaurant vendors.

The Kroger Co. chain opened a new concept, Rouxster’s Cookhouse, at its Bronzeville, Ill., store in late March and soon plans to open another at its Park Ridge, Ill., store. Just days before, barbecue food chain Pork & Mindy’s launched mini restaurants in both locations, the first of more than 20 to be opened this year across Mariano’s 44 Chicago-area stores, according to Amanda Puck, director of strategic brand development for the supermarket retailer.

Rouxster’s serves comfort food with robust flavors and fresh ingredients. Items include oven-roasted or Nashville hot chicken and fried catfish sandwiches, a grilled Jamaican jerk chicken sandwich with Chef Meyer's special jerk sauce and Shrimp Po Boy. All sandwiches come with a special sauce, coleslaw and pickles, and all seasonings, batters and breading are created by Meyer. Other menu choices include turkey chili; freshly made chicken gumbo soup; side dishes such as smoked gouda mac and cheese, potato salad and collard greens; and desserts like banana pudding, bread pudding and sweet potato pie.

So far, Mariano’s has planned just the two locations for Rouxster’s, Puck said. The Rouxster’s and Pork & Mindy’s counters are situated in a foodservice area with open seating at the Bronzeville and Park Ridge stores. Customers also can sit at high-top tables at the Bronzeville location.

“Chicago loves Mariano’s,” Meyer said. “Mariano’s has raised the standard for cultivating authentic, meaningful relationships with local business owners to create supermarket dining experiences that cater to its loyal customers. I’ve created restaurant concepts in Chicago for the last 30 years, and I know it means a lot to people, especially in a community such as Bronzeville, to be offered a quality brand like Rouxster’s with cultural flair.”

Meanwhile, Mariano’s will be a growth vehicle for Chicago-based Pork & Mindy’s, which has said it plans to expand to 30 locations by 2020.

The fast-casual barbecue restaurant currently has six venues: four in Chicagoland (including a Wrigley Field location), one in Minneapolis and one in Denver. Two more are slated to open soon in Chicago’s Irving Park section and in Elmwood Park, Ill.

Puck said the Pork & Mindy’s counters will open in Mariano’s stores over the next few months. The grocer was the first retailer to carry Pork & Mindy’s bottled sauces in 2015. Pork & Mindy’s launched its first restaurant in Chicago’s Bucktown neighborhood in 2016. The brand was founded by Food Network star Jeff Mauro, known as the “Sandwich King,” and current CEO Kevin Corsello.

“Mariano’s is deeply committed to supporting local products and community partnerships, and great-tasting food items our customers will enjoy,” commented Michael Marx, president of the Roundy’s Division at The Kroger Co. “At Mariano’s we are all about the experience, and Rouxster’s Cookhouse and Pork & Mindy’s will provide just that.”

Other Mariano’s foodservice concepts include Todd’s BBQ at select locations and Oki Sushi, which serves restaurant-quality, made-to-order sushi, poke bowls and buddha bowls from trained chefs at all of the supermarket chain’s stores. Mariano’s also has pizza stations, sandwich and taco bars, and other concepts — including oyster and liquor bars — that vary from store to store.