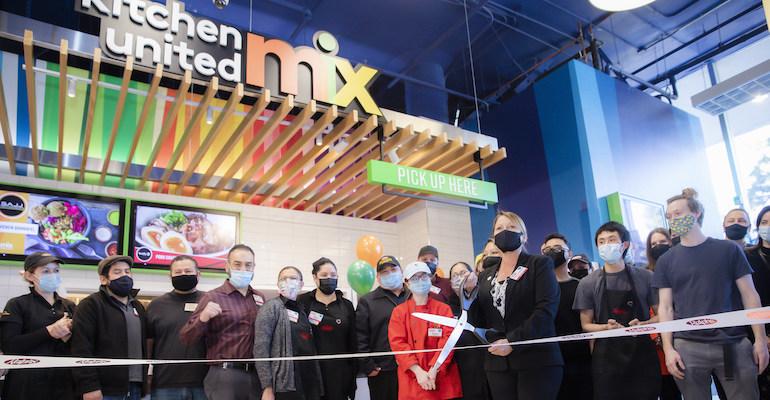 The Kroger Co.
At the Kitchen United MIX location in Ralphs' Westwood store in Los Angeles, shoppers can mix orders from multiple restaurants and have their purchases grouped on one receipt.
Product Categories>Prepared Foods

Ralphs Grocery has launched a ghost kitchen inside its store in the Westwood section of Los Angeles under a partnership between parent Kroger Co. and Kitchen United.

The off-premise restaurant kitchen, opened this week, allows customers to place orders via web, mobile or an in-person ordering kiosk using Kitchen United’s MIX restaurant hub platform and then pick up their meals on-site or have them delivered. Currently, customers can choose from 10 eateries, and they can mix orders from multiple restaurants and have their purchases grouped on one receipt.

“When our customers think of food, they think of Kroger,” Dan De La Rosa, group vice president of fresh merchandising for The Kroger Co., said in a statement. “The Kitchen United collaboration provides the fresh, on-demand meals our customers crave. It is one more innovative example of how Kroger is fulfilling its commitment to anything, anywhere, anytime.” 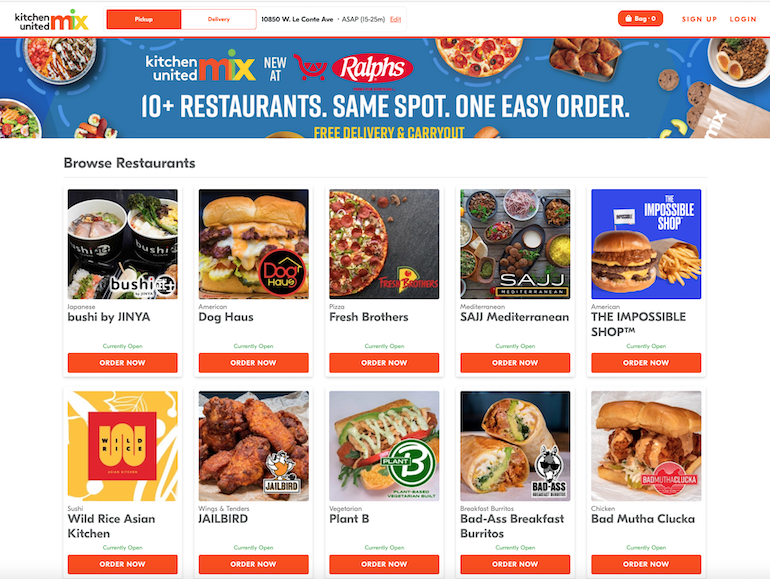 Currently, Ralphs customers can choose from 10 food vendors at the Westwood Kitchen United MIX site, ordering online or in person.

“We couldn’t be prouder that Kroger and Kitchen United chose to open the collaboration’s first location in Ralphs,” commented Kendra Doyel, vice president of merchandising at L.A.-based Ralphs, which operates about 190 stores in Southern California and the state’s Central Coast region. “Our customers come to us to find the freshest food and to answer the all-important ‘what’s for dinner’ question. This collaboration provides our customers one more simple meal solution that they can pair with Ralphs’ fresh products.”

The Kitchen United partnership marks Kroger’s second on-site ghost kitchen collaboration announced by Kroger since the fall of 2020. That October, the grocer unveiled plans to launch two ghost kitchens with ClusterTruck inside stores in metropolitan Indianapolis and outside Columbus, Ohio, for on-demand delivery of freshly prepared meals. The rollout followed a pilot of a meal service — dubbed Kroger Delivery Kitchen Powered by ClusterTruck — from off-site “scratch kitchens” in late 2019.

“We proudly operate successful ghost kitchens across the country and will apply that expertise to reimagine takeout and delivery within Kroger stores,” stated Michael Montagano, CEO of Pasadena, Calif.-based Kitchen United. “Our work together provides millions of Kroger customers access to their favorite restaurant cuisines in a convenient supermarket format, while providing Kitchen United and our restaurant partners a high-touch, interactive storefront. We are excited to bring this creative solution to the Westwood community.”