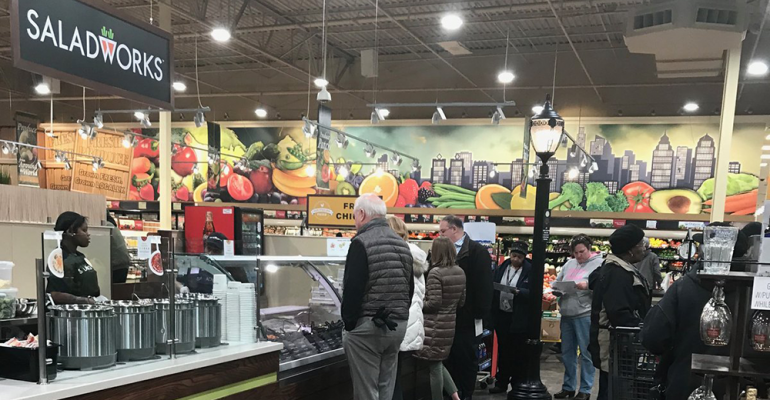 The Saladworks location at a Brown's Shoprite on Island Avenue in Philadelphia.
Product Categories>Prepared Foods

After a successful pilot, fast-casual salad restaurant chain Saladworks this year aims to grow its presence at ShopRite supermarkets in the Philadelphia area.

“The store is doing extremely well. So we are expanding in the next 60 days into two more stores, with plans to grow in this category aggressively,” Sugrue told Supermarket News in an interview. 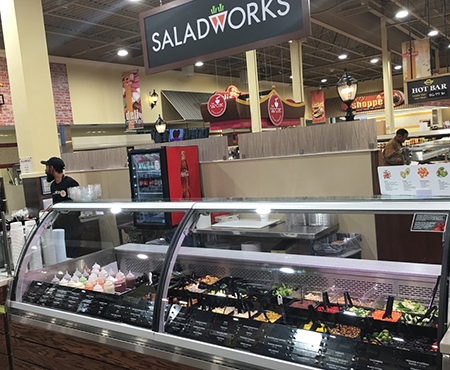 If the new Saladworks outlets perform as expected, another three or four more could follow at Brown’s supermarkets within the year, he added. Westville, N.J.-based Brown’s owns and operates 11 ShopRite and two Fresh Grocer stores in the Philadelphia area.

“Part of our mission is to put healthy food within the reach of everyday consumers. We want to put fresh, veggie-centric meals in front of as many people as we can,” Sugrue said. “To be able to go to where the people are, we’re opening more locations and expanding our traditional and nontraditional locations, such as airports, schools, colleges, military bases and office buildings. Grocery stores have a tremendous amount of traffic and people who are looking to eat healthy.”

Salad bars are common in U.S. supermarkets nowadays, but Sugrue noted that many consumers consider them unsanitary and not well-maintained.

“What we’re seeing with salad bars is that consumers’ hygiene standards have gone up dramatically, and for good reason. Increasingly, people are concerned about eating out of salad bars because they don’t want others reaching their hands over the food they plan to eat. They also don’t like the concept of someone possibly dropping bacon bits into the red peppers if they’re vegetarian. So we’re finding that salad bars are falling out of favor, they’re not profitable for grocery stores, they have a lot of waste and they take up a lot of space,” he explained.

“In the same space or less than a money-losing salad buffet, we can place a full Saladworks restaurant and deliver our core menu to consumers — made exactly the way they want,” he said. “And they’re able to sit in the dining space of the grocery store or take it home with them. The consumer response has been terrific.”

The Saladworks at the ShopRite on Island Avenue, situated in Philadelphia’s Penrose Plaza, takes up 150 square feet and stands in an island space near the store’s front entrance. Saladworks’ compact footprint makes it a flexible prepared-foods option, according to Sugrue.

Besides made-to-order salads — with a choice of about 65 ingredients, including greens, pasta, protein and dressings — customers can get signature salads, sandwiches, paninis, soup, beverages and desserts. That means a wide range of potential meal solutions for supermarket customers.

“When you get into a grocery store at 6:30 at night, rather than take the time to go and get the ingredients to make a salad, the opportunity to have someone make it for you while you’re doing your fill-in shopping has strong appeal,” said Sugrue said. “And it gives us the opportunity to put a fresh meal experience within an arm’s reach for more consumers.”

Saladworks has become a shopper destination in itself at the Island Avenue ShopRite, which also houses Southern Fried, The Wok and Brown’s Beer Garden and The Wine Cellar outlets as part of the grocer’s Chef’s Market concept.

“We went in there thinking we would leverage their traffic, and certainly we are. But what we’re also finding through our marketing and loyalty program, website and social media is that people come into the store to go to the Saladworks,” Sugrue said, adding that these customers also are making other purchases while in the store.

“From talking to people at Brown’s, they believe a very meaningful percentage of these guests are coming in for the Saladworks and they’re able to capture new business and differentiate themselves from other grocery chains,” he said.

Currently, Saladworks has 100 restaurants in 17 states. Earlier this month, the company said it’s on track to open 17 locations this year, including 10 commitments from existing and new franchisees. Besides the new outlets in Brown’s supermarkets, plans call for Saladworks to open locations in Rhode Island, Colorado, Ohio, Virginia, California, Minnesota and Arkansas. The new restaurants will feature changes rolled out in 2018, including a smaller footprint, a streamlined equipment package, an enhanced operational model, new technology, and new offerings like warm grain bowls and aguas frescas beverages.

More supermarket locations also are in the offering, he added. “There are other grocery chains with a desire to compete by offering restaurant-branded food that is good to go, delicious and healthy. We think this will be very relevant for a number of chains around the country.”