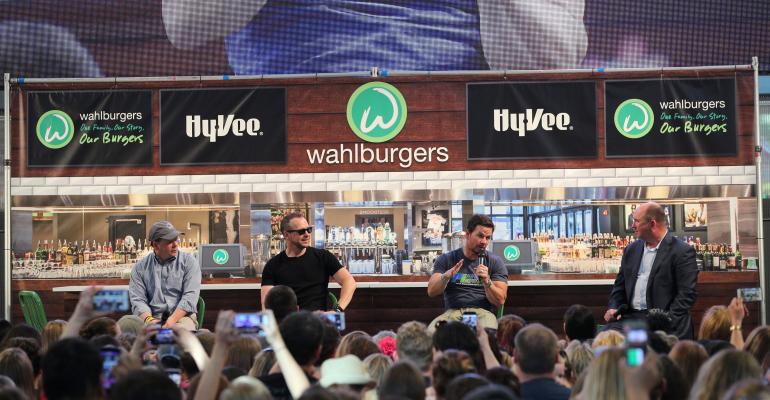 Getty Images
Donnie, Mark and Paul Wahlberg greet fans with Hy-Vee CEO and President Randy Edeker at the grand opening of their Wahlburger restaurant at Mall of America on May 31, 2018 in Bloomington, Minnesota.
Product Categories>Prepared Foods

Grocery retailers are expanding their partnerships with proven restaurant concepts to offer consumers the convenience of in-store foodservice from brands they know and trust.

Hy-Vee, for example, inked and agreement with Wahlburgers in 2017 to open dozens of locations of the celebrity-driven burger brand, including freestanding units. This week, the company said it would focus on opening Wahlburgers restaurant locations inside its stores exclusively, a spokeswoman for the retailer told SN.

The move comes as the company shuttered its stand-alone Wahlburgers location in West Des Moines, Iowa, which is also where the retailer is based.

“With the changing nature of the restaurant business combined with staffing challenges, we are evolving our strategy when it comes to standalone Wahlburgers restaurant locations,” said Dawn Buzynski, assistant VP of communications at Hy-Vee. “Hy-Vee will now only be opening Wahlburgers at Hy-Vee locations going forward.”

The retailer currently has 61 Wahlburgers at Hy-Vee stores and plans to open more than 20 additional locations across its eight-state operating region this year alone, making Hy-Vee the largest franchisee of Wahlburgers, she said.

Buzynski also said all employees at the company’s West Des Moines restaurant have been offered other positions with Hy-Vee/Wahlburgers locations.

The move comes as other retailers also expand their in-store branded restaurant locations.

Customers can combine orders from the different brands on the same check. Orders can be placed via a kiosk or through their phone, and the meals are prepared in a central kitchen.

Kroger opened three of the Mix Food Halls in the central Ohio area in the past few weeks, after testing the “virtual food hall” concept in other markets, including Dallas, Houston and Los Angeles.

H-E-B, meanwhile, has been expanding its own-brand in-store restaurants, including South Flo Pizza and True Texas BBQ, which was recently named best chain barbecue restaurant by Texas Monthly. The San Antonio-based company said it will include both those concepts in a new, two-story, 97,00-square-foot supermarket in Lake Austin, Texas, along with a coffee shop that offers breakfast tacos and a full bar.

That follows the opening in 2020 of a food hall in Austin, Texas, called Main Streat by H-E-B Food Hall & Bar, which includes five restaurant concepts and a bar.

FMI’s recent Power of Foodservice at Retail 2022 report found that these retailers may be on the right track.

“To compete for the away-from-home dollar … retailers should consider adopting restaurant-style amenities,” according to the report.

For example, the research found that 50% of shoppers said the ability to order grocery foodservice items in advance through a mobile app or website and pickup at an inside pre-order station is appealing. Drive through lanes (48%); a separate checkout in the foodservice area (44%); delivery by the grocery store (42%), and outside pickup stations (38%) are other potential offerings to attract grocery shoppers to foodservice, according to FMI.

“At a time when consumers are rethinking where to put their food dollars, retailers need to demonstrate the value of grocery foodservice and exceed expectations,” said Rick Stein, VP of fresh foods, FMI, when the report was released.

**
Since the pandemic, grocery stores have been capturing a larger percentage of stomach share via food service at retail offerings and investments in prepared foods. What do things look like for your company / store? Are you growing in either of these areas? Let us know in the comments below or email your thoughts to SN Executive Editor Chloe Riley at [email protected]