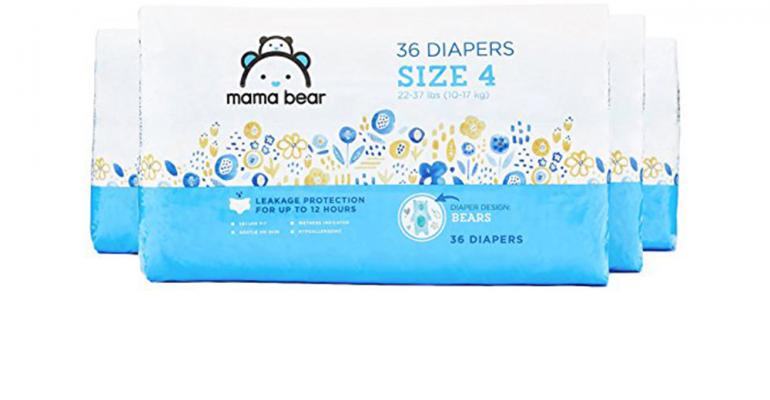 Private label grocery items and certain private label baby products were among the best own-brand performers on Amazon this year, according to a new report from e-commerce analytics firm One Click Retail.

Sales through Amazon.com of the 365 Everyday Value brand from Whole Foods Market, which Amazon acquired at the end of August, totaled $10 million in just three months, One Click Retail reported. The brand had average weekly sales gains of 9%.

The 365 Everyday Value brand was consistently the No. 2 performer in sales volume behind Amazon’s main private label, AmazonBasics, during the short time it was available, and was the fourth most popular brand for the full year.

“We can pretty much guarantee that this is going to be a huge brand on Amazon in 2018,” said Spencer Millerberg, CEO at Salt Lake City-based One Click Retail.

The research firm estimated that Amazon Basics would finish the year with about $400 million in sales, or about 85% of Amazon’s total private label volume. It was followed by the Pinzon bath and bedding brand and Amazon Elements, which includes baby wipes and vitamins and supplements.

The research found that the success of the 365 Everyday Value line has eroded sales of Amazon’s other grocery brands, including Happy Belly and Wickedly Prime. Happy Belly, for example, was Amazon’s leading brand of trail mix at the end of the third quarter, but the brand was discontinued for trail mix in early October.

The Happy Belly line is still being used for coffee and spices, “but it hasn’t recovered from the sales drop caused by losing trail mix sales” to the 365 brand, One Click Retail reported.

Meanwhile, sales of Wickedly Prime — Amazon’s trend-forward line of snacks, condiments, soups and other grocery items — have “flatlined,” the research firm found. That line was introduced in December 2016 for Amazon Prime members only.

Amazon could seek to revive the grocery brands, however, Millerberg said in the report.

“Amazon knows how to transform a temporary setback into a future success, as shown by the recent successful relaunch of the Mama Bear brand,” he said.

Mama Bear, the label Amazon now uses for diapers, detergent and other products, is another of Amazon’s private label success stories for 2017, according to One Click Retail. Total sales since the brand was relaunched in August topped $500,000, the firm found, and sales more than doubled from October to November, when the diapers were added to the brand’s portfolio. Amazon had briefly sold private label diapers under its Amazon Elements brand, but had discontinued the offering in January 2015.

Mama Bear Diaper Genie refills make up about 40% of the brand’s sales, with the rest coming primarily from the new diapers and from laundry detergent.

While Amazon no longer sells diapers under the Elements brand, the company has retained that label for baby wipes, which have continued to perform well. One Click retail said Elements baby wipes were a “huge success” in 2017, with growth of 94% over estimated 2016 levels, to more than $15 million.

In February, Amazon added vitamins and supplements to its Elements line, and those products added another $1 million-plus in sales for the year, according to One Click Retail estimates.

"This year, Amazon's private brands showed enough success stories to guarantee that Amazon won't be backing off any time soon," said Millerberg. "This is a wake-up call for brands selling on Amazon — it's truly time to pay attention."