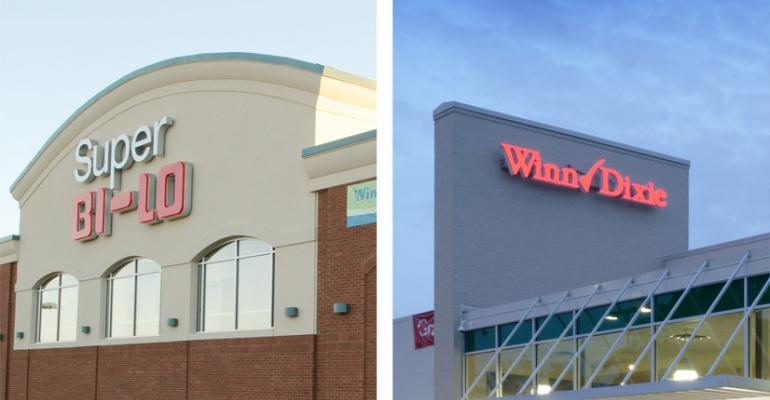 JACKSONVILLE, Fla. — A year since closing the deal to bring Winn-Dixie and Bi-Lo together, the combined company is working as a single entity focused on growth — including the potential of additional mergers.

“In addition to organic store growth and growth through store capital investments, we believe we will have opportunities to grow through acquisition,” Randall Onstead, president and chief executive officer of Bi-Lo Holdings, told SN. “The infrastructure we’re building together today will be capable of adding more stores in and around our eight-state footprint. Having gone through an integration prepares us well for other acquisitions should an opportunity arise.”

Onstead, who provided written answers to SN’s questions, said the integration of Bi-Lo and Winn-Dixie is “materially through,” with a new executive team complete and back-office operations consolidated in Winn-Dixie’s former headquarters here. He said the company has maintained a regional office and a customer call center in Bi-Lo’s former base of Greenville, S.C.

Announced late in 2011 and completed last March, Bi-Lo’s $560 million acquisition of its larger neighbor — a deal backed by Bi-Lo’s owner, the Dallas-based hedge fund Lone Star Funds — took some in the industry by surprise. But it may have helped to set off a new wave of industry deal making that has since seen Supervalu break up and Harris Teeter seek strategic alternatives.

Onstead said the deal and the integration has gone largely as planned, saying the combined scale creates “great opportunity for us and our customers.” He called the elimination of duplicate jobs — reports last month said 130 staffers in Greenville were to be let go this week, on top of previous eliminations — was the hardest part of the integration.

“We’ve come a long way in 12 short months, and our associates have a lot to be proud of,” Onstead said. “Though not 100% complete, we are materially through our integration. Suppliers can now think of us as a fully integrated company. It’s been a huge effort, with many associates to thank for their part. We said we didn’t want the integration work to impact our customers or consume more of our time than our efforts to improve our stores and grow our top-line. That’s been the case.”

Onstead said there have been “dozens” of instances where the company has adopted best practices, citing for example, Bi-Lo stores converting to the better developed pharmacy system of Winn-Dixie, and some merchandising strategies and field structures at Bi-Lo rolled out to Winn-Dixie.

Stores have yet to combine their distribution infrastructure, however. While Winn-Dixie self-distributes, Bi-Lo is supplied by C&S Wholesale Grocers in an agreement that still has “a couple more years” to complete. Onstead said he was satisfied with both options, but added “we are always open to considering opportunities to optimize all aspects of our business, including our supply chain.”

Onstead’s growth strategy includes growing sales at existing stores through investment to support neighborhood marketing and merchandising. He said he also sees opportunities for acquisitions and new stores within the current footprint.

Onstead declined to disclose sales or profit figures but said he was pleased with the company’s performance since the merger.