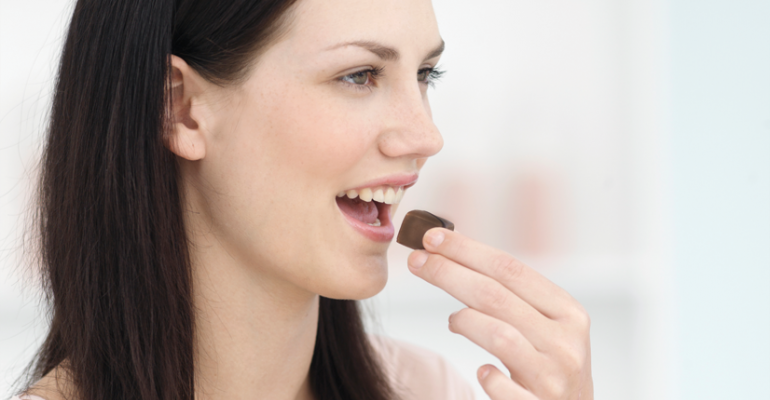 At their desk..In their car..Even while they’re exercising, Americans snack more than ever before.

And while the majority of consumers (57%) say its “important” or “very important” for snacks to be healthy, the desire for an indulgent treat tops all other snacking triggers, according to a Hartman Group poll.

“We hear consumers say on a regular basis that in order to be healthy they need to snack, but 28% of Americans snack because they want an indulgent treat,” said Melissa Abbott, senior director of culinary insights for the Bellevue, Wash.-based consulting firm. 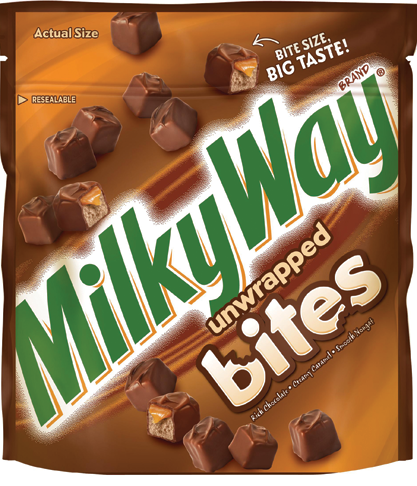 The iconic candies have been stripped of their wrappers, shrunk into bite size cubes and packaged in resealable pouches designed for noshing on the go.

“We realized that consumers are busy, they have demanding lives and want great taste and convenience on the go,” said Hershey spokesman Jeff Beckman.

Hershey has since added Rolo, Twizzlers, Jolly Rancher and Kit-Kat minis to their snack portfolio.

“Sales of our hand-to-mouth offerings have been very strong and key drivers of growth for Hershey for the past two-and-a-half years,” said Beckman. “It’s part of an overall focus on innovation to bring excitement to the confectionery category.”

Indeed, other candy companies are rolling out easy-to-eat miniatures.

This month, Mars launched Snickers Bites and Milky Way Bites in a 2.8-ounce bag and 8-ounce standup package, retailing for $1.49 and $2.99, respectively.

This summer, Wrigley will roll out Starburst Minis, with a lighter texture than regular Starburst, in an 8-ounce resealable pack designed to go wherever snackers go.

“We know consumers are looking for packaging that gives them flexibility for storing and traveling, and that has a structure that helps to enhance freshness,” said Caroline Sherman, manager of marketing communications for Wrigley.

“This is [candy] that someone wouldn’t necessarily take home to eat. They eat it in their car or even in the store while they’re shopping,” he said.

Indeed, the hand-to-mouth segment of confectionery supports a new eating occasion, and an incremental sales opportunity at AFS, said Christensen.

He positions the resealable bags at eye-level, just above traditional lay-down multipacks of snack size candy in the aisle. Since they’re designed for immediate consumption, the bite-size packs are also sold at checkstands.

The portable pouches are a popular choice since they’re smaller and less expensive than bags of wrapped, snack-sized bars. With the miniature packs there is also less risk of overindulgence, noted Christensen.

“The candy category isn’t one that people go to to get a healthy treat, but if you have little bite size pieces, you can monitor the amount you eat and maybe not eat as much,” he said.

But the opposite may be true. According to researchers, in the absence of visual cues — like empty candy wrappers — it’s easy for snackers to lose track of how much they’ve consumed. 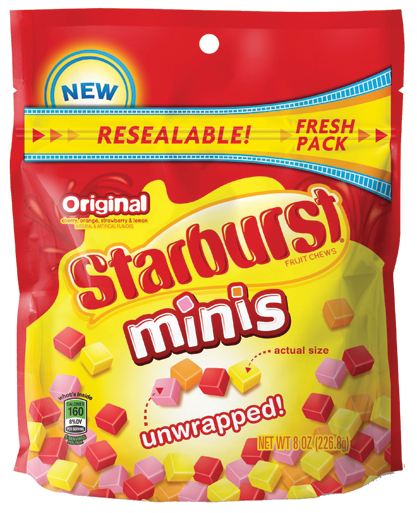 When asked if unwrapped candies support subconscious eating, Timothy LeBel, vice president of sales-grocery/value/military for Mars Chocolate North America, said that both sizes of Snickers Bites and Milky Way Bites represent more than a single portion, which it clearly presents on packaging. Mars Chocolate products are now 250 calories or less per serving, he added.

The offerings come at a time when 22% of consumers are eating less chocolate than they did last year, with 59% saying it’s because they’re watching their weight, according to Mintel’s Chocolate Confectionery report.

The Hartman Group’s Abbott said that although snackers are turning to chocolate as a reward, they’re doing so responsibly by opting for smaller portions.

A few years ago, marketers responded to consumer health cues with portion control 100-calorie packs. But in an effort to feel sated, consumers were eating three at a time, Abbott said.

“They were perceiving those as diet foods, and consumers are moving so far away from diet food and toward real food that supports weight management,” she said.

“It’s cuing to the consumer, ‘You’ve already eaten one short stack’, so in the consumer’s mind it adds value without pushing the message down their throat,” Abbott said.

When unleashed in the expansive candy set at Jungle Jim’s International Market, baby boomers often behave like, well, kids in a candy store.

“On any given day you’ll hear ‘Oh, I haven’t seen this candy in 30 years,’ then you’ll turn around and there is a cart full of ‘old’ candies,” said Marion Stricker, candy buyer for the two-store “destination” retailer, of its retro candy set.

“There is a general effort to take candy out of the world of kids, since marketing candy to kids is a no-no these days,” she said.

Wrigley, for instance, incorporated caffeine in Alert Energy Caffeine Gum, which it developed for adults and marketed to consumers 25 years and older, according to Wrigley. (Wrigley voluntarily paused production of Alert after discussions with the Food and Drug Administration regarding concerns about the proliferation of caffeine-added products.)

Candy makers are also opting for natural colors and flavors, like fruit juice.

“The confectionery with natural color is definitely less exciting to look at and it doesn’t turn one’s mouth that lovely blue or purple the kids love, but parents are happier with natural ingredients,” Mogelonsky said.

Companies are also innovating with dark chocolate — which trumps milk chocolate as the favorite amongst members of a single demographic — consumers over 55, according to Mintel.

“I actually have a 90% [cocoa] bar from Lindt and an 86% [cocoa} bar from Ghiradelli. If most people took a bite they’d spit it out because it’s really bitter, but there is a market for them,” he said.