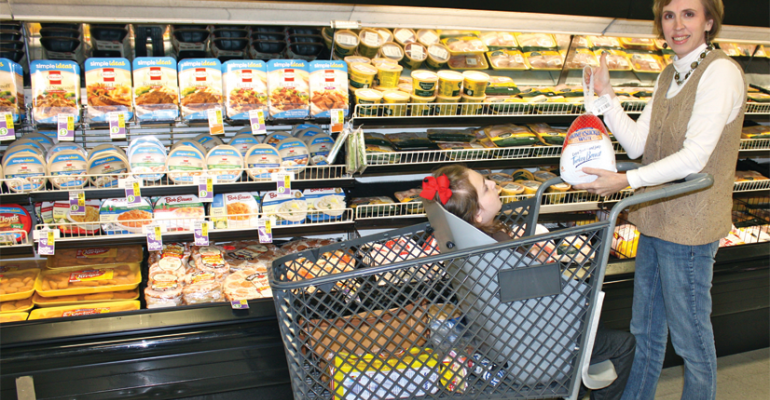 &ldquo;This cart is fantastic! [It] makes shopping with our non-mobile daughter a breeze. I hope that other grocery stores realize this cart is a necessity for families that have someone with a disability.&rdquo; &mdash; Michele L. Boroughf, a parent of a disabled child in Northbrook, Ill.

Caroline Long, age 12, has Rett syndrome, a severe neurodevelopment disorder that has left her unable to walk or use her hands since she was about 13 months old; she is unable to speak.

Her mother, Drew Ann Long, who has two other children, has tried to make Caroline feel included in everyday life activities, including grocery shopping, in their hometown of Alabaster, Ala., a suburb of Birmingham. Until Caroline was about 6, her mother would use a traditional shopping cart or a “fun cart” — the shopping carts designed to carry small children — to transport her around their local supermarket. But when Caroline outgrew those carts, Long was often left with the unwieldy task of pushing the child in her wheelchair while pushing or pulling a standard shopping cart — not a feasible option.

“I would have to find a sitter for Caroline, bring someone with me to push her wheelchair, or take her shopping with me and only purchase what I could carry while pushing her wheelchair,” Long writes on her website, www.carolinescart.com.

Frustrated with this dilemma, Long, then a full-time mom, wondered whether there existed anywhere in the world a shopping cart that could accommodate special-needs children — and even some categories of disabled adults. After extensive research indicated that such a cart did not apparently exist, Long, with support from her husband, David, decided to invent one — what is now known as Caroline’s Cart.

Following an arduous and costly four-year process in which Long overcame a multitude of challenges — such as designing the cart, applying for patents, finding design and manufacturing partners, starting a Facebook page, and learning the retailing and manufacturing industries — her manufacturer began shipping the initial carts to retailers on Oct. 9, 2012. By sheer coincidence, that was Caroline’s 12th birthday. In mid-October, Caroline had her first experience riding in the cart; her reaction was “total excitement,” said Long.

For Long, what began as a desire to address her own personal dilemma has evolved into a commitment to helping other families in her position — a significant segment of the U.S. population. “I decided this was just a huge unmet need, and needed to be addressed,” she said. “If a retailer is going to provide a fun cart as a convenience item [for children who can walk], what about the huge underserved population that doesn’t walk? We had no options, so this had to be done.”

Overall, of the 53.9 million school-aged children (aged 5 to 17) in the U.S. in 2010, about 2.8 million (5.2%) were reported to have a disability — including ambulatory, self-care, vision and hearing difficulties — that may require special accommodations, according to the U.S. Census Bureau. In addition to Rett syndrome, the particular childhood disabilities Caroline’s Cart can accommodate include autism, muscular dystrophy, cerebral palsy and Down syndrome, as well as adult afflictions like Parkinson’s disease and Alzheimer’s disease.

Long has inspired interest in Caroline’s Cart among consumers — many of whom have asked their food retailers to offer it — via a Facebook page (Facebook.com/CarolinesCart), which had 6,653 fans last week. “I knew if I could get this cart in the hands of moms and dads who live with a special-needs child, it would drive demand,” she said.

For Todd Hartley, district manager of Belle Foods, whose youngest son has cerebral palsy, stores with Caroline’s Cart are creating a place for families with special-needs children that “welcomes them and wants them to come shop,” he said in a video about Caroline’s Cart.

Reasor’s introduced Caroline’s Cart at the opening of its new flagship store in Bixby, Okla., on Oct. 31, and now has one cart in each of its 17 stores in eastern Oklahoma.

Reasor’s became aware of the cart after being contacted on its Facebook page by a shopper who “let us know about the product and how it would help them as parents of a special-needs child to include their child in the shopping experience,” said Kenny Perry, the chain’s director of advertising and branding. “We’re always looking for products and services that define Reasor’s as the best place to shop.”

The carts are used three to four times a week, “but as the awareness grows so should the usage,” said Perry, adding that the chain plans to begin promoting the availability of the cart. Shoppers mostly bring disabled children into a store by wheelchair, but they can call Reasor’s customer service desk when they arrive and an employee will meet them at the handicap parking area with the cart.

Shoppers who use the carts “are very appreciative and quick to point out how hard it was to push a wheelchair and a grocery cart while shopping,” Perry said. Reasor’s expects the cart to “garner incredible brand loyalty from the special-needs community and those sympathetic to this issue,” he added.

Under Hy-Vee’s decentralized management policy, store directors can make equipment purchases for their individual stores. Andrew Yochum, store director of a Hy-Vee in Lawrence, Kan., decided to purchase one Caroline’s Cart in late November after hearing about it from “a great customer with a child who is physically handicapped,” he said. “It’s difficult for her to shop with the child and she’d love to.” So far, with just word-of-mouth publicity, the cart has been used by 10 to 15 customers per week.

Yochum sees the cart cementing the loyalty of shoppers who use it. “Companies do all these things to create loyalty, spending millions on rewards and advertising,” he said. “I spent $900 on a cart and probably got 15 customers who won’t shop anyplace else.”

The cart, he added, “holds quite a bit of groceries. You’re able to get a weekly shopping done.”

Michele L. Boroughf, a parent of a disabled child in Northbrook, Ill., praised her local Sunset Foods store for offering Caroline’s Cart. “Before Caroline’s Cart, we always worried about our daughter falling out of a traditional shopping cart or our only other choice was to push her in a stroller,” she said. “This cart is fantastic! [It] makes shopping with our non-mobile daughter a breeze. I hope that other grocery stores realize this cart is a necessity for families that have someone with a disability.”

Long’s patented design for the cart — which she began on napkins on her dining room table and was later engineered by Indesign, based in Indianapolis — includes a number of features that help keep special-needs children secure during a shopping trip: a slight, 13-degree tilt allowing for low muscle tone; an abductor (hump) in the front of the seat to prevent the child from sliding forward; a five-point harness; a brake to render the cart stationary; front handles that swing open; a platform below the seat that provides a footrest; and six wheels to distribute and stabilize weight and allow maneuverability.

In addition, the seat faces the caregiver, so eye contact is easy to maintain. The cart’s seat is large enough to also accommodate a disabled adult who weighs up to 250 pounds.

Caroline’s Cart costs $850 per cart, not including shipping, with volume discounts available, which puts it “slightly more than a fun cart and less than an electric scooter,” said Long.

In Long’s initial manufacturing run of 100 carts, the seat was manufactured by Innovative Composite Solutions, Birmingham, Ala., with the complete cart assembled by Southern Perfection, Byron, Ga. Long is currently negotiating a manufacturing and marketing contract with Technibilt, Newton, N.C., a major shopping-cart maker.

“She was blown away,” Long said.

Long plans to testify before Congress this year on the importance of Caroline’s Cart, and to advocate for incorporating the cart in the Americans with Disability Act.

Long has also been supported by Chicago-based Easter Seals, the disability services organization, which made Caroline a national ambassador in 2012.

“We know that kids with disabilities are still not fully included and a lot of times they’re not visible,” said Sara Brewster, vice president of marketing for Easter Seals, which has provided services through its Birmingham chapter to Caroline since she was 13 months old. “Caroline’s Cart makes it possible for kids to be visible in their community and for people to see and interact with them. It makes communities more inclusive and gets rid of the labels and stigma.

“We would love to see at least one Caroline’s Cart in every supermarket. There are hundreds of thousands of kids who would benefit.”

When Caroline Long — the girl who inspired the creation of the Caroline’s Cart shopping cart for disabled children and adults — was born in October 2000 she was a perfectly healthy baby. “She passed all the tests,” said her mother, Drew Ann Long.

But at age 13 months, she began to regress physically, losing the ability to toddle around or use her hands, and was no longer able to speak. She had Rett syndrome, a neurodevelopment disorder that affects one in 10,000 children, almost exclusively girls. Caroline, whose mental functioning will never be age appropriate, can use her eyes to answer yes or no questions.

Long described Rett syndrome as “a spontaneous genetic mutation; it’s not hereditary — it could happen to anyone.” Its cause remains unknown.

And yet Caroline has a good life, said Long. The middle of three children, “she goes to school; she’s happy. She recognizes me, and she knows her friends and her pets. It certainly could be worse.”