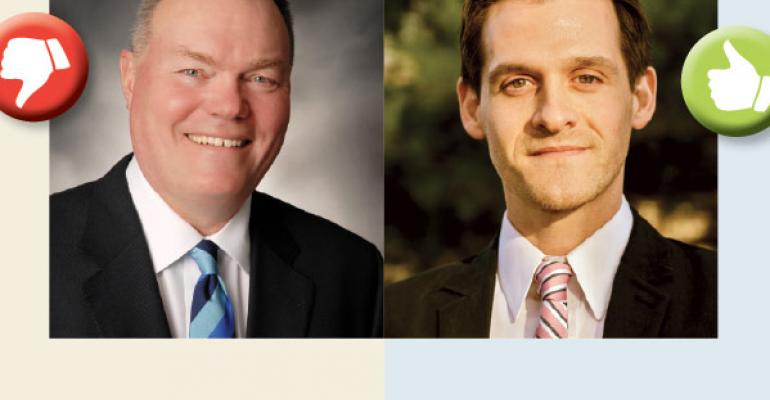 Q: What is your position on mandatory country-of-origin labeling (COOL) for meat? Country-of-origin labeling rules for meat were signed into law under the 2002 Farm Bill, but the debate over whether they are needed has never subsided. In fact, it&rsquo;s now accelerating because of recent government modifications that add to the requirements. Opponents claim mandatory labeling is unnecessary and burdensome, and hope COOL will be repealed. Proponents contend COOL offers transparency that benefits consumers and retailers.

Country-of-origin labeling could be an opportunity minus the “M-word”: mandatory. Meat and poultry processors voluntarily provide information when the market reflects demand for such information. Experience, however, tells us that COOL isn’t important to most consumers.

USDA used to offer voluntary COOL but no company used it because there was no demand for it. Since mandatory COOL started appearing on packages it’s had little impact on demand. Researchers found that only 23% of respondents knew about COOL and that consumers valued meat labeled “Product of North America” and “Product of the United States” equally.

Let’s be clear. COOL is not about food safety; even USDA says so. COOL’s strongest supporters are U.S. livestock groups that want to keep Canadian and Mexican beef and pork out of the U.S. Meanwhile, mainstream American livestock organizations oppose mandatory COOL because they see it for what it is — a nontariff trade barrier that hurts producers on both sides of the border.

Mexico and Canada saw the law similarly and filed a complaint against the U.S. The WTO agreed and ruled in their favor. Rather than fix it, the U.S. made things more burdensome by requiring specific details about where an animal was born, raised and slaughtered — changes that prompted Canada and Mexico to renew their case and changes that won’t satisfy the WTO.

To comply, some companies have changed their livestock procurement practices to avoid the segregation costs and record-keeping. These changes hurt many livestock producers on both sides of the border.

Opportunities in the food industry often arise when a company offers something unique. Mandating burdensome COOL on every package makes the information added “noise” for most consumers. Having shown little interest the first time, it’s absurd to think they will show more interest in a lengthier itinerary.

Making COOL voluntary offers the opportunity to provide information to consumers who care and offers an opportunity and a path to restore credibility with our trading partners, the WTO and consumers.

In this ultra-connected world, transparency reigns supreme. More than ever before, shoppers looking for meat and eggs are transitioning to products with labels that describe the products’ origins. Labels like “cage free” and “free range” or “pastured” are commonplace. And savvy companies are marketing around these types of programs.

Transparency also benefits retailers. For example, when supply chain scandals hit, it helps retailers to have more — rather than less — information immediately available to them about the origin of the products. Salmonella recall? E. coli infection? Illegal labor practices? Animal abuse? These are issues that food retailers work hard every day to address. The more tools in their toolbox, the better.

Country-of-origin labeling (COOL) can be one of those important tools. In fact, this type of labeling is already required for almost all other products imported into America, and has been for more than a century. Meat has been the exception, not the norm.

The COOL platform for meat simply requires that meat product labels tell consumers where the animals came from. COOL also prohibits mixing meat from animals from different countries in the same package at retail, which ensures that consumers can trust the origin label to accurately reflect the contents of the package. The National Farmers Union, Organization for Competitive Markets, United Farm Workers of America, Consumers Union and independent farmers and ranchers nationwide support the COOL program.

America has one of the most robust food systems on the planet, and transparency and accountability lead to consumer confidence and higher production standards. In an increasingly global meat market — where animals are often born in one place, raised in another, slaughtered and then processed in yet another and distributed across thousands of miles and many borders — having access to information about these products’ origins has become a must-have for many consumers, and is a business imperative for retailers.