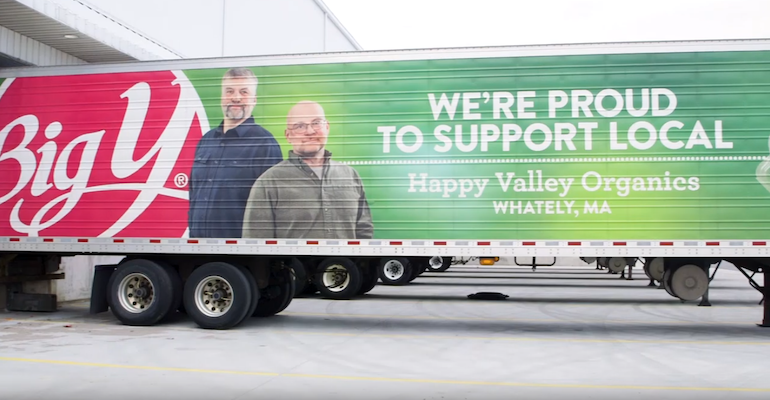 Big Y Foods
Big Y now provides local farmers and food producers with a one-stop site that saves them time and money from having to deliver to individual stores.
Product Categories>Produce & Floral

Through the nearly 425,000-square-foot DC, 70 farmers — representing more than 9,000 acres of farmland in the region — supply Big Y store in Massachusetts and Connecticut with 1,200 types of native fruits and vegetables annually. The $40 million facility, which operates 24/7, is expected to fully open in early 2021.

In announcing the Fresh & Local Distribution Center yesterday, Big Y said it now provides local farmers and food producers with a one-stop site that saves them time and money from having to deliver to individual stores. The DC also has state-of-the-art technology and temperature controls to help Big Y better maintain freshness for its shoppers.

As a result, corn picked in the fields in the morning can be in stores by the afternoon, and “fish may have been swimming in the ocean on one day and in stores by the next morning,” the supermarket chain said, adding that it supplies each of its stores with fresh fish six days a week.

“Having a Fresh & Local Distribution Center puts us in a position to really support our communities, our local farmers and our local producers. It allows us to accommodate a whole variety of things — from Millie’s pierogis to La Fiorentina bakery products — in one facility, not only having it fresh but then being able to keep it fresh and deliver to our customers at that peak of freshness,” said Charles D’Amour, president and CEO of Big Y Foods.

“The other thing is that we’re able to identify where it’s coming from — the farms,” D’Amour said. “I think that’s becoming more important to customers. So we just don’t say that it’s ‘local.’ We say it’s from Meadowbrook Farm in East Longmeadow [Mass.] or it’s from from Calabrese Farms in Agawam [Mass.]”

Big Y said it has more than 500 partnerships with local farmers, and over 3,000 products from local food producers can be found at a typical Big Y supermarket. The company noted that it actively searches for new craft food artisans to bring into their stores and can provide support for marketing and packaging, as well as with barcodes and advice on such business issues as insurance.

“Big Y has been so instrumental in the local community,” John Burney, owner of Meadowbrook Farm, said in a statement. “They have enabled me to continue to grow my business and put 99% of my profits back into the farm to keep providing customers with locally grown produce.”

Besides helping local farmers and producers prosper, the partnerships aid in the preservation of farmland and open space in the region’s communities, Big Y added..

“It gives me a lot of pride and excitement to help incubate these smaller businesses and help them to grow and become successful,” said D’Amour. “It’s a great partnership, and I think it makes that connection with the community, which is so important. It’s been part of who we are from the very beginning.”