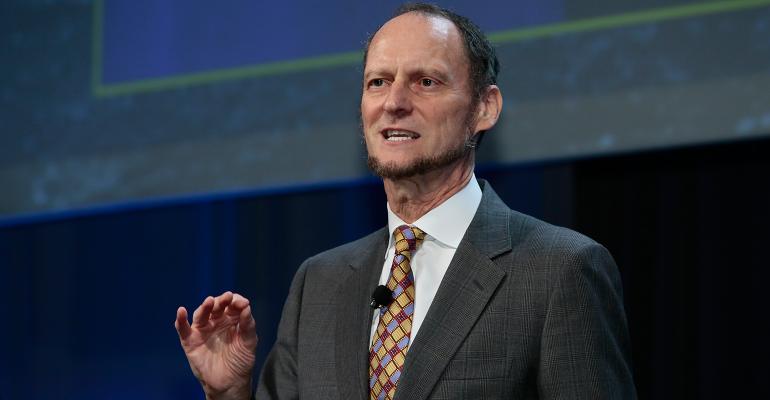 During his more than three decades with the Produce Marketing Association (PMA), Bryan Silbermann has watched the industry make dramatic changes in everything from technology and packaging to training and global sourcing.

Silbermann, who plans to retire in January after more than 33 years with the Newark, Del.-based association, will provide his final “State of the Industry” presentation during PMA’s Fresh Summit Convention and Expo Oct. 14-16 at the Orange County Convention Center in Orlando, Fla.

Silbermann was named PMA president and CEO in 1996, succeeding Bob Carey who had served in that role for 38 years prior. Supermarket veteran Cathy Burns, hired as PMA president in 2013, will succeed Silbermann as CEO.

“This is an industry that — once you really get immersed in it — it is incredibly hard to get out of,” Silbermann said, adding that he had planned only to stay for a few years and then return to a career as a professional musician.

“It gets into your system,” he said. “It’s the pace of the industry, the passion of the people, is very, very contagious. I didn’t expect that when I joined, and I’ve been thrilled by it ever since.”

Silbermann talked with Supermarket News about his plans, changes he has seen in produce marketing over the past three decades and what he anticipates on the horizon for the industry.

Excerpts from SN’s interview with Silbermann, edited for length and clarity, follow:

Supermarket News: What are your plans after retiring from PMA in January?

Bryan Silbermann: I will not be staying in the industry or consulting. Thirty-three-plus years ago when I joined PMA, I thought it was a fairly short-term thing. I was going to go back to what I really loved, which quite honestly was music. I used to be a professional musician. One of the key things I plan to do when I retire is to go back to playing music again — for fun, not for income. I’m going to combine that with my love of travel. I want to go to all 50 states and play with bands in every one of those states as well as other countries around the world.

SN: What is your musical specialty?

BS: I was a professional percussionist and drummer. I played in the symphony orchestra in South Africa. And I played with a number of musicians in different genres in South Africa, England and Chicago.

SN: Music aside, what do you see as the biggest themes in produce marketing this year and on the horizon?

BS: Clearly, we are seeing more value-added convenience items. You continue to see that everywhere in retail, from new packages to microwavables. Spiralized vegetables as a pasta substitute, especially for people who are trying to eat gluten-free, are a big trend. The whole premium juice category continues to grow.

Within the value-added category are what I would call the different textures that processors are providing to consumers. The spiralized veggies are one good example of that. Some of the old staples like cauliflower or Brussels sprouts have exploded in the last couple of years with the industry providing them in textural variations. Cauliflower now comes in little crumbles that you can use as pizza topping or in salads or as a potato substitute. Brussels sprouts that are shaved provide a very different texture and feel when you eat them than a typical Brussels sprout that your mom may have cooked.

It’s that use of processing technology and convenience to provide a textural context for the vegetable in salads and cooking. That’s definitely a big trend.

SN: What will attendees at Fresh Summit this year be most interested in?

BS: New marketing initiatives. People always want to see what the new marketing leaders are doing. Definitely there will be continued global presence — sources of supply — and also new markets with Chinese retailers and other new opportunities. We will have buyers from all over the world. The educational program will continue to attract a lot of attention … on trends, on food safety, new technologies, developing talent.

Produce marketing, then and now

SN: How many attendees are you expecting at Fresh Summit?

BS: Total attendance in Orlando we expect to be over 20,000.

SN: How does that compare to when you started with PMA?

SN: What have been the biggest changes in produce marketing since you started with the organization?

There was no such thing as value-added back in 1983. You think now about bagged salads came in the late ’80s and early ’90s. Cut vegetables. That is a new category driven by new technologies, machinery and packaging. That has changed the way the produce departments of today look versus those of 33 years ago. There is more refrigeration in the departments, more vertical displays to make use of the space. All of that has been a response to providing a chilled environment to treat those foods as ready-to-eat foods rather than commodities. Back in ’83, it was still a commodity appearance in the produce department.

Berries are now the single largest category in produce. Back in 1983, very few berries were sold in packages. They used to be sold in bulk or in a green plastic punnet where the strips of plastic cut into the berries and ruined about a quarter of them. Now you have things being sold in clamshells. They are much more sanitary, offer far better quality control and protection of the product and much better marketing opportunities.

And there are far more varieties of produce that weren’t available back then. It’s fair to say in 33 years we’ve doubled the number of varieties … of what was sold in the typical department.

SN: What do you see as the biggest challenges on the horizon for fresh produce and floral?

BS: I think it’s to treat marketing as a discipline and not an afterthought. That’s going to be a major push for PMA in the years ahead after I retire. There are market leaders who use some of the same types of marketing strategies and tactics as you see in consumer product goods that you see in the cereal aisle or the beverage aisle of the supermarket. The whole industry is in a transition from being a production-driven industry to more of a marketplace — and consumer-driven one.

There will be continued attention to food safety. We absolutely have to continue to make the type of progress that we’ve made in the last five to seven years on that.

And we need continued attention to telling our story, whether it’s talking about the kinds of labor practices that we have in the industry, the positive messages we have about employment of people, the dignity of jobs, the family farmer. All of that is important.

We all have to be extremely careful that the kinds of horizons that are typically required to generate decent returns in produce aren’t somehow negatively impacted. It’s happened before.

The industry is susceptible to weather conditions. It’s not as though you are in a production line with a predetermined production schedule and ROI over a period of years. You’re going to have swings, peaks and valleys for pricing. We have to pay attention to that. And we have to make sure people investing don’t upset the apple cart, so to speak.

BS: There are no ugly babies. I pretty much love everything. But in particular I love tropical fruits. Nothing appeals to me more than a tropical fruit salad, so things with lychees, mangoes and papaya. Those are all favorites of mine. In vegetables, aside from a great salad with a nice vinaigrette, I do like asparagus, and I like most of the cruciferous vegetables prepared with interesting flavors. To me, that’s the real key.