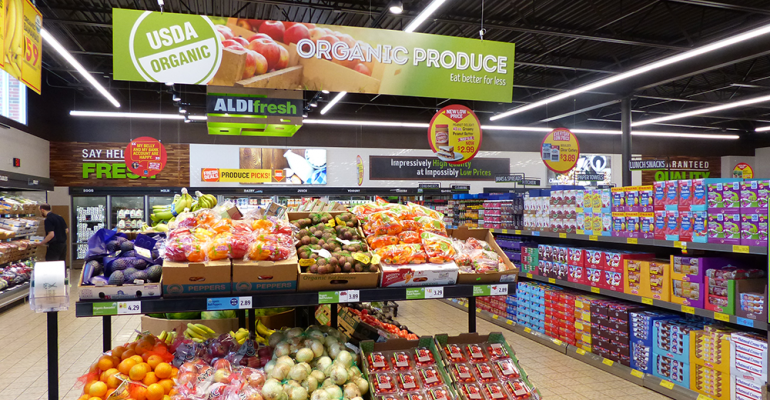 Sales of organic fresh produce advanced 8.6% to $5.6 billion last year, according to data from the Organic Produce Network (OPN) and Nielsen.

Related: In produce, local is hotter than ever

Related: In produce, local is hotter than ever 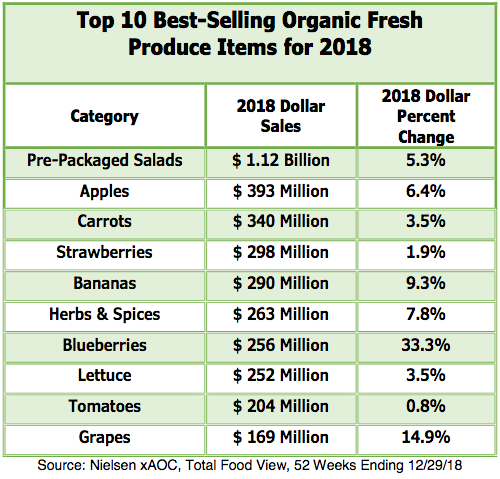 “Although organic accounted for 10.1% of total produce sales, it’s driving a disproportionate amount of growth within the produce department,” Matt Lally, associate director at Nielsen, said in a statement. “In total, 43% of total produce growth occurred from organic items, which equates to an additional $450 million sold.”

“What’s especially interesting about the 2018 numbers is an impressive two-thirds of all produce commodity groups increased organic sales year over year, which indicates this is not an isolated incident,” explained Matt Seeley, CEO of the Monterey, Calif.-based Organic Produce Network. “Perhaps most importantly, organic growth occurred in these three categories despite a decline in conventional sales.”

Still, OPN and Nielsen noted, fresh produce offerings bearing the “organic” label doesn’t guarantee their success in produce, as conventional items in categories such as strawberries and tomatoes saw much greater sales growth. 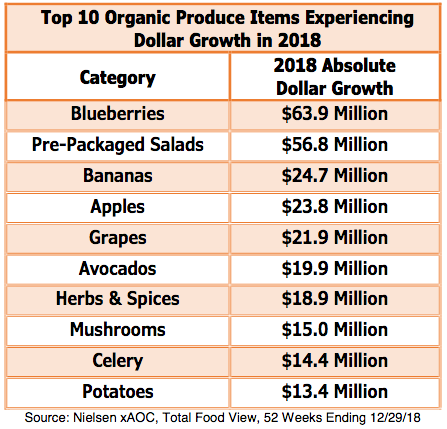 “When you compare this difference with commodities that experience a high organic growth rate such as grapes, the difference is striking,” according to Tally. “Grapes rang in at $2.18 per conventional pound compared to $2.94 per organic pound. Clearly, here’s a strong connection between the growth of organic and the price premium with its conventional counterpart.”

Besides strawberries and tomatoes, other fresh organic produce categories with growth potential include onions, bell peppers, watermelon and mandarins, which remain “disproportionately underrepresented” in organic sales versus the total produce average, OPN and Nielsen said. One way to reach more organic shoppers with these items, they added, is to ensure that product is readily available, especially during key sales periods like summer holidays, Thanksgiving and Christmas.