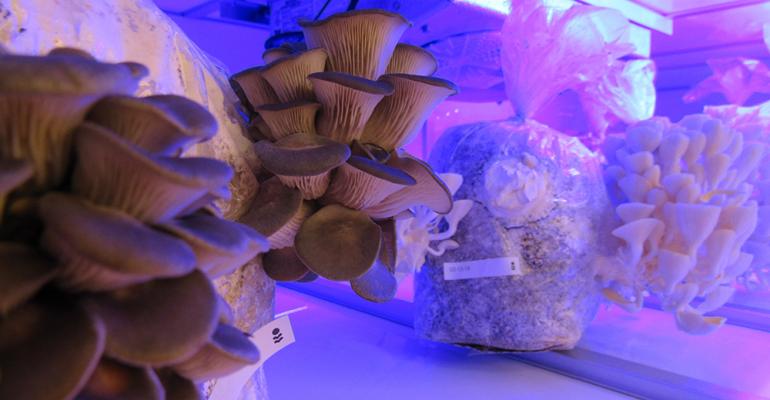 When designing the new Whole Foods location in Bridgewater, N.J., the company created an expansive produce department and carved out space for something a bit different: a mushroom farm.

"We think the farm will add a level of innovation and intrigue that customers will find very interesting,” said Chris Manca, Whole Foods Market’s local program coordinator for the Northeast region. “These mushrooms will also be the freshest possible produce that you can buy, and we know our shoppers will be excited about that.”

The farms are the creation of Smallhold, a new company out of Brooklyn, N.Y. The company’s mini farms can be found in a handful of restaurants, but Whole Foods is the first retail partner. The farm in the Bridgewater location will produce about 120 pounds of mushrooms every week, but the farms can be much smaller depending on need, said Adam DeMartino, co-founder and COO of Smallhold. “Essentially, we need as little as 4 feet by 2 feet square footage,” he said. “It depends on how much you're going to sell.” Whole Foods hopes to install another farm in one of the company’s Brooklyn locations later this year. Whatever the size, Smallhold’s vertical farm units are meant to be seen, said DeMartino. “It's a glowing box. It has lights in it. It attracts the eye. It attracts people to the produce aisle. And kids love it.”

Manca agrees. “The growing unit is so unique and beautiful that people will inevitably be very drawn to it,” he said. “Our job will be to educate people about what we are doing, and we expect they will be very interested in purchasing some of the mushrooms to take home and try.”

Logistically, the mushrooms are initially grown in nearby farms, including one run by Smallhold, and brought to the mini farm during the last stage of growth. Once the mushrooms are ready, a store or Smallhold employee bags the mushrooms and puts them on nearby shelves where customers can grab them. Smallhold’s technology monitors the environment and gathers data on temperature and humidity. The company can also gather market data and see which mushrooms are selling. At the Whole Foods location in New Jersey, the farm is growing three different kinds of oyster mushrooms – yellow, blue and pink. Smallhold started with mushrooms, in part, because “we looked for high-margin, high-output crops, and mushrooms were the natural ones to land on,” said DeMartino. Mushrooms are also tricky to transport and have a short shelf life, both problems the mini farms eliminate. These benefits afford retailers the ability to price their mushrooms at a lower price per pound, DeMartino said.

“This is a direction that not just produce, but food in general is moving,” he said. “There's definitely a renewed focus on healthy produce, there's definitely a desire for local, but we need to make that affordable. And basically, that's what we offer. In addition, [you get] the marketing value of having produce grown on-site.”

DeMartino said the company plans to expand to other retail locations and beyond.

“Our goal is to start with Whole Foods, but the applications for this, because it's a remotely operated farm, reach beyond even groceries stores,” he said. “We see these as being useful in many applications, for instance, where people don't have arable land. And so, the ultimate goal of Smallhold is to get the price of local produce down to an affordable price for people.”