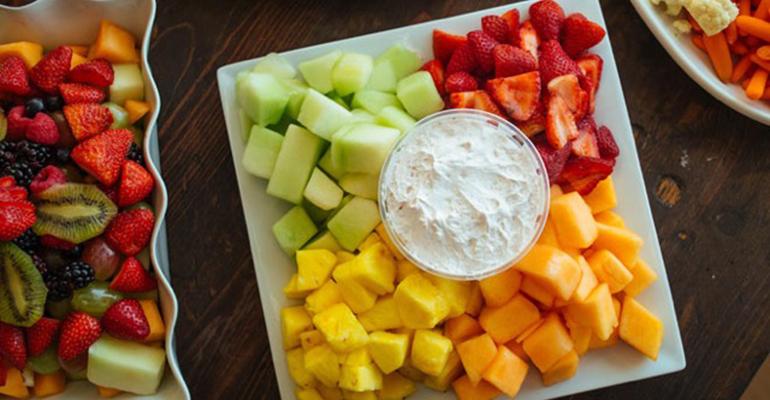 Tips include trialing and adding options next to commodity counterparts

From juicing kits to precut peppers and onions, bags of cubed squash to squeezable tubes of garlic, value-added produce has proliferated in all sorts of clever and useful ways over the past few years. Retailers keen on appealing to convenience-focused produce shoppers now have hundreds of different options to choose from.

The question is: How do managers zero in on top performers?

According to sources, it’s best not to over-complicate the issue. Despite the plethora of value-added choices, only a small percentage truly resonates with consumers. The key, retailers say, is to focus on trending ingredients and practical, innovative solutions.

At Harmon’s Grocery, Salt Lake City, the top performer in value-added produce right now is a line of bagged chopped salads accented with eye-catching ingredients like pomegranates, sunflower seeds, bacon and bleu cheese. Robert Seegmiller, produce manager for the 17-store chain, said the salads have a healthful, on-trend appeal. Moreover, they tackle a process that can feel daunting to his time-pressed shoppers: assembling a salad.

“It used to be value-added produce was viewed as being for mostly higher end consumers,” Seegmiller said. “But time is money, and I think we’re digging deeper to where it is a real value to have these items on the go.” “I like to give new products a chance,” said Smart. “We’ll set up a sampling station, promote it, and see if it’s successful with our customers. If it does very well, I’ll continue to carry it at my store.”

Some items recently trialed include recipe-ready cut vegetables, bagged fajita veggies, stir-fry mixes and diced onions, which are “huge at my store,” Smart said. “[Shoppers] want that work done for them. They come in, grab it off the shelf and they’re happy.”

Considering the opportunity at hand, frequent trialing is understandable. According to Nielsen data, between 2011 and 2015, value-added fruits and vegetables saw compound annual sales growth of 8% and 10%, respectively. In last year’s second quarter — the most recent quarter for which sales data is available — all categories of value-added produce, including snacks, meal prep and side dish items, saw double-digit dollar growth.

Beyond the numbers, retailers see in value-added a chance to drive growth and draw new shoppers to the department.

“While produce as a whole is growing, innovative categories such as value-added fruits and value-added vegetables are significant growth engines,” said Jennifer Campuzano, director with Nielsen Perishables Group.

At Festival Foods, Onalaska, Wis., shoppers are gravitating toward trendy takes on some traditional favorites. Produce manager Tad Comeau pointed to vegetable pasta and bagged cauliflower crumbles, which can be added to salads and other dishes, as top-selling items. Fresh salsa and guacamole is also popular right now, he said, as are chopped salads.

“The chopped salad trend has really brought some more life to the bagged salad category, and we promote those frequently now,” said Comeau.

To further cut through the clutter and select the best value-added produce items for each market, sources recommend tracking sales of stacked produce to see what’s trending. Cauliflower, for one, showed promising growth metrics several years ago, prompting retailers along with manufacturers like Green Giant to develop cauliflower crumbles, cut varieties and other choices. Fueled by these innovations, overall sales of cauliflower grew 8% yearly between 2011 and 2015, per Nielsen data.

Patrick Morris, produce director at Rouses, Thibodeaux, La., said growing interest in Brussels sprouts and kale prompted him to bring on value-added varieties of each item. He likes to merchandise choices like steam-able, bagged Brussels sprouts next to their commodity counterparts.

“The customer looks at it, and they have that choice in front of them: Do I want to cook or do I just want to heat it up?” said Morris.

Seegmiller also likes to merchandise like items together, such as cubed pineapples with whole pineapples and watermelon slices next to whole watermelons. Harmon’s also merchandises cut fruit in a standalone display, with sizes ranging from 8-ounce meal sides to 3-pound cases big enough to feed a party.

At the same time, sources acknowledged it is possible to have too many value-added selections — that all those bagged, boxes and shrink-wrapped products could cut into the fresh appeal of the produce department.

“At some point too many choices would become overwhelming for any shopper,” said Comeau. “I’m not sure what the right mix is, but I don’t think we have hit the ceiling yet.”