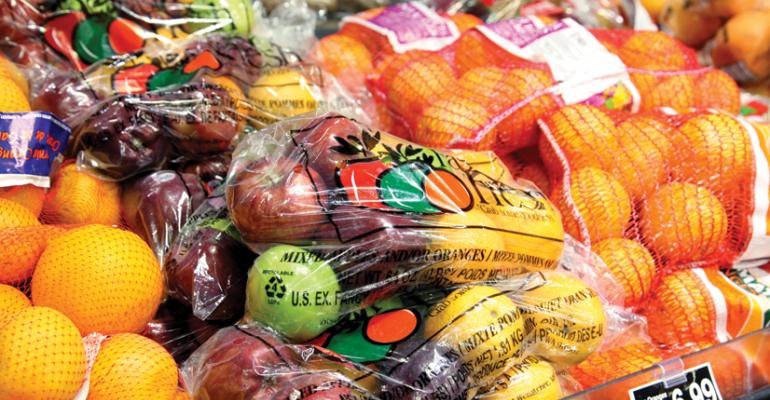 <p> &quot;Most of our packaging is custom-tailored to the item by the supplier,&quot; says SVP David Krause of Brookshire Grocery Co.</p>

Apple’s Got a Brand New Bag

Where once it was unusual, packaging in the produce department is today a typical sight in most supermarkets.

Now, new technology and customer preferences are leading to different varieties of produce being sold in packaging, while new types of packaging address issues of messaging and sustainability.

“Packaging has come a long way, night and day, from where it used to be,” said Brian Gibbons, produce/floral director at Highland Park Market, Manchester, Conn.

“Now we go with the safety seal, which is really good. It’s tamper resistant. People can’t get into it, which customers seem to really appreciate, especially when you’re talking the cut items that are ready to eat, which is any kind of fruit. It’s a little more expensive but I think it’s definitely worth it,” said Gibbons.

At Brookshire Grocery Co., Tyler, Texas, suppliers have updated the material and shape of containers over the years.

“Most of our packaging is custom-tailored to the item by the supplier. An example would be the modified atmosphere packaging on some cut vegetable items now, or the gusseted bags for grapes,” said David Krause, senior vice president, category management.

Modified atmosphere packaging is one technology that has enabled suppliers to package up new kinds of produce, such as apricots and peaches.

“But because the produce is alive and respiring, the minute you put produce into a package, assuming it’s a non-vented package, then the produce is going to modify the package passively,” said Brandenburg.

Packaging up any types of fruits or vegetables that traditionally were sold as bulk presents its pitfalls. Retailers still need to monitor the packaged product.

“But one of the  challenges, because they’re used out in the portion of the supermarket that traditionally is non-refrigerated, condensation can be a big issue, inside the package,” said Brandenburg.

Not all consumers embrace the trend. At Highland Park Market, customers prefer to pick out their own vegetables.

“Over the years we’ve kind of gone away from that trend and actually gone loose on Brussels sprouts, asparagus, clustered tomatoes, that kind of thing,” said Gibbons.

About 10% of produce at Highland Park is packaged; much of it is done in-store.

“We do our own cut fruit program. And then also obviously buy pre-packed different tomatoes, salads, obviously, and some different — broccoli florets, stuff like that,” said Gibbons.

Although the number of available products source-packed by suppliers continues to grow, “for us that’s not really the way to go,” he said.

“The trend is definitely growing to pre-pack. I think a lot of that is for payroll reasons. It’s easier for somebody to pack out something that’s already packaged as it going loose. So there’s definitely more and more items available every month,” said Gibbons.

At Brookshire, where 25% of produce is packaged, there is a preference for source-packed items.

“We do package a few items in-store, including tray-packed corn, tomatoes, and occasionally snack packs of fruit, but the majority of packaged product is source-packed. A select few stores do process and package their own cut fruit and ready-to-eat vegetables,” said Krause.

Consumer demand for ready-to-eat and prepared or semi-prepared meals has led to changes in the packaged items Brookshire sells.

“With the trend towards ‘quick to fix’ and ‘grab and go,’ the majority of our packaged items are cut or processed in some way, which is a major change from how produce departments operated in the past,” said Krause.

Some suppliers are really shaking up the category in that area.

While reviewing the entries for the Produce Marketing Association’s Impact Awards (see Sidebar, next page) for produce packaging this year, chief science and technology officer Dr. Bob Whitaker said he saw a lot of products geared towards convenience.

“Number one is there seems to be a continuation of kind of kid-friendly packaging. So things that are easy for parents to be able to put into a kid’s lunch pail,” such as vegetable snack packs, said Whitaker.

Another novel item was packages of carrots with flavors like ranch or barbecue where the consumer would shake the bag to distribute the seasonings, he said.

In general, industry experts told SN that bags and stand-up pouches are replacing clamshells as preferred containers, a reversal of the trend in recent years.

One of the reasons is the bags provide more space to convey information.

“Certainly the real estate on the package is being used to deliver consumer messaging, recipes, that sort of thing,” said Whitaker.

That information can be beneficial to retailers, too, said Dawn Gray, founder of Dawn Gray Global Consulting.

“Can you get your message to the consumer more easily in a package? Absolutely. Let’s face it, most retailers are really strapped in terms of being able to educate their produce staff on 650 SKUs and what’s special about them and what do I do with it when I get it home. So I think it satisfies a number of their labor and education issues as well,” said Gray.

Retailers agreed that consumer education was a key advantage of the increased messaging.

“I’ve seen that trend a lot, too, which really helps. It’s not only that they have a product description. They seem to now tie in a lot of recipes and what to do with that item, whether it be tomatillos or something that you’re not really sure [what to do with],” said Gibbons.

Another benefit of bags over clamshells is increased sustainability.

“It was to reduce the amount of plastic that was used and to make these things more sustainable,” said Whitaker.

Most packages are now recyclable, and some are even made from recycled materials, Whitaker added.

At the same time, retailers and suppliers must be careful to not “green-wash” their sustainability claims.

“One of the challenges is that everybody climbs on to that bandwagon. And putting more seats in an airplane, people will claim, well that’s a sustainable solution,” said Brandenburg.

While produce packaging might appear to be the opposite of sustainable, the benefits usually outweigh any negative connotation, experts said.

“But I don’t see that desire to be green being a movement away from packaging. I think the education, the labor savings, the food safety, the merchandisability, if that’s a word, are stronger than any concerns about will I appear to be not friendly to the environment,” said Gray.

Some types of consumers will always prefer bulk for various reasons, but the trend towards more packaging isn’t slowing.

“And there’s a bit of a tradeoff between the ‘I want to touch it, smell it, squeeze, it, thump it’ crowd to ‘Well I really don’t want other people touching and smelling and squeezing and thumping the produce that I’m going to buy to consume.’ And I think that the tradeoff is veering towards packaging,” said Gray.

“Ultimately, customers want fresh produce. If the packaging adds to the freshness or the value of the item, they will support it.”

This year’s 25 finalists (listed alphabetically below), chosen by an independent pre-selection team in August, will be judged on marketing, sustainability, consumer convenience, food safety and supply chain efficiency/functionality by a panel of five industry experts.

Attendees of PMA’s Fresh Summit Convention & Expo in New Orleans will be able to view the finalists’ entries during the show Oct. 17-19. The winners will be announced on Oct. 18.