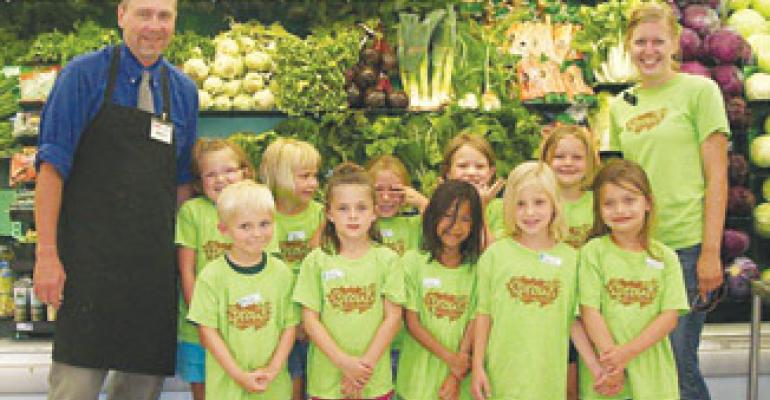 AUSTIN, Minn. — At a Hy-Vee store here, children regularly escort their Moms to the produce department, where they're persuading them to buy the likes of Swiss chard, butternut squash, even fresh basil and cilantro. Unusual for kids ages 3 to 9 to be so enthusiastic about choosing vegetables for a clutched-in-hand recipe?

Yes, but Hy-Vee dietitian Jen Haugen isn't surprised. This type of enthusiasm was exactly what she had in mind when she launched a kid's garden project, “Sprouts - Get Out and Grow,” early this summer in a plot next to this Austin, Minnesota store.

Meanwhile, other Hy-Vee stores are readying themselves to create similar projects.

“Such creative ideas usually come up at the store level,” Comer said. “And we encourage such projects [as the kid's garden] throughout the company where it's practical, where they have the land to do it.”

Comer pointed out that the project has multiple benefits for Hy-Vee and everybody else involved. “We believe in community outreach, and working with employees in new and different ways to do that. Also, research has shown kids will eat what they grow. So this is introducing them at a young age to vegetables and how good they are. Not only that, but the attention called to the garden brings more people into our store.”

Haugen told SN that when she was hired three years ago by Hy-Vee, she told officials that her dream was to create a garden for young children. After much planning and reaching out to organizations over the last year, Haugen put her dream into action this past June.

She partnered with the Austin Public School District to get their Summer Day Care students, ages 3 to 9, to participate. Everybody, including the kids, was enthusiastic, Haugen said.

“It was like a field trip for them. They were brought here to us by van, and they helped do everything in the garden. The garden, with raised beds, is 40 by 60 feet — and fenced in. So the kids are safe.”

To keep things simple and manageable, Haugen limited the classes to no more than 12 kids at a time, with two back-to-back classes once per week. The theme was Seed to Plate, and the youngsters started by planting seeds and tomato plants.

“We also taught them how to weed. We called that Plants and Robbers [weeds]. After identifying weeds, we asked them to try to find five robbers in the garden, and one little boy asked me if he could find more than five. They were all very involved from the get-go with everything we did. They were excited to be outside, but also very excited about learning.”

The vegetables the kids planted included some familiar ones such as green beans, carrots and zucchini, but Haugen made sure some of the plants were not so familiar. Swiss chard, acorn squash, basil and cilantro were on the planting schedule also. Even before harvest time, Haugen brought out some vegetables from the store's produce department and tried to see how many kids could, for instance, identify Swiss chard. It got 30% to 40% recognition, she said.

“Even some of the parents couldn't identify Swiss chard,” she said. But when harvest began, the results were particularly encouraging.

“We made a raw chard salad called Fruity Chardy with raw chard, sliced strawberries and cantaloupe,” Haugen said. “The kids really liked it. On an evaluation sheet, they had to fill out, 71% said they liked the salad a lot.”

The evaluation sheets, which were passed out after each tasting, presented three options for answers: “I like it a lot.” was one, “I like it a little,” another, and this significant wording: “I don't like it much yet.” With such a young group, the possibilities of recalcitrant reactions were there, but none were exhibited. Perhaps Haugen warded those off with her sub-theme, which was “Don't yuk somebody else's yum.”

She followed up with the kids by explaining that if anyone said, “yuk,” others might follow suit, and miss out on a good-tasting vegetable. During every class, the kids prepared something using the vegetables they were learning about. If the garden's vegetables weren't yet harvested, Haugen brought similar items out from the store's produce department.

“One thing that was a huge hit was squash pancakes. I couldn't believe it. My 6-year-old daughter wanted more.” Store Director Tom Hepler and others on the management team helped Haugen set up the garden on a green piece of property to the side of the store's parking lot.

“I have a great store director. Everybody was so helpful. We set up a hand washing station outside. I had a lot of help getting started. That was the hardest part. I felt a little like a general contractor. Austin High School's cabinetry class came out and constructed the raised beds, then the store director helped build the fence.”

“A DVD we made of this project over the summer was sent out to stores from corporate,” Haugen said.The Austin consumer media, too, has given Haugen's project a lot of attention. “We've been on the CBS, NBC, ABC affiliate stations, and in the newspaper several times,” Haugen said.The summer's garden work and learning culminated in a Harvest Party the last week of August to which parents were invited. Food stations were set up on picnic tables and several of the dishes the kids learned to prepare were featured. They included squash pancakes, spinach salad with lemony dressing, Swiss chard quesadillas, and smoothies.

“Everybody seemed impressed with what we'd done. We gave every family a recipe kit, with quick and simple recipes, a feedback form, and also some of the produce.” Any part of the crop still to be harvested will go right into the store's produce department for sale, Haugen said. She'll definitely do the project again next year. “In fact, I'm looking forward to it. We'll expand the project, too, and include more kids.”