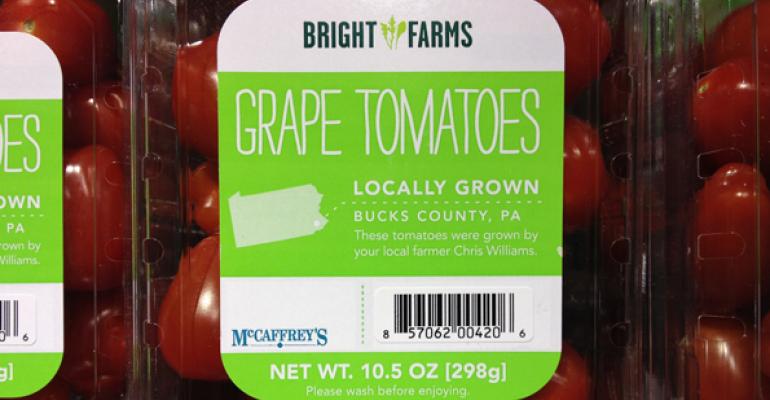 “We really featured them, and we had good sell through,” Tony Mirack, the retailer’s produce buyer and merchandiser, told SN after the weekend.

The tomatoes had the top spot in the produce aisle, at the beginning of the traffic path.

“It was a big display, the first thing customers saw,” Mirack said.

Mirack displayed the colorful tomatoes on a four-by-four Euro table. Grape tomatoes in clamshell containers, retailed at $3.99, were stacked on the front shelf of the table. The back shelf was covered with tomatoes on the vine, retailing for $2.49 a pound.

Large signs on the table and labels on the clamshells said, “Locally grown by BrightFarms for McCaffrey’s.”

McCaffrey’s has been sourcing the tomatoes, as well as a variety of baby greens, for the last few weeks from BrightFarms’ greenhouse located just down the road from its Yardley, Pa., store.

Earlier, the retailer had made a deal with New York-based BrightFarms to grow tomatoes and a selection of greens exclusively for McCaffrey’s at its nearby, 50,000-square-foot, hydroponic greenhouse.