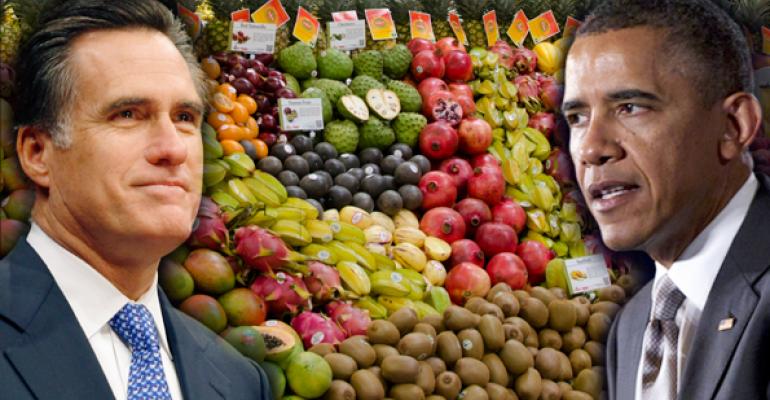 NEWARK, Del. — This week the presidential candidates responded to a set of questions submitted by the United Fresh Produce Association related to how the two hopefuls’ policies might affect the industry.

Keeping regulatory burdens at a minimum was the overall theme of the candidates’ statements related to agriculture regulation, with President Barack Obama and Gov. Mitt Romney noting the need to keep American farmers competitive in world markets.

That competitiveness also came into play in Romney’s statements on the Farm Bill; the former governor supports free market principles but said that government assistance is vital to farmers. Obama’s response on the Farm Bill centered on the need for programs that promote fruits, vegetables, nuts and organic crops as a means to keep Americans healthy.

On that subject, United Fresh noted programs established by First Lady Michelle Obama and the U.S. Department of Agriculture to promote fresh produce as part of a healthy diet and asked the candidates how they might build on such initiatives.

In his response, Obama advocated opening grocery stores in underserved neighborhoods, promoting education and furthering research on how to get Americans to eat healthier.

For his part, Romney acknowledged the importance of programs promoting a healthy lifestyle to combat obesity, but stated, “The federal government should not dictate what every American eats.”

On immigration, the Romney campaign specifically highlighted the need to streamline the visa application process for temporary agricultural workers so visas are issued in a consistent, timely manner. Obama, meanwhile, talked in broader terms about his efforts for immigration reform, including creating a path to legal status for undocumented workers and holding employers accountable.

The candidates agreed that government must work with the food industry on issues of food safety to reduce risk while not getting bogged down in regulations.

“I am committed to working to ensuring that food safety regulations do not place an unreasonable burden on the food industry,” Obama said.

Romney emphasized the need for the industry to be involved in the development of food safety best practices. “Governor Romney believes preventative practices are best developed by growers, handlers, processors and others in the supply chain with specific knowledge of the risks, diversity of operations in the industry and feasibility of potential mitigation strategies,” according to the statement.

United Fresh also asked about the “death tax,” which can have a significant impact on family-owned farms. Obama said he would return the tax rates to 2009 levels while Romney advocated a “full repeal” of the death tax.